Please be aware at all times of local and national regulations to ensure the safety of others and the sustainability of Game bird Hunting. 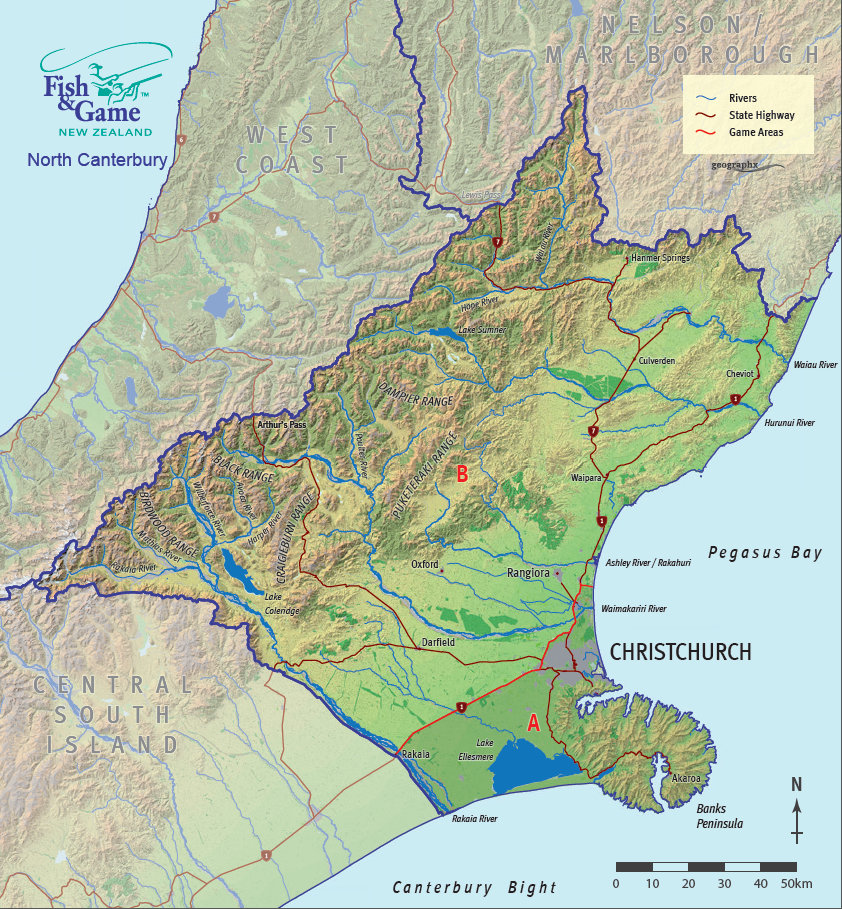 The North Canterbury Fish and Game Region stretches from the south bank of the Rakaia to the headwaters of the Waiau, from the Southern Alps to the sea. Habitats range from coastal dunes, through to shallow wetlands and wide river beds, high country lakes and mountain valleys. Mallard ducks are the most abundant and popular game bird in the region. They have adapted well to the developed agricultural land which dominates the North Canterbury landscape. Paradise shelduck is the next most popular species among local hunters and like the Mallard, also does well in developed land. The region also sustains a reasonable black swan population, most of which are found on coastal wetlands. Grey and shoveler ducks are found in the region but do not favour open, developed land and tend to be concentrated onto wet, swampy areas and irrigation storage ponds.

Upland game birds are less prolific than in some other Fish & Game regions but reasonable California quail numbers are present in the middle reaches of the braided riverbeds. Small pheasant populations are also present, but are not sufficiently abundant to withstand heavy hunting pressure. There is a two day open season for cock pheasant hunting on the second weekend in June in the North Canterbury region.

The North Canterbury region is a mix of public and private land. Most of the public land is administered by the Canterbury Regional Council and Department of Conservation (DOC). Either of these organisations, or North Canterbury Fish and Game Council, will be able to assist you with any access inquiries relating to public land.

An ‘Lake Ellesmere Access’ publication is available to assist hunters with access issues and is available from the Fish & Game office or the main hunting retail stores.

Here is a brief summary of the major hunting areas in the North Canterbury region:

Lake Ellesmere (Te Waihora), a 20,000ha wetland of national and international significance, is the major game bird hunting area in the region. Mallard ducks are the most popular quarry during the traditional hunting months of May and June, Black swan and Shoveler duck are also present. It is important to note that Lake Ellesmere is home to a large Grey teal population which are protected wildlife. It is important that hunters take time to properly identify their target, especially during periods of low light. The best time to hunt Ellesmere is during a strong southerly wind. Birds which usually roost in the middle of the lake are pushed off by the rough conditions and tend to fly to the downwind shore. The lake can also shoot well during strong northwest or northeast winds; once again the downwind shoreline is the best place to hunt. Lake Ellesmere has a good number of maimais located around the shoreline and most Ellesmere regulars have one of their own.

However, any hunter is free to use any maimai sited on public land which has not been occupied by 7:30 am in the morning. This is a great option for new or inexperienced hunters who want a taste of open water game bird hunting without having to commit to the time and expense involved in constructing their own maimai.

Please note that a permit is required to hunt on DoC managed land on the shores of Lake Ellesmere. These are available from the DOC Christchurch Visitor Centre at the Christchurch i-site 28 Worcester Bvd, Christchurch. Opening hours: 10am to 5pm everyday (closed Christmas Day), phone (03) 379 4082 or email christchurchvc@doc.govt.nz

The construction of permanent maimais on public land and Ngai Tahu lakebed at Lake Ellesmere are subject to a number of conditions. Approved maimai construction techniques are available on the North Canterbury page of the Fish & Game website. Hunters need to obtain permission from Fish & Game and the DOC Mahaanui District Office (03) 341 9100 prior to commencing work on a new maimai, however we encourage hunters to refurbish an unused existing maimai in the first instance. Hunters with existing maimais which have yet to be registered should contact staff at the Fish and Game office to obtain a maimai registration tag. There is no charge for these services.

The Rakaia, Waimakariri, Hurunui and Waiau Rivers are also popular hunting locations. Many of these rivers have large tidal lagoons which provide good hunting opportunities. Further upriver, ducks can be targeted using traditional decoy setups in open water areas. Good duck shooting is also available in places by flush shooting small springs and ponds, which are often found on the margins of major riverbeds. Licensed game bird hunters are able to hunt in most of the North Canterbury braided river beds except parts where they lie close to population centres. In some places ‘No Shooting’ signs are in place but the Canterbury Regional Council has assured Fish & Game staff that this relates to the use of rifles only. The Waimakariri River Regional Park, administered by Environment Canterbury, recognises game bird hunting as a legitimate activity, with areas designated for such use. An access map is available. Please do not shoot outside of these areas which may put the secure future of game bird hunting at risk. Hunters need to be aware of rabbit poisoning operations in Canterbury river beds. While poison operations are of little threat to humans or to the safe consumption of any game birds killed, it is of real concern to hunter’s dogs which are very susceptible to 1080 poison found in carcass remains, for some months after a poisoning operation.

Some of the region’s high country lakes offer good game bird hunting opportunities. In some cases hunting can be pursued without the owner’s permission but it is highly recommended that you put in the effort and talk to the farmer or manager concerned in advance. Please note that Lakes Grasmere and Pearson are wildlife refuges and all hunting is prohibited.