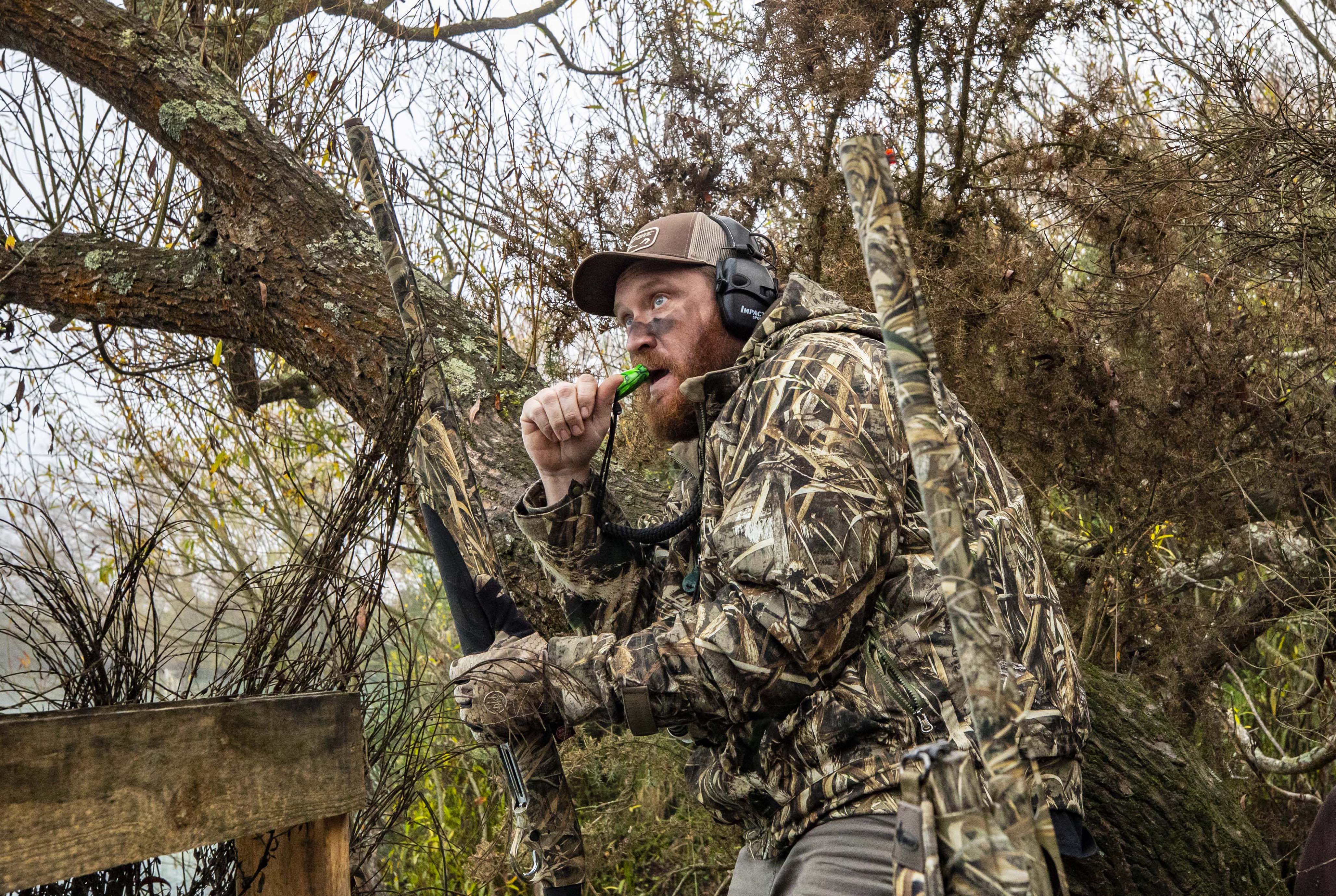 The game bird season in North Canterbury has just begun so over the next three months so get out there and make the most of the opportunities our region has to offer.

The weather forecast over the opening weekend was its usual trait of warm/still weather with little wind which isn’t ideal for our game bird hunters on Lake Ellesmere.

But the general report from our hunters about the weekend was all pretty good results despite the weather conditions with good numbers of birds around which is great to hear.

Our rangers were out and about checking licences throughout the weekend with most people being complaint and in some areas quite happy to see rangers out there as some hunters said they hadn’t been checked for quite a few years so it is good to see our rangers getting around and covering a lot of territory.

You can only harvest one cock pheasant per day.

Above Right: Paul Thomas calls in the ducks near Rakaia.

The staff here have recently made a couple of “How To” videos for gamebird hunting on Te Waihora/Lake Ellesmere for those that are new to the area or new to game bird hunting on public land.

Te Waihora/Lake Ellesmere is a great area to explore throughout the season and being not too far out of Christchurch, it offers some of the best public land game bird hunting in New Zealand.

For those wanting to use the boat ramp at the North Rakaia Huts for heading out game bird hunting.

It's currently closed until the 27th of June due to upgrades on the ramp, so you should get an opportunity to hunt down for the last month of the season once it's reopened.

Throughout the season we will no doubt get some bluebird still days and while this weather is not ideal for hunting ducks, it is a great opportunity to have a go at hunting quail in our riverbeds.

Quail don't particularly like the cold so they will get out of the bush and stand on the stones once the sun is out to warm up.

So there is no real need to be hunting them first and last light and if you get stuck for any ideas on how to cook up your game be sure to grab a copy of our Fish and Game cookbook which is available on our website.

A ranging plan was developed for the 2022 game bird opening weekend to cater to expected Covid-19 absences from rangers.

Five teams were organised for the opening weekend.

This structure worked well and large ponds with multiple maimai were able to be targeted simultaneously.

The larger team structure enabled the team working north of the Waimakariri to inspect over 30 ponds on private and quickly deal with two separate firearms seizures where hunters were hunting without a licence.

A second team started at 5 am to target hunters before they accessed their maimai’s in Te Waihora/Lake Ellesmere from Wolfes Road.

This team then patrolled around the lake, targeting areas where NCFG had been alerted to potential issues; no non-compliance was detected.

This early start was well received by hunters and will be replicated at Embankment Road and the Greenpark huts next season.

A third team targeted areas on the boundary to Christchurch in the Coutts Island and Styx River areas; no non-compliance was detected.

One team was stood down the night before opening due to Covid and other sicknesses affecting the team.

A fifth team targeted private ponds in the Rakaia township area, no non-compliance was detected.

116 licence checks were conducted across the region.

Two teams ranged on Sunday; the first team conducted boat-based ranging of Te Waihora/Lake Ellesmere and again was well received by hunters and will be replicated next season.

The second three-person team conducted a wide-ranging patrol starting in the city with known hunting areas just off the QE2 drive area, then travelling to the Selwyn River area before returning to the office via the Waimakariri River area.

Low numbers of hunters were encountered, but many sites were visited, but the locals certainly noticed Fish & Game’s presence in the area.