North Canterbury Both Barrels May 2019 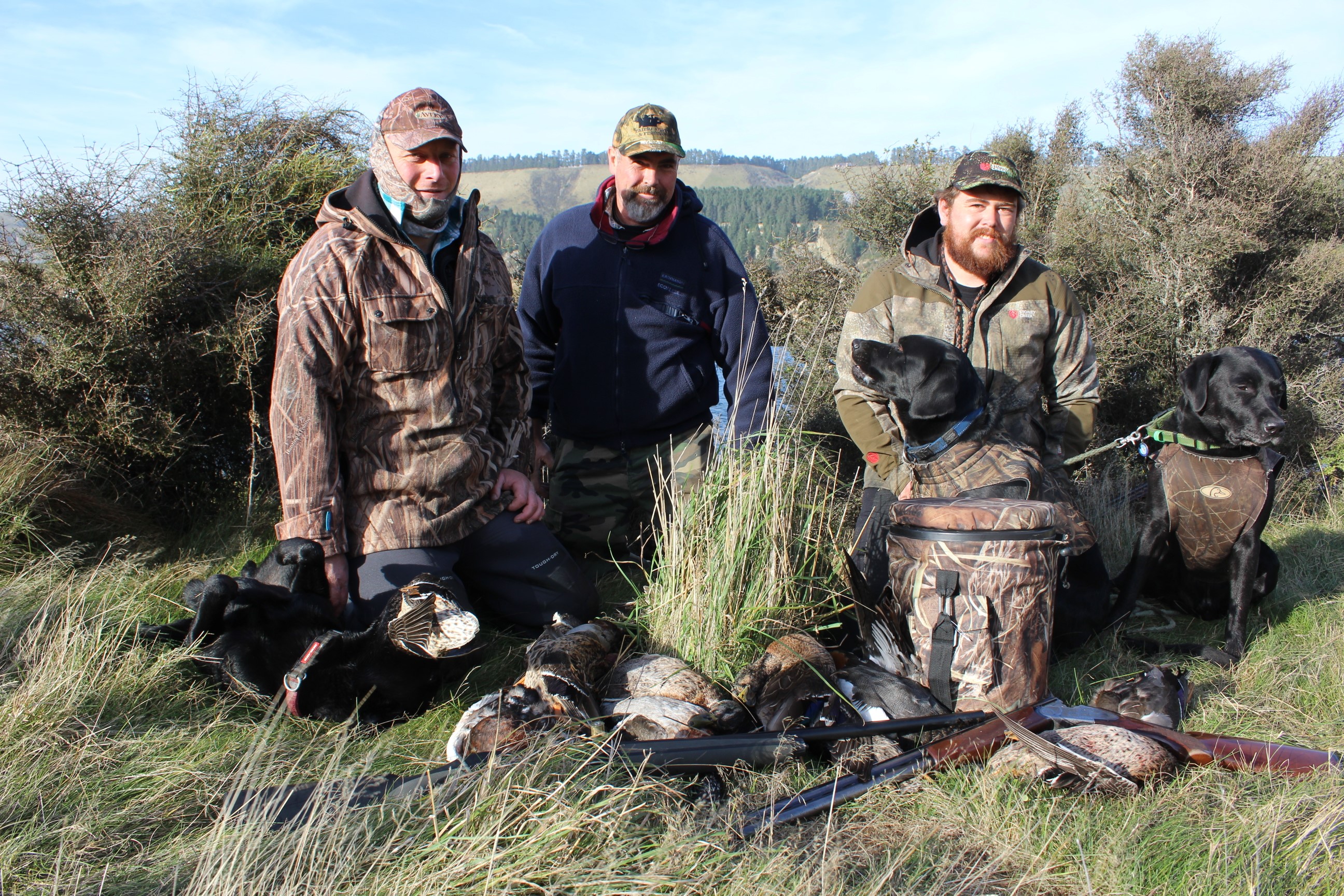 Over night temperatures were mostly above 10 degrees with a moderate nor-west wind inland, and light winds in the coastal band.

Some areas in the north of the region had fog which helped pond hunters especially.

Above Right: Happy inland North Canterbury hunters with 18 ducks for their first shoot of the season.

Hunters were out in large numbers on opening day, and most reported that good numbers of birds were trading in their vicinity, but due to the relatively fine conditions they were difficult to call in after the first two hours.

Established ponds in the region which had been grain fed prior, provided some very good hunting in many cases.

Good numbers of around 30 to 60 birds per pond have been reported by hunters on a number of Canterbury’s many irrigation ponds.

Hunters in these coastal areas all managed to shoot at least a couple of birds in the first hour, and some in the right places had very good tallies, some limiting out with 25 birds.

All commented on the large numbers of birds trading high.

One seasoned hunter was confident in stating that, he had not seen that many birds in the past 20 years.

The first southerly winds were some time coming, and the first one arrived during the night, not ideal but hunters that were out early the next morning did well.

It is important for hunters to forecast ahead and be set up in advance of, ready and waiting for the southerly wind changes.

The initial wind change is often the most productive hunting time in open waters, and the rougher the better.

North Canterbury Fish and Game Rangers were out in large numbers with an extensive compliance operation underway during the day.

From the Ashley river in the North, to the Rakaia River in the south, 22 Honorary and Staff rangers were out covering a wide area.

Fish and Game were expecting a higher than usual amount of compliance phone calls this season, due to the heightened media focus around firearms reform.

Media teams were out, and it was expected that protesters may use the current firearms climate to highlight their cause.

This turned out to, not be the case, but in the event that it was, the North Canterbury compliance team were fully prepared and ready to respond with their usual professionalism.

A social competition was held during the morning at Wolfes Road with prizes given for the heaviest brace of mallards, paradise ducks, and black swan entered.

Rangers were assigned to BBQ duties providing hunters with some well earned sausages.

That was a great plan until the F&G barbeque wouldn’t go!

Plan B was employed thanks to one of the rangers bringing his camper van to the site.

During the course of the day over 150 licences were checked by the team with 100%  compliance -no offences were detected.

On another positive note, no firearms accidents were reported in the North Canterbury region.

The above scenario was exactly what the team had hoped for in the current firearms climate.

Hunters have obviously played a huge part with portraying  “game bird hunters” as a responsible and law abiding group.

Anglers are advised that there has been a misprint regarding the 2020 Summer season on paradise shelduck in Area A.

The limit bag regulations currently state five bird, this is not correct. as Council has endorsed a new limit bag of 15 birds.

Council will honour the new limit bag of 15 birds in Area A during the 2020 summer paradise shelduck season.

Hunters, Don’t miss this one! It is the biggest game bird hunting event in the country!

Yes it is on again hunters! gather in your hunting mates from where ever region they are in, in or out of the country, to celebrate our game, and the traditional harvest of game birds for the table.

The inaugural social event last season held at the Springston Hotel showed huge potential for this event to grow, and it was evident that something like this is a great way to attract young hunters into the sport.

It is up to the hunters to make a success of this event.

If you want to give something back to our magnificent game bird resource, this is the way to do it.

Bring your mates, and bring your kids to the best game bird event in the country, and celebrate the traditional harvest of our magnificent game bird resource.

There have been a few small changes to the event this season listed below.

There have been a few changes to the competition this season, but one thing has not changed, there is still about $9,000 worth of prizes in the pool.

Thanks to Hunting & Fishing Tower Junction, the North Canterbury Fish and Game Council, with support from the Christchurch Airport Authority.

Fish and Game Rangers will be asking Pheasant hunters to assist with a pheasant population survey this season.

Sightings of hens and cocks by hunters over the two day season will be collected to form an annual trend count of populations.

Rangers will require your phone numbers in order to call you back after the weekends hunting.

The ultimate objective will be the protection and enhancement if possible of this truly magnificent game bird.

Your assistance would be much appreciated.