North Canterbury Both Barrels May 2018 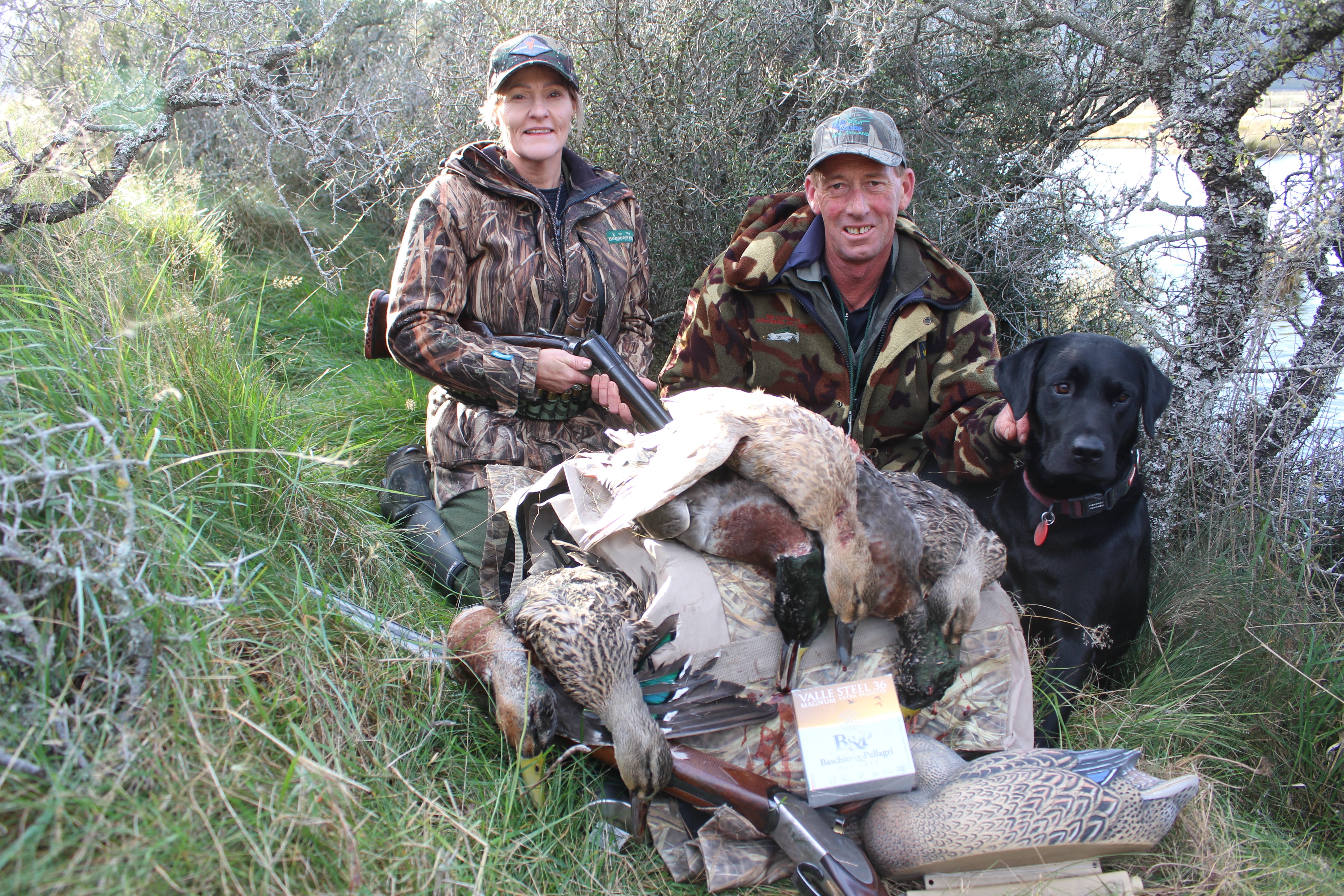 Weather conditions were mixed around the region with little wind in the lowland areas and strong North West winds inland.

Thick fog was also present in the mid reaches of the catchment. Hunters were out in force in the region with very mixed results.

Above Right: Half a dozen ducks from a quality morning shoot on the Rakaia.

Open water bodies such as Lake Ellesmere proved to be difficult for hunters with birds trading very high from first light in many cases.

Most hunters managed to shoot one or two birds in the first hour, although there were some whom seemed to be in the right spots, and shot very good numbers of birds despite the calm coastal weather.

Some mai mai teams had around 25 to 60 birds in the bag, and good numbers of high birds were also evident.

They will provide good hunting in the region when the first Southerly winds of the season arrive.

Established ponds that had been grain fed provided some very good hunting in many cases.

Most of these ponds were on the mid land band areas between the coast and the foot hills.

Good numbers of around 30 to 70 birds per pond have been reported by hunters on a number of Canterbury’s many irrigation ponds.

However some hunters met by rangers on irrigation ponds had shot very few also.

This may be due to the fact that there are so many of these ponds in the region now, that there simply can't be birds on all of them.

Twenty one honorary and staff rangers covered a large area with a major focus being made on the Rakaia and Ashley rivers, and the Southern and Northern ends of Lake Ellesmere.

A social competition was also held during the morning at Wolfes Road with prizes given for the heaviest brace of Mallards, Paradise Ducks, and Black Swan entered.

Rangers were assigned to BBQ duties providing hunters with some well earned sausages.

Other hunting related prizes were also given to another three hunters in the way of lucky licence draws.

During the course of the day 160 licences were checked by Rangers, with a mostly positive level of compliance, except for one group of young hunters.

Rangers inspected a mai mai in the Ashley river area and immediately detected the use of lead shot being used by four of the seven hunters present.

Further questioning revealed that three of the four whom were using lead shot also did not have current game bird licences.

Offence notices were issued to all four, and their firearms were confiscated.

In summing up the opening weekend of the 2018 game bird season in North Canterbury would be regarded as a real success.

Rangers met up with a lot of happy hunters, all in chatty moods and full of excitement for the season prospects ahead.

Hunters understand that the weather can play a big part on hunting success at the big open water areas in the region, but many will take that option anyway despite calm conditions, as they are connected to their favourite places.

Even though calm in the lowland band, many hunters harvested very respectable bags of mallards by being positioned on the  flight paths, on the same big open waters.

Pond hunters whom had put the work in with feeding and concealment, were in general very successful with great bags of ducks.

One thing is for sure already, roast wild duck is back on the menu for most Canterbury hunters this season.

On another positive note, no firearms accidents were reported in the North Canterbury region.

Lead shot alert to all hunters!

There have been reports of Rural Outlet Stores advertising specials on lead shot, with all the other duck type kit, camo nets, and decoys displayed on one promo stand, this season.

On most occasions there is no identification on the ammunition boxes that states “Lead Shot” If you see any of this misleading advertising can you please contact North Canterbury Fish and Game.

Although this practice maybe morally wrong, it is the hunters responsibility to make sure they are hunting within the regional game bird hunting regulations.

Past efforts to talk to retailers about this issue have been met by a lack of interest.

In one case last season a retail manager showed a, no care factor at all, when advised that some of their customers may have been unwittingly sold illegal ammunitionfor the intended use, and as a consequence have had their guns confiscated.

Fish & Game will be making further efforts to discourage this practice in the future.

Fish and Game Rangers will be asking Pheasant hunters to assist with a pheasant population survey whilst in the field this season.

Sightings of Hens and Cocks by hunters over the two day season will be collected to form an annual trend count of populations.

The ultimate objective will be the protection and enhancement if possible of this truly magnificent game bird.

Your assistance would be much appreciated.

Remember for the first time this year we have the Canterbury Wild Duck Hunters Competition click here for all you need to know.