North Canterbury Both Barrels May 2017

The Game bird season is now approaching the end of its first month and North Canterbury hunters are still very active according to reports from Fish and Game field staff and rangers.

Any prospect of a Southerly weather forecast has hunters heading for their favourite spots, in particular the larger water bodies such as Lake Ellesmere, in the hope of rain and strong winds.

Above Right: Trent Lassen from Selwyn heads back after a successful morning hunting.

For those without an interest in Game bird hunting this hardy crew could be regarded as crazy to be actually enjoying natures weather at its worst, and freezing their butts off for fun.

For those reading this, we know that’s just not true, what could be better than this? Such is the passion for duck hunting!

Although there have been a few weather occasions that have provided some favourable conditions for duck hunting, unfortunately the most adverse of the fronts, have arrived after dark and have backed off by the morning.

Unmentionable cursing comments will have been common at the family dinner table this season I suggest.

Despite this there has still been some great duck hunting for some hunters during the, not bad but could be better, hunting conditions.

Reports of reasonable bags of up to 15 mallards came in from Ellesmere during the third week of the season, and most others also managed to bag a duck or two.

From the couple of hunting chances I have had it seemed that hunters venturing out further in the lake, compared to those on the margins, were certainly getting more action.

The ducks are quick to learn that the most danger comes from the immediate lake margins, so they simply trade further out.

For those hunters who go to the extra effort of walking long distances, lugging good decoy layouts, the reward can be very worth while.

Most hunters are reporting that there are more ducks around this season, especially mallards.

This was evident from opening day, which despite the calm conditions, resulted in good bags of ducks for many.

This should ensure that there is better opportunity for hunters this season than there has been over the last few, and prospects should be good throughout the season duration.

Take advantage of any adverse weather conditions, and go a bit further if you can, and your chances of a good hunt and roast duck will be better.

On a very pleasing note, no hunting accidents have been reported this season.

This is great but there is never a time to be complacent. Always keep in mind the 7 basic firearms safety rules, Keep it safe out there guys!

Fish and Game Rangers and Staff manned the BBQ cooking sossy’s for the hunters at Wolfes Road, Lake Ellesmere again this season.

The focus of this event is simply about celebrating the historical “ Opening Day of the Duck Hunting Season” It is a great opportunity for hunters and rangers to meet up in a social environment and generally just have a catch up about the mornings hunt.

Fish and Game also use the location as a meeting point for the Ranging team whom are out in all directions from there.

The social competition is low key but just adds another social focus to the morning, and there was again some pretty good hunting gear to give away.

Prizes were on offer for the Heaviest Black Swan, and the Heaviest brace ( male and female ) of Mallards and Paradise ducks.

There were also 3 lucky licence draws just for being there.

Unusually this year, no one entered the Black swan section or the Mallard section.

These prizes were then allocated to the Paradise Shelduck section.

Leah Manson was the overall winner of this section, and great prizes for 2nd and 3rd and 3 lucky draw prizes were also on the day.

North Canterbury Fish and Game Rangers were out in large numbers with an extensive compliance operation planned. 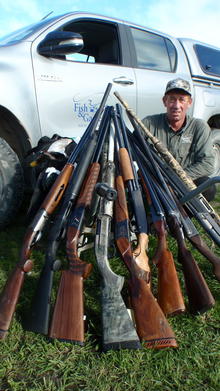 23 Honorary and staff Rangers covered a wide area from Waiau River in the far Nnorth of the region to the Rakaia River in the south.

A major focus was targeted around the Culverden area due to a number of offences being detected during the past 2016 opening day.

The eastern shores of Lake Ellesmere were also targeted and a number of predetermined private pond locations were also on the list.

The hub of all compliance activities were based at Wolfes Road, Lake Ellesmere.

During the course of the day around 140 licences were checked by the team with a positive level of compliance the southern part of the region.

No FTPs or Offences were detected by Rangers in the south.

However the northern area, (Waiau/Culverden) proved to be a problem one with our northern most teams of Rangers detecting 11 offences.

The use of lead shot being used illegally was detected in eight cases, and there were three No Licence Offences.

In all of these cases firearms were confiscated, three Failure to Produce a Licence Notices were also issued in that area.

One more offence notice was issued on Sunday for using lead over open water.

Very costly mistakes for the sake of thinking their chances of getting caught are remote.

Lets hope that the publication of these offences will spread the word, that it is not worth the risk of being caught!

Fish and Game staff are disappointed with the lack of compliance by hunters in this area and are already planning heavily increased activity in the northern part of the region.

Sponsored by, Hunting and Fishing Tower Junction, Rangiora. Supported by the CHCH Airport Authority and the North Canterbury Fish and Game Council.

The intentions of this competition are to provide hunters with an additional focus during the Gamebird season, encourage them to harvest black swan as a food source, and to address crop predation issues caused by increasing population numbers. 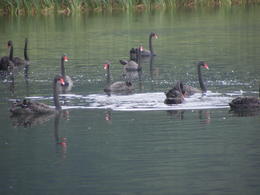 The competition is confined to the North Canterbury Fish and Game Region only, To enter the competition hunters need to present pairs of Black Swan legs tied together and frozen separately.

There is no limit to the number of entries per hunter, but hunters may only enter 1 section.

A current 2017 Game bird hunting licence must be produced, and all Black Swans shot must be in accordance with current Fish and Game hunting regulations.

Entries will not be accepted from birds shot under special Game bird control permits issued.

Although the prize draw is not finalised yet the basic format will be in 3 categories, and in lucky draw format per section.

Legs will only be accepted during a 4 day period during the last week of the Area A Black Swan hunting season starting Monday 18th September ( 8.30 am – 5pm daily ) and finishing Thursday 21st September.

Hunters are invited to attend a closing day social BBQ and prize draw at the Coes Ford/Selwyn River picnic area, Ellesmere, from 10am Sunday 24th September.

The prize giving will start at 11am sharp. Hunters must be present, and they must be able to produce both a current Firearms Licence and a 2017 Game bird Hunting Licence at the prize giving. 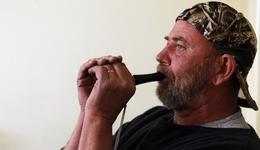 Fancy yourself as a bit of a duck whisperer? think you are pretty good on the old duck caller?

If so come along to the Springston hotel on the 22nd of July and put your name down to compete in the North Canterbury Duck Calling Championship.

You'll be expected to run through a routine of calling lasting 60 seconds and depending on the calibre of your competition you could be walking away with some fantastic prizes from the sponsors: First Lite technical hunting apparel, Falcon Ammunition,Ironman 4X4 and North Canterbury Fish & Game