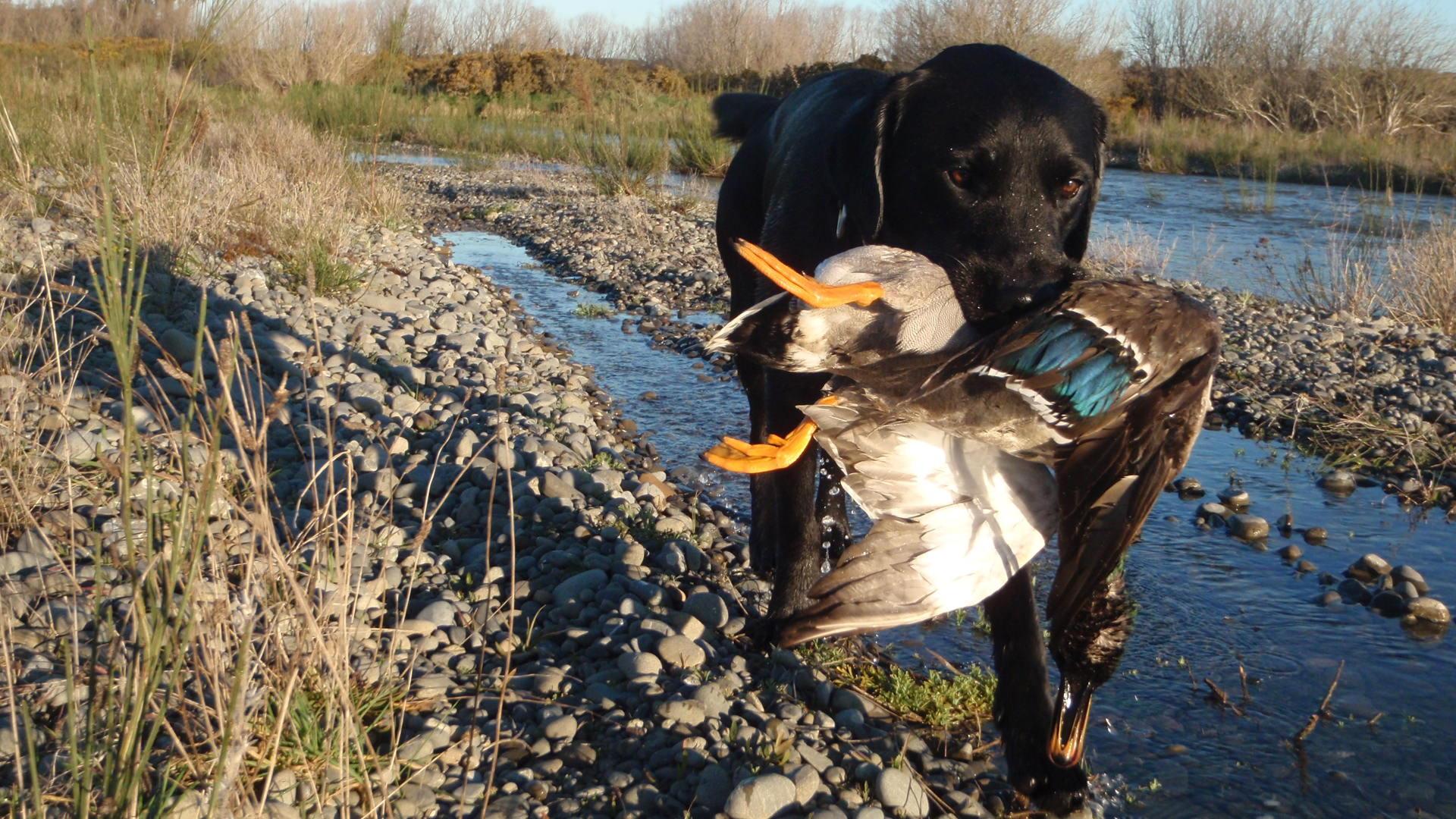 It’s hard to believe we are now approaching the final weekend of the duck shooting season.

Most hunters will be hoping for a couple of last chances and as this week progresses the weather forecast may just provide some good opportunities on Thursday and Friday.

Above Right: Brace brings in a nice mallard.

In addition to this, the last day of the season ( Sunday 30th July ) often encourages large numbers of hunters out for a last shot of the season.

This can be to everyone's advantage as more birds are disturbed from more areas, providing more chances.

We encourage as many of you as possible to get out there, for at least for one more go before the seasons over!

It would be fair to say that this season has been better than the past few for most hunters.

There are definately more birds than usual on the wing, especially around Ellesmere, on dusk this season.

Increased regular hunting pressure at the common access points has also been noticeable this season.

Frequent favourable weather events have also provided good conditions and as a result of this Mallards have been shot more consistently by new hunters this season which is great to see.

At present there is a lot of surface water around, this will mean that Mallards will have plenty of new feed options available to them.

Mallards love worms and there is no doubt that they will be feeding on flooded paddocks in search of them.

It may be worth going for a drive and scouting out some birds and then knocking on some doors and asking for permission. You might get a few no’s! but it only takes one yes!

There will also be opportunities around pools left behind by the floods in our low land riverbed catchments, as these flows drop it maybe worth a look for birds camped up along the willow margins of rivers like the Selwyn and Ashley.

As the duck season comes to an end don’t forget there are still hunting opportunities available.

Jarrad Melhopt, organiser of this annual  event in Springston made the wise call to postpone the event after the storm that hit Canterbury and Otago made road travel difficult and dangerous.

The event had received widespread publicity after Fish & Game posted a funny video of competitor Callum McKenzie using duck calls to communicate with his workmates on the building site was watched by 25,000 people.

As well as an adult section for the first time in Canterbury a junior section is being held,  three brave young duck callers are entered in it, but with the postponement there's a chance for other youngsters to enter and also the chance to walk away with some fantastic prizes.

Although the prize draw is not finalised yet the basic format will be in three categories, and in lucky draw format per section. There will be two camo Benelli M2 12 gauge one semi-automatic shot guns in the prize pool. There will be a main prize in each prize pool and other lucky draw prizes will also be added.

The prize-giving will start at 11 am sharp, Hunters must be present, and they must be able to produce both a current Firearms Licence and 2017 Game bird Hunting Licence.

Finally, good luck to all during the last week of the main duck hunting season, personally I've had a mixed season.

I have shot very poorly at times, and very well also, but the main thing is, I've really enjoyed every opportunity taken, to get out and take part in this truly amazing sport of game bird hunting that we are so lucky to have.

The only thing I’m not looking forward to is trying to explain to my young lab Brace, after in his first year in the field, that we are done for now and will have to wait awhile until the 2018 duck hunting season!