Unfortunately, our main salmon fishing rivers have not been kind to us this month, as they haven’t quite cleared up enough for suitable fishing conditions. Leading up to February the salmon fishing has been encouraging with plenty of reports of great conditioned fish being caught, the average fish weighing between 15 to 20lb. This is great to see so far and once the rivers clear up, let’s hope it continues. Once the rivers are fishable the salmon should be much more spread throughout the river, meaning anglers may need to cover more ground to find where the fish are. Be sure to keep a close eye on the Waimakariri river as the fishing usually starts to pick up from the end of February onwards. If you are wanting to explore a little further north, the Hurunui and Waiau rivers are a great alternative as they also hold some decent size salmon. Remember where the upper salmon fishing limits are located, as it is especially important we let the fish return to their spawning waters. This in turn can mean better fish returns to these rivers in the future.

As you may have noticed, the cicadas have started up so now is also a great time of year to get out fly fishing for trout. Cicadas are a great food source for trout and they will sometimes make the effort to come up from the bottom of deep pools and take cicada patterns off the surface, as well as other large terrestrial flies. 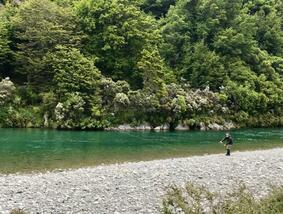 As anglers will be aware, this is the second season where you are required to have a back country endorsement to fish four of our rivers in the North Canterbury region. These include the Hurunui River above Lake Sumner, Hurunui South Branch upstream of Esk River confluence, Hope River upstream of Boyle River confluence, and the Waiau River upstream of Hope River confluence. Anglers can get this endorsement on the Fish and Game website after they've purchased their full season license. By having this endorsement it gives us a good indication of how many anglers are fishing these back country rivers, which helps us to protect and maintain the angling experiences. These rivers offer some fantastic and challenging fishing opportunities to catching that trophy trout in gin-clear water. But remember, these fish don't get big by being dumb, so if you spot a fish you’ll need to proceed very carefully and get your cast perfect!

Click here for more information about our back country rivers

Some of our staff members, alongside staff from Central South Island Fish & Game, have once again been involved in the Hapua (river estuary) surveys that are part of a joint study with Environment Canterbury and DOC. Over the 2021/2022 Summer period, the Rakaia Hapua has been the focus of this study.

There are 2 species of native Smelt, Common and Stokell’s, and both are an important part of the Hapua ecosystem as they constitute a large part of the available food source for other species, including sea run trout and salmon. Anglers have noted a decline in smelt numbers over the years which could give an indication to the smaller numbers of sea run trout being caught in the area in recent times. These surveys therefore look to identify if the native Stokell’s Smelt is still present in the Hapua and give an indication to the abundance of both Smelt and other fish species. 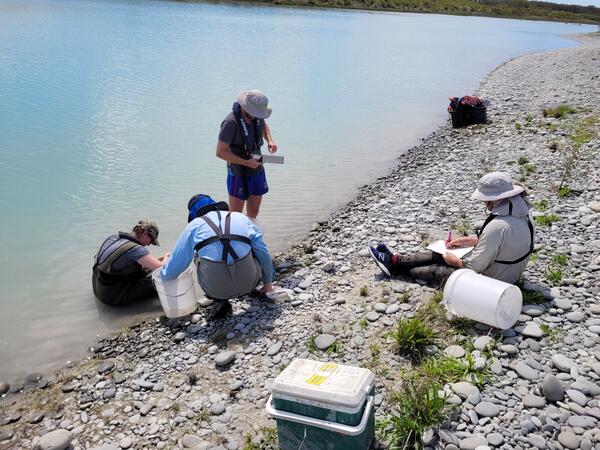 Identifying and measuring fish caught in the seine net

During the last survey, 13 sites around the Rakaia Hapua were sampled using Seine nets. Fish were placed into buckets and individually identified, measured, and released back into the water. Smelt constituted the largest proportion of samples, but we also found Yellow-eyed Mullet, Black Flounder, Inanga, Brown Trout, Salmon, and Torrentfish. As it is difficult to differentiate Stokell’s Smelt from Common Smelt, it is unclear whether any Stokell’s Smelt were caught, however a few samples were taken by ECan for genetic testing.

Studies like these are important to us as they can help us better our understanding of the current state of river ecosystems and identify some of the contributing factors to changes in sea run trout and salmon numbers. There are still a few more surveys left to do this season, and once these are finished, we look forward to reading the final report from ECan & DOC.