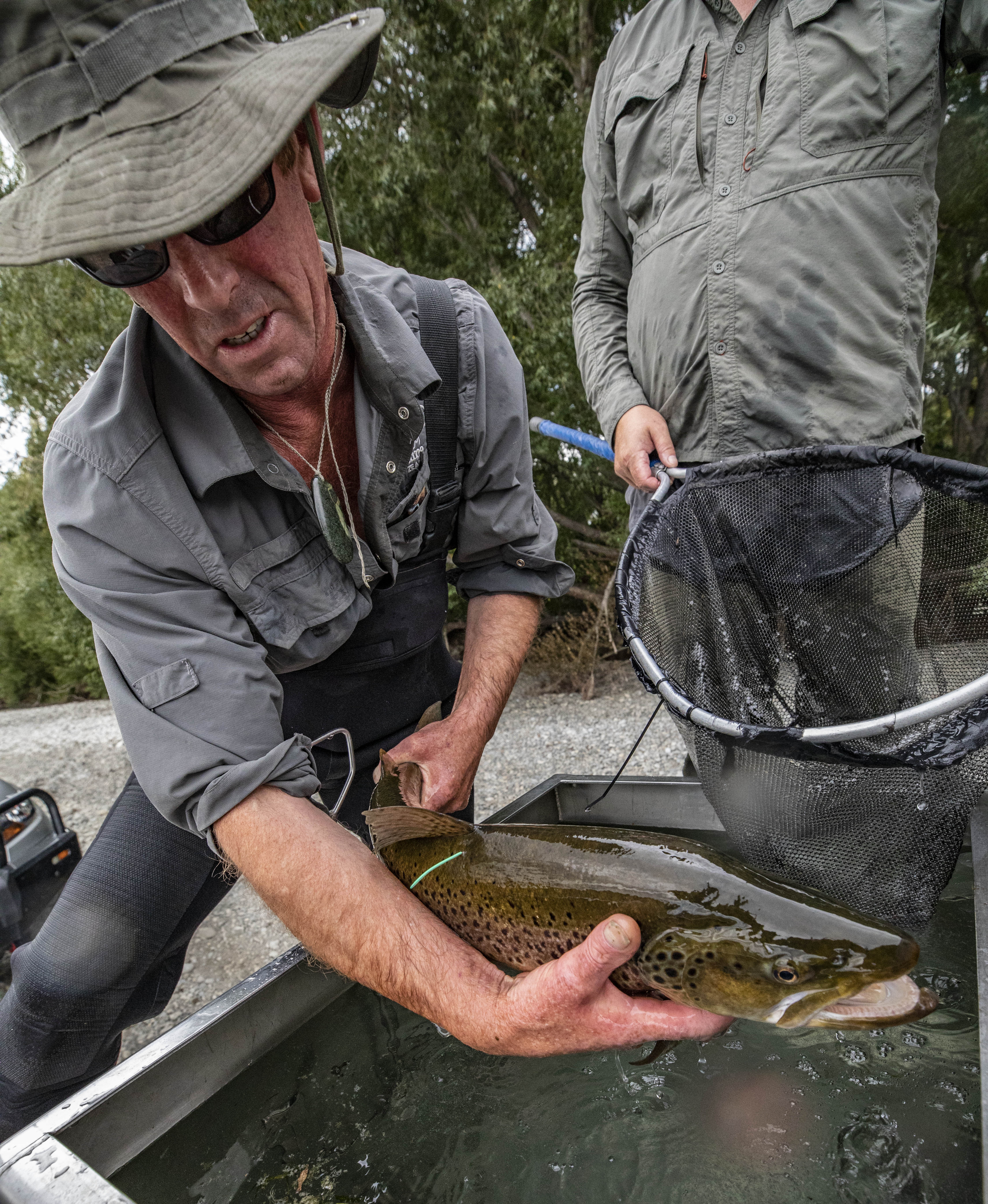 There are many positives for the anglers who target March on their fishing calendar.

Often (not always) the weather system over New Zealand is more stable during this month.

Rivers that carry snow melt before Christmas have well and truly settled down.

Right: A tagged brown trout rescued from the Ashley River, more info below.

Back country rivers are usual stable, low and easier to negotiate.

Trout in the back country are in amazing condition this year due to extra protein diet offered by high mouse numbers in beech forest clad catchments.

While some of the lager terrestrial insects such as cicadas or beetles may be slightly less numerous, March is a good time to use traditional mayfly imitations and more subtle patterns.

Remember the trout has seen a lot of flies over the summer period.  Be prepared to use smaller imitations.

For salmon anglers, remember the season ends at the end of March.

There are currently salmon all through the middle reaches of the main alpine rivers.

The Waimakariri salmon run is traditionally a little later than the other rivers.

Salmon tend to hang around the tidal reaches during the month of March.

They have remained full throughout the summer.

The weather has been variable enough that the water temperature has kept cool and trout have had a stress free and productive summer.

In March lakes with brown trout will still have plenty of trout cruising around the edges.

Fishing by boat or spin angling from the shore is best during this time.

Winter regulations for the Hurunui and Waiau

You may have noticed that the fishing regulations were formatted differently this year.

This was to make regulations around the country more consistent while still allowing a bit of variation between rivers and regions.

During this new formatting the Hurunui and Waiau winter season got omitted from the final version that went to publication.

This was accidental rather than anything intentional.

To rectify this Fish & Game applied to the Minister of Conservation for an amended to the Anglers Notice.

This was granted in February.  Over the next few issues of Reel Life we will remind anglers of this amendment as we cannot change the published regulation booklets.

So, in addition to your regulation booklets please also note that the Hurunui and Waiau Rivers will have winter seasons.

For the Hurunui it is downstream of the South Branch confluence only.  Use of artificial fly or spinner. From May 1st to September 30th.  Is only applicable to trout but all fish must be released.

The Waiau has the same rules and applies downstream of the Hope confluence.

This presents keen anglers with an opportunity to fish for trout and release them again.

Some anglers may have missed the media stories about the closure of North Canterbury Fish and Game hatcheries, it is copied below for those that may not have seen it:

The decision to end sea-run salmon hatchery operations is based on reviews of scientific studies and expert assessments commissioned by Fish & Game which demonstrate that hatchery releases in North Canterbury have likely negatively impacted the regions wild sea-run salmon fishery.

The decision recognises that protecting wild locally adapted salmon and trout populations, and the habitats they depend on, is essential to ensuring the long-term resilience and sustainably of the New Zealand angling resources and opportunities.

It is now understood that large scale releases of hatchery reared salmon smolt have likely been a major contributing factor in the current weakening of North Canterbury’s wild sea run salmon fishery.

The council came to this decision after having undertaken a review of historical hatchery practices in the region, the economic strain and budget overruns cause by these hatchery operations, along with an internal assessment of hatchery practices and external scientific advice on the adverse impacts hatchery releases can have on wild salmon populations.

This end of sea-run salmon smolt releases by the North Canterbury Fish & Game Council is part of their renewed determination to focus on managing and restoring the regions wild sea-run salmon populations. This decision was based on the best available scientific knowledge and ecological guidelines for how to manage and restore wild salmon populations.

Research by retired NIWA scientist Martin Unwin showed that wild salmon populations in New Zealand have evolved local adaptions, which create a "home court advantage" that results in both genetic and behavioural differences which are inherited by their offspring.

As a consequence, releasing hatchery reared salmon can be detrimental to the wild locally adapted salmon population.

The Fish & Game hatchery sites at Montrose and Whiskey Creek have now been closed and made safe.

North Canterbury Fish & Game Council will retain and aim to further develop one sports fish hatchery operation at the Issacs facility in Christchurch.

Current hatchery stocks have been released where they won’t negatively impact the wild fishery - Lake Coleridge for salmon, and in some smaller high-country lakes for brown and rainbow trout.

To achieve this the Council are actively seeking to form partnerships and attract sponsors. An approach that is already being successfully applied in other Fish & Game regions like Otago and Nelson/Marlborough.

Once modified the Issacs hatchery operation will also ensure North Canterbury Fish & Game are able to also raise trout or salmon for releases associated with monitoring and research purposes.

Anglers can help by limiting their harvest of wild (non-fin clipped) salmon to four fish per season, and also assist Fish & Game in our Rakaia research project by providing information and otolith samples from any salmon harvested.

The otolith (earbone) of salmon enables fishery managers to see the life history of the fish and will help Fish & Game identify parts of the river system that may require extra habitat rehabilitation and protection work.

Often at this time of year Fish & Game staff are salvaging fish from the Ashley River as it dries up.

Staff last week rescued over 200 fish from a couple of disconnected pools near Rangiora.

To learn more about what happens to these fish after we release them where there are more stable river flows, we have tagged a number of them like the ones pictured above.

If you catch a tagged trout in the Ashley River, please let us know it's number, when and where you caught it and what condition it is in.

You can contact the North Canterbury Office on 03-3669191 or via email on northcanterbury@fishandgame.org.nz

The Team at North Canterbury Fish and Game.