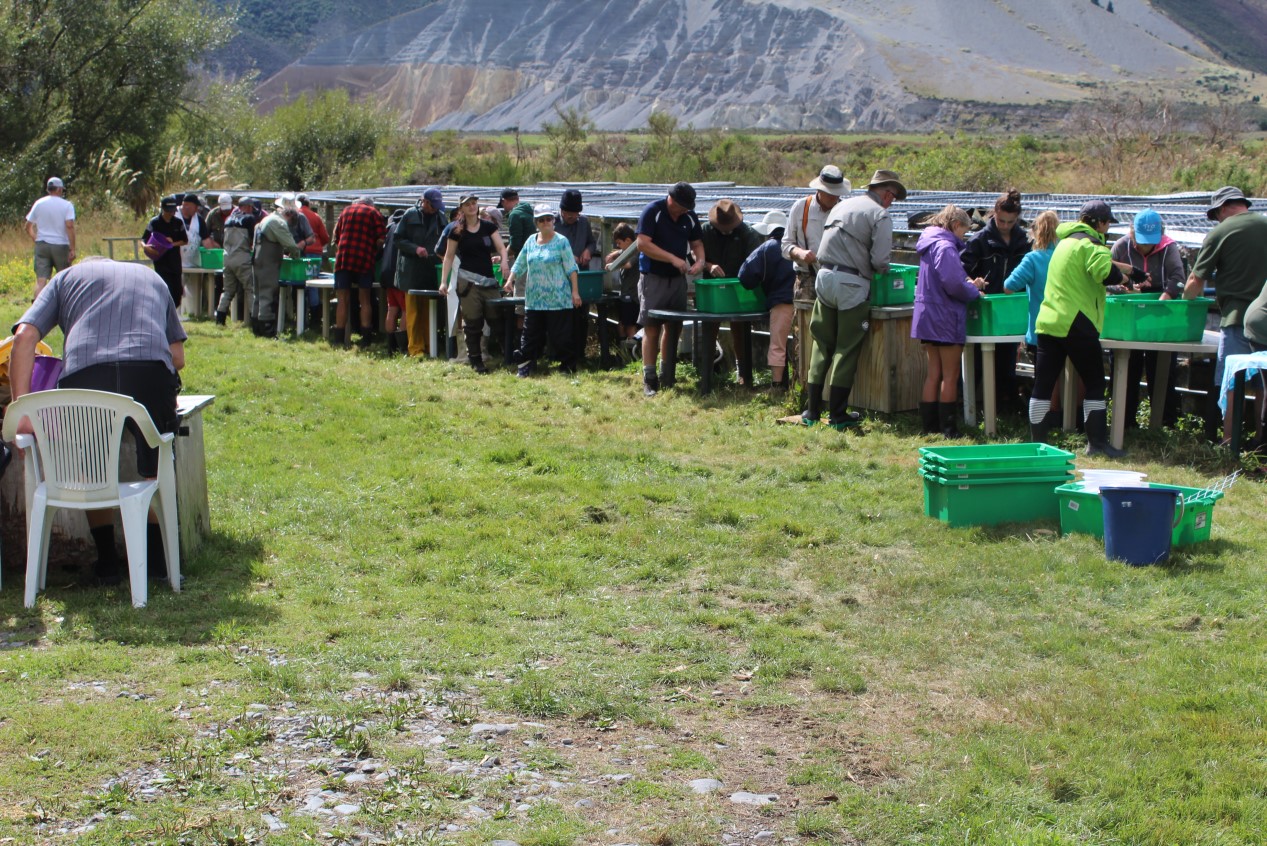 Volunteers clip salmon by the thousand

Volunteers really stepped up to the mark over a weekend for the annual task of marking all remaining enhancement programme stocks.

Around 130 volunteers turned up to remove the adipose fin for identification and monitoring purposes.

During the course of the weekend 180,000 salmon smolt were fin clipped.

There has never been so many clipped in one weekend.

This was largely due to having two consistent days with good numbers of volunteers present.

The diverse range of volunteers, from hard working 90 year-olds to little four year-old runners bucketing fish to the clippers, was amazing to see.

Families with kids gained real hands on experiences and had a great time at a pretty special place.

The Salmon and Trout Enhancement sites at Montrose, Isaacs, and more recently Whisky Creek and Bully Creek, were all created by angler volunteers, mostly from the NZSAA.

The countless hours that have been put in by so many over the decades is simply incredible.

Fish & Game would just like to say a big thank you to all involved for an outstanding effort over the weekend, and their unstinting dedication to our fishery.

Don't forget that the Lake Lyndon Family fishing day is on Sunday March 4.

The event was postponed in December due to the biosecurity scare in the Waimakariri Lakes.

With the all-clear being given, the event is all go for the 4th.

Whether or not you're a climate change believer or denier, everyone would agree that this summer has had its fair share of strange weather.

So what's it meant to our fishery? The most obvious effect this year was on our high country lakes.

It started in November when we had an entire month of calm hot weather.

At first the trout did very well in the conditions as the insect life took off and fish put on condition very quickly.

Rainbows of up to 6lbs were not unusual.

Then we had the strange rashes that appeared which triggered a biosecurity scare.

It's now thought that the rash was a result of stress put on the fish by the extreme conditions in the lakes, which were getting up to 25oC.

Some windier weather since then has helped to mix the water in these lakes and cool the overall water temperature.

However, the overall effect on the lakes' fishery is yet to be determined.

As well as high temperatures we have also been battered by ex-tropical cyclones.

This has created regular freshes and floods since Christmas.

The effects of these on the fishery can be more complex, depending on the timing.

On many of our foothill and lowland streams the flushing flows have helped keep good flows providing liveable habitat right through the summer months.

It’s the intensity of some of these storms that can cause fish mortality.

There has also been some incredibly settled weather this year.

It's meant lots of angler days especially in the high country, and some great fishing for fly fishers.

The size of back country trout seems to be down a little this year but the numbers seem to be around average.

March is usually when the salmon fishing really starts to take off in the Waimakariri.

The other rivers have also had a slow start.

After former Cyclone Gita most of the rivers won’t be salmon fishable until March.

Hopefully the cooler temperatures and receding freshes will bring on a good salmon run for the last couple of months of the season.

It can be a very productive month for fly anglers as there is plenty of insect activity around.

The lakes should fish well with some cooler temperatures.