Holiday season on the lakes

Canterbury is blessed with a number of high-country lakes, ranging in size from the large Coleridge and Sumner to more intimate lakes such as Grasmere and Georgina.

The Waimakariri lakes offer a good variety of smaller fishing experiences and also offer some basic camping at Lyndon, Pearson and Grasmere.

The Coleridge lakes offer some camping run by Trustpower on the Harper diversion.

Above: Hamish McDonald landed this lovely 1.8 kg brown trout within ten minutes of arriving in the early hours at Lake Georgina.

The Hurunui lakes have some very picturesque campsites run by Department of Conservation on Lake Taylor and Loch Katrine.

All these camping opportunities present great opportunities for family groups and young children to get involved with trout fishing.

The weather is starting to warm up at this time of year meaning trout usually go deep during the day.

Fishing at either end of the day is the most productive time.

Camping right at the lakes presents an opportunity to fish at these prime times while not venturing far from the camp.

If you plan on boating these holiday season Coleridge or Lyndon present the most accessible boatable fisheries.

Trolling is permitted at Lake Taylor which is a two hour drive from Christchurch on a good gravel road.

Lake Sumner provides some more adventurous boating options but the track to get there is for a 4WD vehicle only.

Boating in Sumner requires launching at Loch Katrine and then going through the cutting.

While there are not huge numbers of salmon around so far this year, there are some nice quality fish being caught.

All the rivers have had salmon caught recently.

Including salmon being caught most days on the lower Waimakariri which is early.

The rivers have been in great condition for salmon fishing due to small nor’ westers putting just enough rain in the headwaters to keep some colour in the rivers.

The weather is expected to settle after Christmas so the main salmon rivers will get clearer.

When this happens the lower Waimakariri is still a great option due to the extensive tidal reaches that go up as far as the Old Highway Bridge.

Salmon spend weeks going back and forth in this area before running the river.

For the other rivers fishing at the mouth or surf can be a good option when the rivers get too low and clear.

December is the month of the Green Beetle 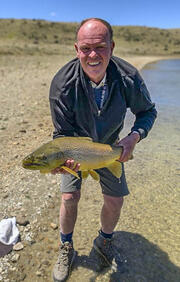 The Green Beetle (Manuka Chafer) can swarm in huge numbers in the back country on warm days.

They are often called the Manuka Beetle as they feed on Manuka leaves.

The Māori name is Kerewai, meaning “to drift on water”.

The naming is apt as they are often seen accumulating on high country lakes in huge numbers.

They can be so thick on the water that the trout will often just cruise along the surface with its mouth open.

In this case it is not so much a problem of matching the hatch but rather putting your fly in the oncoming path of the gaping mouth!

It is not only lakes but back country rivers that experience these swarms.

They are just not as noticeable on rivers as the current continuously sweeps them downstream.

Beetle imitations work well on rivers though and there are many imitations out there.

Some of them now have the shiny metallic colourings of the natural but the traditional such as the humpy with a bit of green on the belly can be just as effective.

Make sure you have some in your fly box these holidays as they are an important item in the trout larder.