Well it’s been a challenging summer for fishing - if it wasn't the wind it was flooded rivers that upset many plans.

As I write this the rivers are settling and becoming clear and a high is bringing calm weather at the end of the week, so things are looking up.

Above Right: Cary Wesley with a nice salmon caught on his first trip out on the Waimakariri in late February. Over 30 salmon had been caught at Mackintoshs Hole over the previous two weeks.

Although salmon have not been present in decent numbers, yet I'm still confident we'll have some sort of late run.

The Waimakariri doesn’t really start firing up until late February/March on a typical year anyway.

The good news is the salmon rivers have plenty of flow and the water temperature is good this year, so any salmon running the rivers won’t be as stressed as other years.

For trout anglers this time of year brings some of the best fly fishing on offer, with large terrestrial insects such as cicadas making an appearance in the high country.

Trout can be very responsive to big dry flies.

Spin anglers on the other hand will have to use light gear with small lures and concentrate on first and last light to get a reaction from fish.

At least our rivers and lakes have not had much angling pressure this year due to the weather so I'm picking that if you do get a window of opportunity over the next couple of weeks, there will be some very good fishing in places.

This summer North Canterbury Fish & Game staff have been concentrating on fish screens.

Fish screens can either be some sort of mesh screen or can even be a gravel bund. 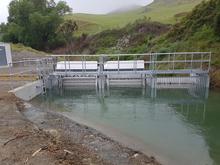 Left: The Selwyn District Council fish screen on a stock water take on the Kowai River.

Their purpose is to keep fish from entering irrigation takes and return fish back to the river.

Unfortunately most of the fish screens in Canterbury were put in place some time ago and have since become outdated in terms of their effectiveness.

However, we have been working with the Selwyn District Council (SDC) recently on screening their stock water takes from various rivers.

The SDC are using the very latest in technology to try and meet the latest standards in fish screening.

Some recent testing of a SDC fish screen shows some promising results.

With some minor adjustments to be made at other sites these screens will be far more effective at excluding fish in small to medium takes.