Welcome back to our regular weekly reporting after the holiday break.

There have been some fantastic catches over the holidays, and it’s great to be able to share three of those with you.

Above Right; Scott Baker with his 32-pound brown trout from the Ōhau B Canal.

If you have a catch report to share, please email a photo and brief story of the catch and tackle used to me for consideration: radams@fishandgame.org.nz.

Scott Baker found himself in need of a taxidermist after catching his wall-hanger brown trout at the Ohau B Canal.

Scott’s successful rig was a black booby fly on a spin rod with an 8lb braid mainline and a 6lb leader.

Our rangers have been active at the canals over the holidays, checking on more than 300 hundred anglers.

Some illegal fishing was encountered, resulting in a handful of offence notices being issued and gear seized.

Rangers report modest catch rates of salmon and trout of all sizes at all canals; perhaps the Tekapo Canal had the highest catch rate of any canal, and night-time was the most productive time to be on the water.

Sockeye salmon have been observed in the Pūkaki Canal, having migrated downstream from Lake Pūkaki through the intake.

Please note:  there is a 300mm minimum size limit for salmon in the canals.

Anglers like Paul Thomson (pictured) have been catching sockeye salmon over the holidays while trolling at Lake Benmore’s Haldon Arm.

January is probably the best month to target sockeye in Benmore as they are at their largest size and in prime condition. In February, they stop feeding and mature for spawning and flesh quality deteriorates.

Local experts recommend targeting sockeye around the Benmore Dam in January and anticipate fish up to 2.5 pounds.

The main trick for sockeye is to get your lure deep, about 4-17 metres.

The best way to do this is with a downrigger, but a lead line with a bunch of colours out does work.

The advantage of a downrigger for sockeye trolling is two-fold.

Firstly, it's easy to manage the depth of your lure, and secondly, you can use a relatively lightweight spin rod which makes catching sockeye more fun as they are relatively small on average compared to trout.

The size limit for salmon in Lake Benmore is 250mm to encourage the targeting and harvest of the ten-of-thousands of sockeye present.

A few dedicated anglers, like Lex Lyons (pictured), have caught a nice sea-run salmon so far this season.

From what I can gather, it has been a season of lots of casts for little catch at the Rangitata River.

One indicator of the Rangitata River’s salmon season is the tally board at the South Rangitata Huts which records all known sea-run salmon catches from the south side mouth and nearby.

As of 1 pm on the 11th of January, there were seven salmon tallied on the board, giving the impression of a slow start to the season for mouth anglers.

North-side mouth and upriver catches are not tallied.

It pays to stay optimistic, though, as we still have the bulk of the sea-run season ahead of us at the Rangitata, Orari and Opihi rivers and the Waitaki River salmon runs usually only kick into gear in February or even March.

Be sure to carry your season bag limit card and a pen when you are targeting sea-run salmon in the CSI and North Canterbury Fish & Game Regions as you are required to immediately record any sea-run salmon kept on your card.

Good news, waterway conditions and weather should be suitable for region-wide fishing this weekend.

Although there are some cloudy periods and isolated showers forecast at times – especially near the main divide – the wind should be light for most of the weekend.

Pack a raincoat just in case and be sure to get out there and enjoy it – and do seek out the latest weather forecast before hitting the water. 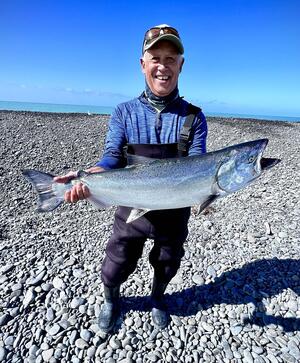 Welcome back to all our readers; we here at North Canterbury Fish and Game hope you had an enjoyable holiday break and got the chance to get some fishing in.

There’s been quite a few sea-run salmon around lately, and we’ve had some great pictures sent to us to share with you all.

Brian Hodges, one of our Honorary Fish & Game Rangers, took Mark’s photo after watching him land the fish. 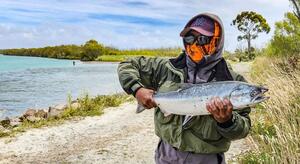 Melvin Arnigo with his first salmon.

Our Rangers appear to be a lucky charm for quite a few anglers; on Tuesday on the Waimakariri River, they saw two salmon of the seven salmon caught, with Melvin Arnigo, left, super stoked about catching his first salmon at Mackintoshes Rocks.

On Wednesday at the Rakaia Mouth, more salmon were landed whilst the Rangers were there.

So much so the Rangers are often getting asked to hang around in the hope that a fish will be caught.

Harry Graham-Samson is leading the tally this season; he’s seen over 10 sea-run salmon caught since Mid-December.

Another of our Rangers, Neil Goldie, helped David Akers from Scotland land his first salmon in NZ on a spey rod.

Neil noted that salmon are all through the river system from the mouth to the gorge, so anglers prepared to buck the crowds and go on a bit of mission should be rewarded.

The big salmon rivers are looking perfect at the moment for some fishing; we’ve been very lucky and spared the effects of all the rain that they’ve been getting further north.

There was a little bit of rain last weekend that muddied up the rivers slightly, as you can see from this image of the Canterbury Plains from the International Space Station as it passed over on Sunday afternoon.

But the rivers have cleared nicely and are looking perfect for fishing this weekend.

We are still finding a few anglers not having their salmon card on them when salmon fishing; it is a requirement to have your card on you so that you can fill it out immediately after you keep a fish.

A common question we get asked is: does the season bag limit apply individually to anglers on a family licence, or does it apply collectively?

The Canterbury Plains from the International Space Station on Sunday

The answer is it is collectively, a family licence only allows for two sea-run salmon to be kept across all people listed on the licence, two in total,  NOT two each.

Little Rakia Boating Club is holding their annual Giant Slalom on February 11 in the lagoon; registration closes on February 3. Do not miss out, as entries are limited to 45 Boats, so if you are keen to take part, contact Graeme on 0275772257.

The 40th anniversary of the Rakaia competition which is the largest freshwater fishing competition in New Zealand, attracting over 700 entrants yearly.

Currently we are only getting pictures of salmon being sent in and we know there’s been some great trout landed in the region, so if you have any recent photos of your fishing exploits or fishing events you want to publicise, send them to northcanterbury@fishandgame.org.nz ; even if they aren’t from our region, I’ll pass them on.