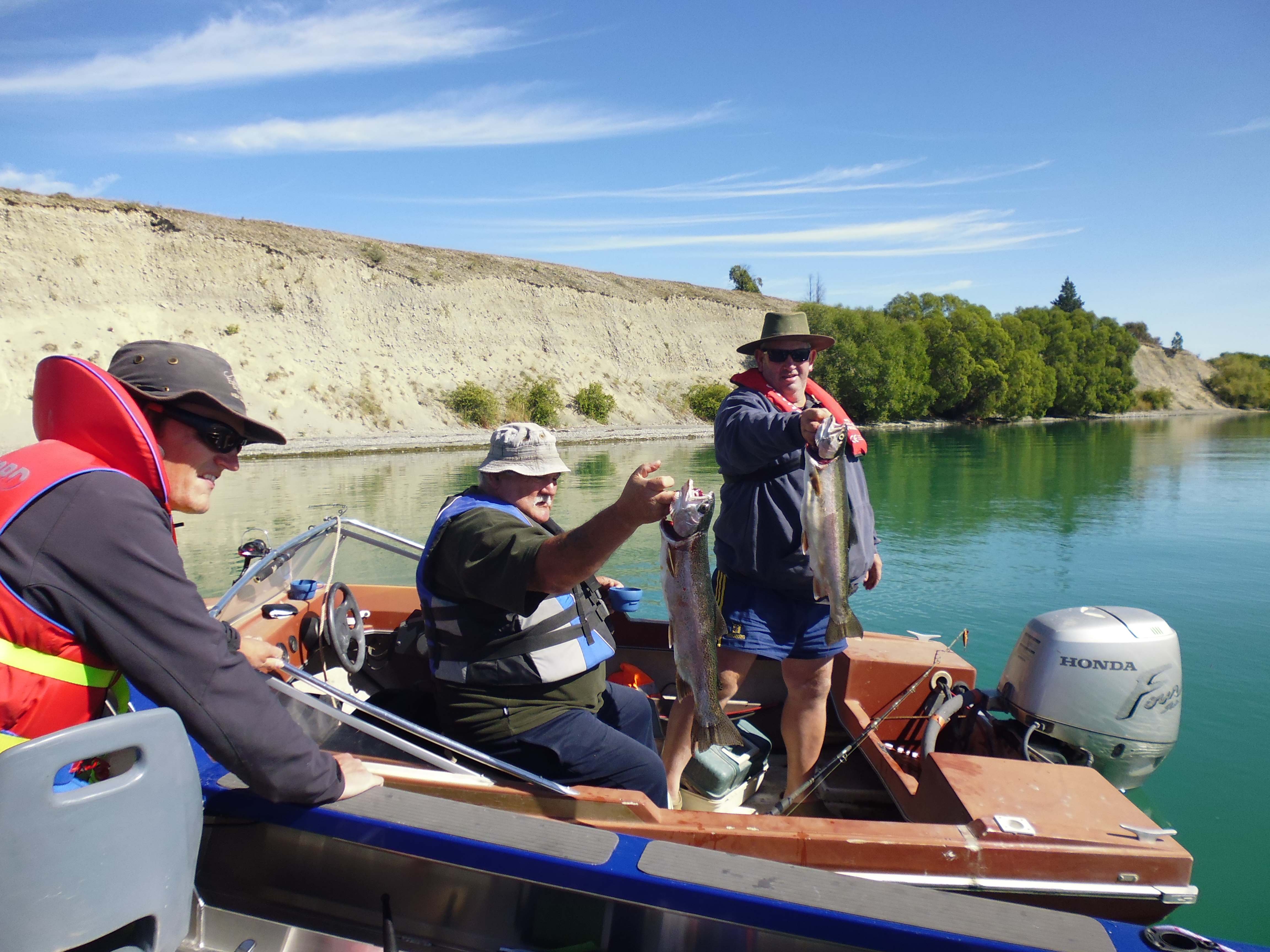 Earlier in the month we received notification form Fulton Hogan that the piers on the railway bridge on the Opihi River were due to be replaced.

The work is expected to continue through the majority of next year.

The site should be well signposted but they ask that you give them a wide berth as they will be using heavy machinery.

The vast majority of the works will be on the dry riverbed so shouldn’t affect downstream angling.

Above RIght: Tony Cherrington and Steve Harrex with a couple of big Lake Benmore rainbows.

We’ll keep you updated with any important news.

Earlier in the week Hamish Stevens and I took out CSI's new boat “Kokanee” up to Lake Benmore on her first ranging mission.

Kokanee is the Native American name for landlocked sockeye salmon so it was fitting to have her out on one of the handful of lakes in the southern hemisphere that houses them.

Despite the beautiful calm day the lake was fairly quiet.

There were a dozen boats and kayaks fishing the Haldon arm and only two on the Ahuriri arm.

A few of the anglers we spoke to said there was a big storm the previous evening, so that might have scared a few off.

We launched the boat at Falstone pretty early, so most of the anglers we spoke to hadn’t had much success by the time we spoke to them, however Tony Cherrington and Steven Harrex had landed two nice rainbows shortly after setting up.

I asked if I could share their secrets with you guys and was surprised when they said yes.

Both these fish were swiftly caught on rapalas, I think it was the bright orange one that did the trick on the larger rainbow.

Definitely worth a try if you're having a hard time up there.

If you’re like me you'll find the price tag on them a bit hard to swallow, but being the hero that brings a nice trout back to the camp for dinner makes it a bit easier.

Round on the Ahuriri arm was a totally different story, the anglers trolling lures weren’t having any luck but the guys fly fishing the flats were having a great time of it.

They reported that the fish were all taking nymphs and seemed to be a bit spooked by the dry’s they were using for indicators.

I couldn’t get a good peek at their flies so it might be a bit of trial and error if I get back there for a fish over Christmas.

Despite seeing relatively few anglers I probably saw more fish cruising than I ever have in a day, if you’ve got a boat there is a lot of amazing fishing available to you on Benmore.

If a boat is still on the Christmas wish list, there’s still heaps of awesome fishing available from the shore.

On the Haldon arm I would try staking the edges around the Ohau C outflow or round the mouth of the Tekapo River, we spotted heaps of fish at both those spots.

Over on the Ahuriri Arm the fish seemed to accumulate anywhere there were shallows, if your keep catching weed while spin fishing you might have to move to the drop-offs, fish with ultralight gear or try a fly behind a bubble float.

Speaking of the Ahuriri Arm, Rhys Adams and I were at the Glenmore Station access last week installing a stile over the fence at the car park.

The spot gives good access to the flats and the lower Ahuriri River, Rhys recently updated the Fish & Game Benmore pamphlet, so track one down if you want more details.

Access is kindly provided by the farmer who sometimes needs to shut the gates at the carpark so please follow all signage and use the stile provided.

Even if the gate is open, feel free to use the stile; we dug through a lot of rocks to put it in!

Enjoy your Christmas, hopefully you get some time off to go fishing.

We'll keep busy checking on anglers on our many rivers, canals and lakes, so make sure you read your regulation book and keep your licence with you when you’re fishing, it’ll save us both some paperwork.