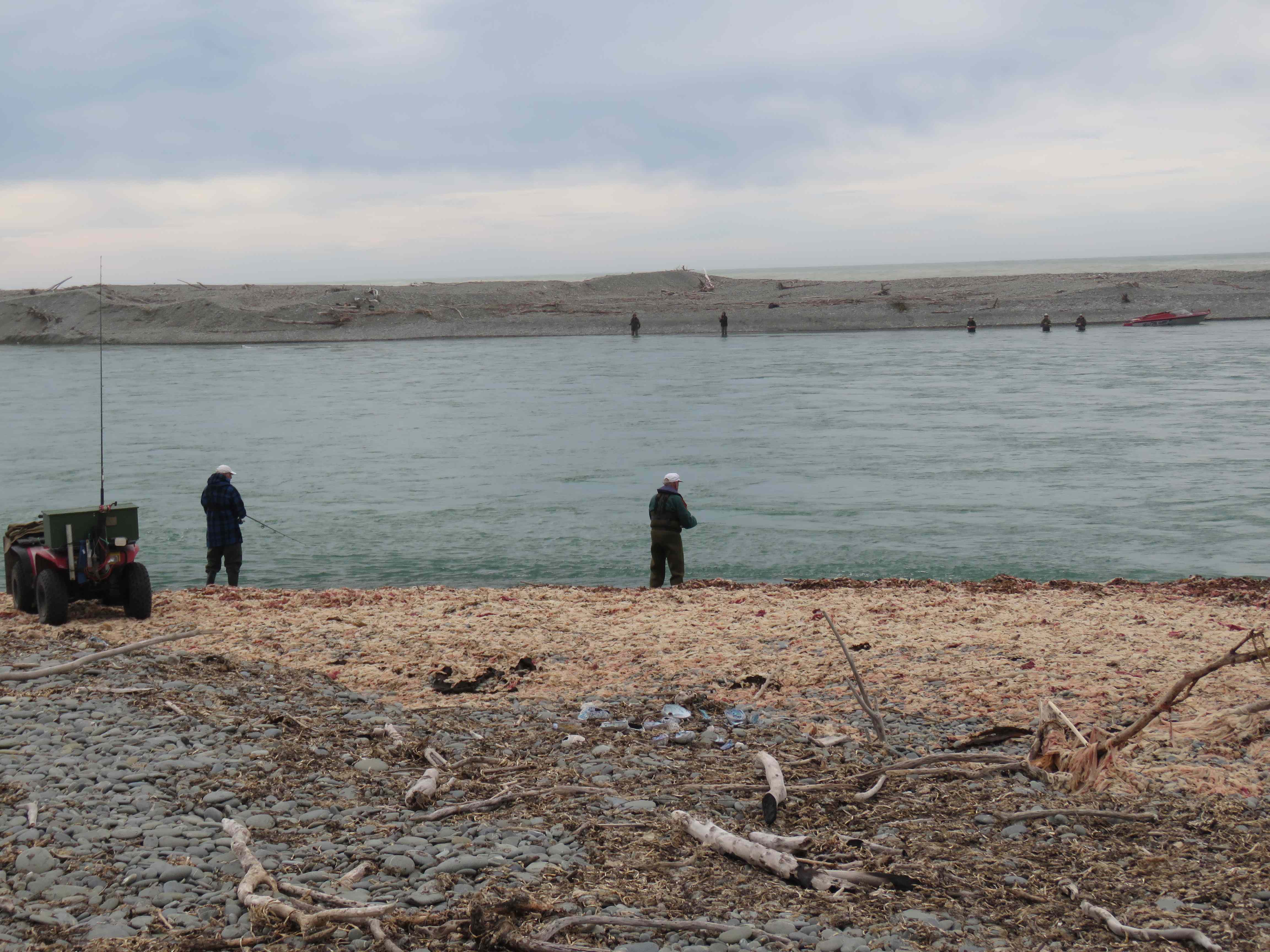 It’s a stuck record start to this report; another region-wide rain event during the week means you should be sure to check ECan river flow website before you hit the water this weekend.

Further to that the sea-run salmon fishing continues to be slow while the sockeye salmon run in the Waitaki lakes continues to go great guns.

Hamish and I visited the Waitaki mouth earlier in the week and there was some angler activity but little in the way of salmon catches to report.

Gauging from the various anglers we talked to, in the last week or so I’d guess 1-6 salmon are getting caught daily in the Waitaki River, if river conditions are suitable.

Most often 1 or 2 daily I’d guess, didymo hasn’t been too bad lately so that’s has made fishing more enjoyable.

One angler we talked to had caught two salmon for the season, the effort involved was 19 trips on his jetboat at about 6 hours fishing per trip. I’ll leave you to do the sums on his catch rate.

Sockeye salmon surveys have continued and will finish up in early April with the end of the main run.

We continue to find hundreds or thousands in the waterways we survey.

We plan to share total populations estimates with you once the surveys are complete and report written.

If you are up in sockeye country over the next couple of weeks bear in mind that they all die after spawning.

The scenes you may come across could be fitting of a zombie apocalypse film produced as a horror for those with a phobia of salmon. 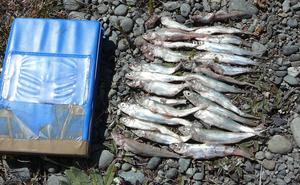 A 26 sockeye meal extracted from a Lake Benmore trout's stomach.

Nature is a powerful thing and in a few months their carcasses will be decomposed and washed away.

Sockeye spawning effort is believed to support the great Waitaki lakes trout fishery by providing their millions of offspring as a food source for the thousands of large trout.

This phenomenon was graphically illustrated a few years back when an angler presented the stomach content of a single brown trout they had caught in Lake Benmore to a Fish & Game Ranger.

As you can see juvenile sockeye can make an impressive contribution to a trout’s diet.

On the topic of getting a gut full, angler Keith Smettem got in touch to share a pic of his well-fed 30lb brown caught at the canals on fly this week. 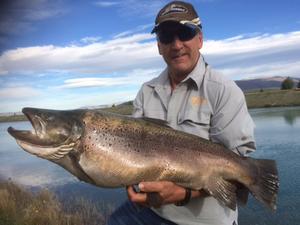 Keith reckons it would be an 8lb IFGA world record brownie for conventional fly fishing methods, but he couldn’t get the weight verified on IFGA scales in time.

Keith was fishing with a shrimp pattern fly and stalked the brown.

He said that currently, with murky canal water, the fish are less spooky than normal but they are tricky to find.

If Keith can’t spot the fish he’ll use a switch rod with a sink tip scandi-head and mini lures, fished deep.

He usually picks up a rainbow or two in the 2-4 pound range with this method.

If you’re really bored this weekend, like solving mysteries, walks on the beach, or watching hundreds of game birds then you may be able to help me answer a question.

The background is that Hamish and I visited Fish & Game’s Wainono Reserve Wetland during the week and had some “Nessie” moments. We sighted, stumbled into and even followed “fish” around, but couldn’t identify them in the murky water.

The wetland is off the end of Poingdestres Road near Waimate and adjoins Lake Wainono.

Access to the wetland and Lake Wainono is along a beach track leading north. 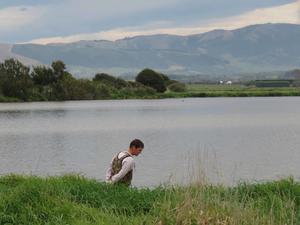 I recommend you walk rather than drive, unless you’re a local that knows the loose beach stone track very well.

There are heaps of ducks and all sorts of birds about down there this year so that kept us entertained for a while as wet waded around marking hunting stands.

However, the re-occurrence of fish encounters got us captivated.

The water is silty, or tannin stained at best offering only a small chance of spotting a fish.

There were multiple “fish” sightings, in both the Wetland Reserve and Lake Wainono, these wetlands are adjoined by a small gap in the wetland reserve stop bank.

One fish spooked like a trout and produced an impressive bow wave, another spooked like a flounder with puffs of silt coming up at about 30cm intervals as it fled from us.

A few were on the surface just off the bank by the track: possibly feeding or even gasping for oxygen.

One did a roll of sorts on the surface and we got a brief vision of a silvery flash of a large fishy flank; my initial though was large eel.

By coincidence today I was alerted to an article about ECan staff member Kennedy Lange undertaking a native fish survey at Lake Wainono.

I gave him a call to see if he could help with the I.D., Kennedy said his surveys are designed for eel and he uses fyke nets.

Apart from shortfin and longfin eels he has occasionally caught brown trout and a single perch. He also said he knows of flounder being in the lake as some were found dead there during a spell when oxygen levels depleted some time ago.

The mystery is there to be solved, I’m guessing it’s probably a mix of trout, eels.

If you do have a go at fishing for them stick to the sports fishing regulations and let me know how you get on.

There were a lot of bullies in the rocky areas of the lake shore, so a small whole fish for bait could be the key to catching the culprits in shallow, muddy and murky waters.

You can fish them from the bank, but waders may help in the wet margins.