The three days of rain we received last week was well needed and raised river flows enough, at least in some waterways, to remove significant amounts of nuisance algae.

For the Opihi River, the rain resulted in a decent flow event with the recorder at the Saleyards Bridge (Pleasant Point) peaking at just over 150 cumecs.

The natural flow peaked at about 120 cumecs and was topped up by a control flushing flow from the Opuha Dam down the Opuha River.

The recorder on the Opuha River at the Skipton Bridge measured the peak of the flushing flow at about 54 cumecs.

Leading in to Christmas the Opihi, in places, was getting lousy with algae and the toxic algae Phormidium reached levels prompting ECan to issues river user warnings.

I checked out the river during this time near SH1. On Tuesday I had a nosey at the bottom end of the Opuha River at Raincliff.

I also checked out the Opihi near Raincliff and a few other access points down to the SH1 Bridge.

I got a pleasant surprise at the Opuha River, it appeared the flushing flow had changed the river from its typical near-full coating of didymo to a far more attractive sight-fishable small stream (at about 3 cumecs).

There was a decent amount of didymo in the stable boulder strewn sections but the exposed gravelly areas were turned over.

I spotted three browns in a 1km stretch and spooked another on the way back down. Not high trout numbers but they're there to be caught.

It's fair to say the didymo will return to its former coverage eventually, so if you've ever thought about returning to fish the Opuha River, or fishing it for the first time, then now, after a flush is the time to fish it.

With certainty I can say the flow event improved the fishing conditions on the Opihi River near SH1.

That annoying algae that builds up in the shallow margins was flushed away and the dark- coloured Phormidium, for the most part, was knocked off the rocks.

The other spots I accessed: Hanging Rock, Opihi Road and Saleyards had the same appearance too.

There were stable boulder and cobble sections and small braids that still held an obvious layer of algae though.

I spotted fish at all of these spots, one spot was trout central.

So all-in-all the conditions of the Opihi right now are great for summertime.

Phormidium, being a dark colour can make spotting fish a struggle so with most of that knocked back, and the ugly algae missing from the margins, I’d encourage you to enjoy the pleasant river conditions asap, before it all grows back.

I went down the mouth as well, to check licences and see if any salmon had been caught.

The mouth was open and looking fun to fish and six anglers were trying their luck.

The report is that three salmon have been caught so far this season; last year none had been caught by the same date.

A few trout have added to the action lately too.

While on the subject of salmon, last weekend Waitaki River salmon angler Linn Koevoet had a trip to sea on the Sanford trawler Ikawai to observe salmon bycatch. 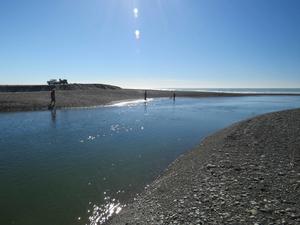 Linn said two salmon were caught on the trip and he identified them as escapees from a commercial farm.

These farm fish are identified by their worn down tail fins.

This week we heard from Melissa Green and her nearly seven  year-old son Benjamin.

He attended the Loch Cameron Kids Salmon fishing day back in November and fished for four hours learning the skills of casting and winding.

He watched the success of others but had no luck.

The family returned to Twizel last weekend and fished Loch Cameron and Lake Ohau over a morning...no luck again.

That evening Benjamin turned his fortunes near the mouth of the Lower Ohau River.

His Mum Melissa said: “His determination and persistence paid off with the successful catch (and release) of a baby rainbow trout.

"He cast, wound and landed the trout, as you can see from the photo, I think he was equally stunned by his catch.  We certainly were given he had caught a lot of weed previously!”

I was up the canals yesterday on ranging duties. Fair to say the fishing was slow.

I only saw one brown caught by a fly angler at the Tekapo fish bowl, on a snail pattern.

At least for the Tekapo Canal the fish were active and obvious but not biting.

The story was that the day before was a bit more exciting with one angler catching a 20 and a 12 pound rainbow midday while bait fishing near the Tekapo salmon farm. Another caught an 8 pound rainbow spinning with a black and green lure at the head of the fish bowl in the evening.

I checked on 44 anglers and detected one offence, a licenced angler fishing with two rods. There were a few anglers about but I wouldn’t say it was busy for a week day.

I hope you enjoy your fishing this weekend. In general the weather is looking okay, but be sure to check the forecast before you go as there might be a stiff breeze at times on the lakes.