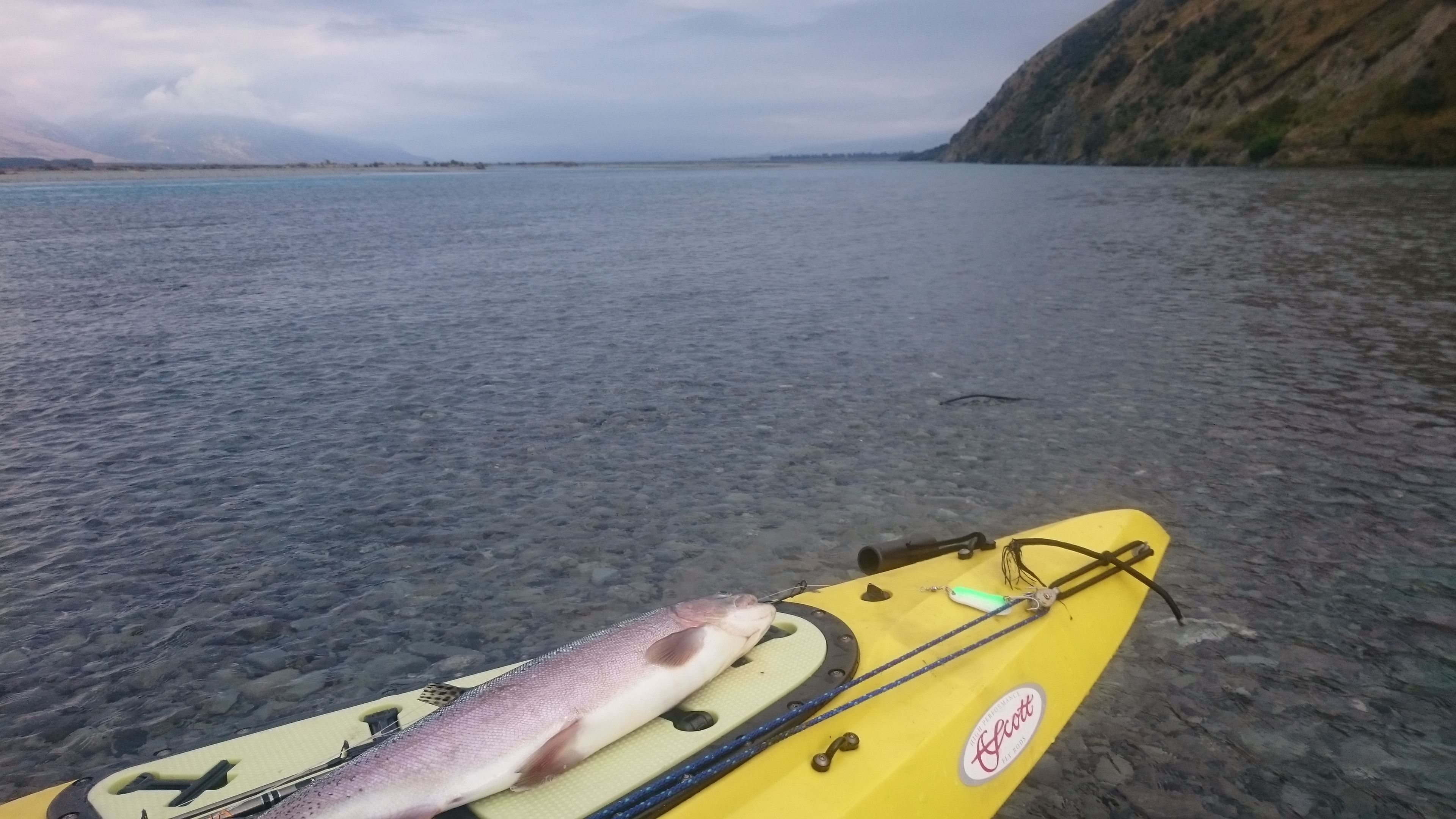 The weekends weather is looking a bit average but there will certainly be opportunities to get out for a fish.

There could be some strong winds at times and rain around the main divide.

Best to check the forecast yourself to find your window of opportunity and keep an eye on the river flows of any rivers draining the main divide.

Above Right: Jayde’s rainbow trout from his salmon fishing trip.

I was out at the lower Rangitata on Thursday morning and the water was still a bit too coloured for spin fishing, even though Klondyke flow at the recorder had the river at about 77 cumecs.

Normally we would expect the river to be clear enough for spin fishing at around 90 or 100 cumecs.

The salmon fishing has been really slow at the Rangitata mouth of late, with only one fish recorded on the south side huts tally board for February.

Let’s just hope they are sneaking through undetected in the coloured water rather than there being bugger all fish around.

During the week I took a mate out on the Opihi River.

I must be mentioning the river too much in this report because there were anglers at the first two access points we visited!

On top of that the fish were as spooky as I had ever seen; spooking when the fly line hit the water on very accurate casts!

It was disappointing not to get a single fish to the landing net and only one take of a fly.

Although it was pleasing to see the river was still in good condition after the couple of recent high flow events we’ve had.

It hasn’t been a particularly photogenic week, but last weekend Fish & Game Officer Jayde Couper fished the Rangitata above the gorge and snapped a nice pic.He was targeting salmon but only caught one nice rainbow trout.

He said he did get a “follow” by a big fish he thought was probably a salmon.

This week Genesis Energy got in touch to update canal anglers about the construction of an irrigation offtake and the restriction that imposes on fishing access to the bottom end of the Tekapo Canal.

The offtake construction requires excavation of the road and other associated activities that will mean angler access is limited for some parts of the canal for a 14-week period commencing Tuesday 20th February.

Vehicle access will be maintained up to the stilling basin (aka head pond aka fish bowl) but a gate will block all forms of access at the construction site a few hundred metres further.

Walking access and bicycle access will be available around to the dam and up the true right side (Lake Pukaki side) of the stilling basin and canal up to the salmon farm.

Have your say – RDR consent application

Anglers have one final chance to be involved with the upcoming hearing of Rangitata Diversion Race Management Limited’s (RDRML) applications for various activities involving the Rangitata River.

A second suite of applications was notified on January 20.

You have until 5:00pm on Monday the 19th of February to submit specifically on these.

Of particular interest to anglers are the applications for:

To submit and find all application details and background documents click here to link to the submission page on the Environment Canterbury Website.

Submitting is not difficult, it can all be done the on the website.

There is a tick box for each application and you decide whether to “support” “oppose” or “neither” and whether you wish to be heard.

After that you need to only provide broad bullet point reasons for your choices and finally an indicator of what decision you wish the hearing Commissioners to make.

The hearing is set down for 23 April for 9 days (excluding ANZAC day in the middle of that) in Ashburton, venue TBA.