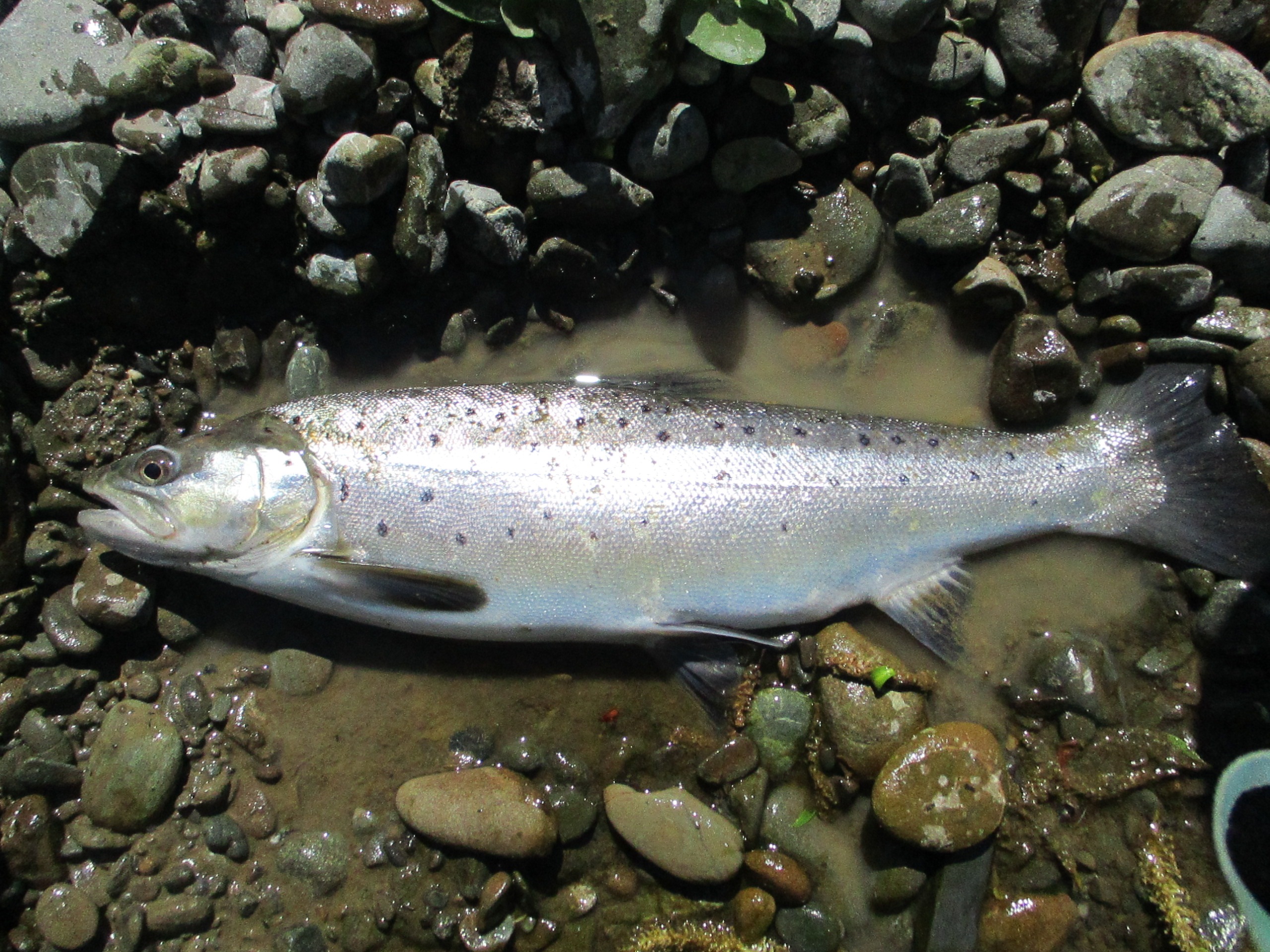 We have had some rain this week, overnight on Wednesday/Thursday and now it is raining again right now, Friday morning.

The rain earlier in the week did very little to river flows but region-wide river flows are ramping up as I write.

The forecast has the rain a lot heavier from about the Opihi Catchment and north, with snow to low levels.

Above Right: The authors silver sea run-like trout from the Opihi Catchment.

This rain is welcome after we have had an extremely settled end to winter and start to the fishing season.

For catchments like the Opihi, so far this season, we have had relatively low flows and excellent sight fishing for well-conditioned browns.

The rain will help to prolong this period of good spring fishing in to summer.

My advice is to make the most of these excellent early season conditions, summer can kick-in hard in North Otago and Canterbury.

The weather forecast is looking cold and showery for Saturday, but decent for Sunday afternoon.

There will be fishing opportunities for those willing to hit the road and make it work.

Lake Opuha and the canals spring to mind as post rain options.

I recommend you check the flows before you go, especially in Mid-Canterbury, there is a reasonable chance the Ashburton River will be high and discoloured for the weekend.

I made it out for my first cast of the season last Sunday to a favourite corner of the Opihi Catchment and found those great conditions I mentioned previously: stable flows, crystal clear water and heaps of fat trout on the feed.

Some of the fish were very fussy, some were spooky and three thought my flies were food.

I couldn’t tempt the biggest trout, but a size #14 bronze beaded pheasant tail and a plain #16 hare and copper worked for me on fish in the 1.75-3-pound size class.

After gutting the first fish I caught and finding it chocka full of cased caddis, I switched to a hare and copper, tied slim and with little tail, and the fish were much more interested.

Two of the fish I caught were shiny silver and I wondered I they had spent time around the Opihi lagoon lately.

Earlier in the week I caught up with an angler who regularly fishes the Rangitata mouth and lagoon for trout.

He said the start of the season has been tough with very few trout caught.

He said the lagoon is huge, 200 metres wide in places, and the trout and their prey are not concentrated in easy-to-target spots.

He said that silveries (smelt) have been running for a week or so now and reckoned the river needed a fresh to reset the mouth and lagoon for the fishing to improve significantly.

We have received the first report of a tagged trout catch at the Waitaki, brown trout #086, not far from the confluence of the Hakataramea River.

Have you caught a tagged trout in the Waitaki this season?

To help you visualise the tagging programme we put together this short YouTube video.

Anglers fishing the lower Tekapo Canal and Stilling Basin over the week of the 15-19th of October may notice some activity involving divers and machinery in the area.

The purpose of the activity is for Mount Cook Alpine Salmon (MCAS) to remove a build-up of sediment comprising a combination of Salmon Farm by-products, algae, weed and sand that have formed where the flow from the canal slows-up and enters the stilling basin.

MCAS will be using an underwater vacuum cleaner known as a suction dredge and placing the material in a special bag to compost.

The vehicle on the true left will be parked clear of the road, so vehicle traffic will not be affected.

This activity is being undertaken to make use of a half flow period that Genesis have scheduled due to annual maintenance for the Tekapo Power Scheme, so anglers who like to fish the Tekapo Canal at full flow may wish to fish elsewhere.