The opening of the new sea-run salmon season is upon us.

Sunday the 1st of December heralds the opening of the new-look shortened salmon season.

The low returns of sea-run salmon in recent years has required CSI and North Canterbury Fish & Game to make conservative changes to the regulations for the 2019-2020 season.

We hope this will instil a conservative mind-set in anglers to allow more wild salmon to get to the spawning grounds.

RIght: The sun will rise on a new-look sea-run salmon season on Sunday the 1st of December-Credit R Adams

To many anglers they are king of the sports fish - the ultimate prize to bring home for the family to feast on.

However, times have changed and it’s now time to redirect the focus from harvesting and high season tallies to enjoying the places and faces of our sport.

Go salmon fishing for the scenery, the water, to share your skills with the next generation and to enjoy the comradery of fellow salmon enthusiasts.

With the delayed opening in place for the 1st of December we hope you get together with your mates find some good water and make an event of the occasion.

If you are lucky enough to land a salmon be sure to treasure it.

Anglers now need to ensure that the effect of our harvest on the run is reduced and enables enough salmon to reach the spawning grounds.

This season, in the CSI Region, to reduce harvest, the daily bag limit has been decreased to 1 sea-run salmon.

Further restriction has been put in place to restrict night-time angling and winter-season fishing.

Be sure to read-up on the new 2019-2020 season regulations to ensure you stay legal, an online copy is available here.

Additionally, we are asking you actively participate in reducing harvest by voluntarily reducing your total season sea-run salmon harvest to four or less.

So good luck for Sunday and as with all salmon seasons, we wait in anticipation to see how the run goes this time round.

If you intend to fish the Rangitata this weekend be aware it has been holding high flow and running silty for some time now and may take a while to become clear enough to fish.

Historically the Rangitata had fishable clarity at around 110 cumecs or less but in recent years has varied more often between 80-100 cumecs. 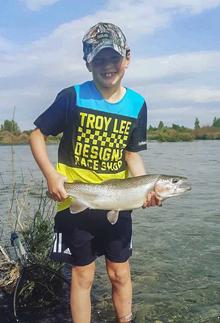 Other main divide rivers like the Ahuriri will be running high this weekend but may be fishable.

Keep an eye on those rivers on the ECan river flows website.

And keep in mind the upper Ahuriri River and its tributaries, tarns and lagoons don’t open until the following weekend – Saturday the 7th of December.

Saturday is looking to offer great region-wide weather conditions for fishing, but the wind will pick up through the day so best to set the alarm clock and make the most of it.

Sunday looks to be windy, especially in the high country and the main divide will receive some rain in the afternoon.

I reckon sheltered low country areas should offer the best fishing on Sunday.

If you’re looking for waterway ideas, then you should consider having a go on the Tekapo River this season.

My Colleague Hamish and his family fished the river last weekend and had good success.

Flyfishing with nymphs and spin fishing were both successful and at the end of the day when a trout was required for the BBQ a worm drifted through a pool seemingly void of fish produced.

Sight fishing was possible in places, but it was worth fishing all the good water regardless. 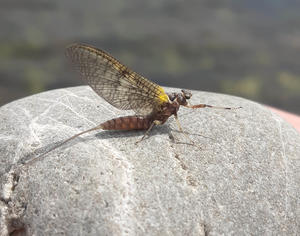 There was a mayfly hatch too.

The flow and clarity were good at 14 cumecs but discoloured slightly as the river rose through to 16 cumecs.

When trying to predict the Tekapo River conditions, the Forks River tributary is the main influence of high flows and discolouration.

Rain, snow melt and even strong winds can silt up the Forks which is the main source of water for the upper river.

A 4X4 vehicle is recommended for accessing the Tekapo River but a car and walking will get you to the river too.