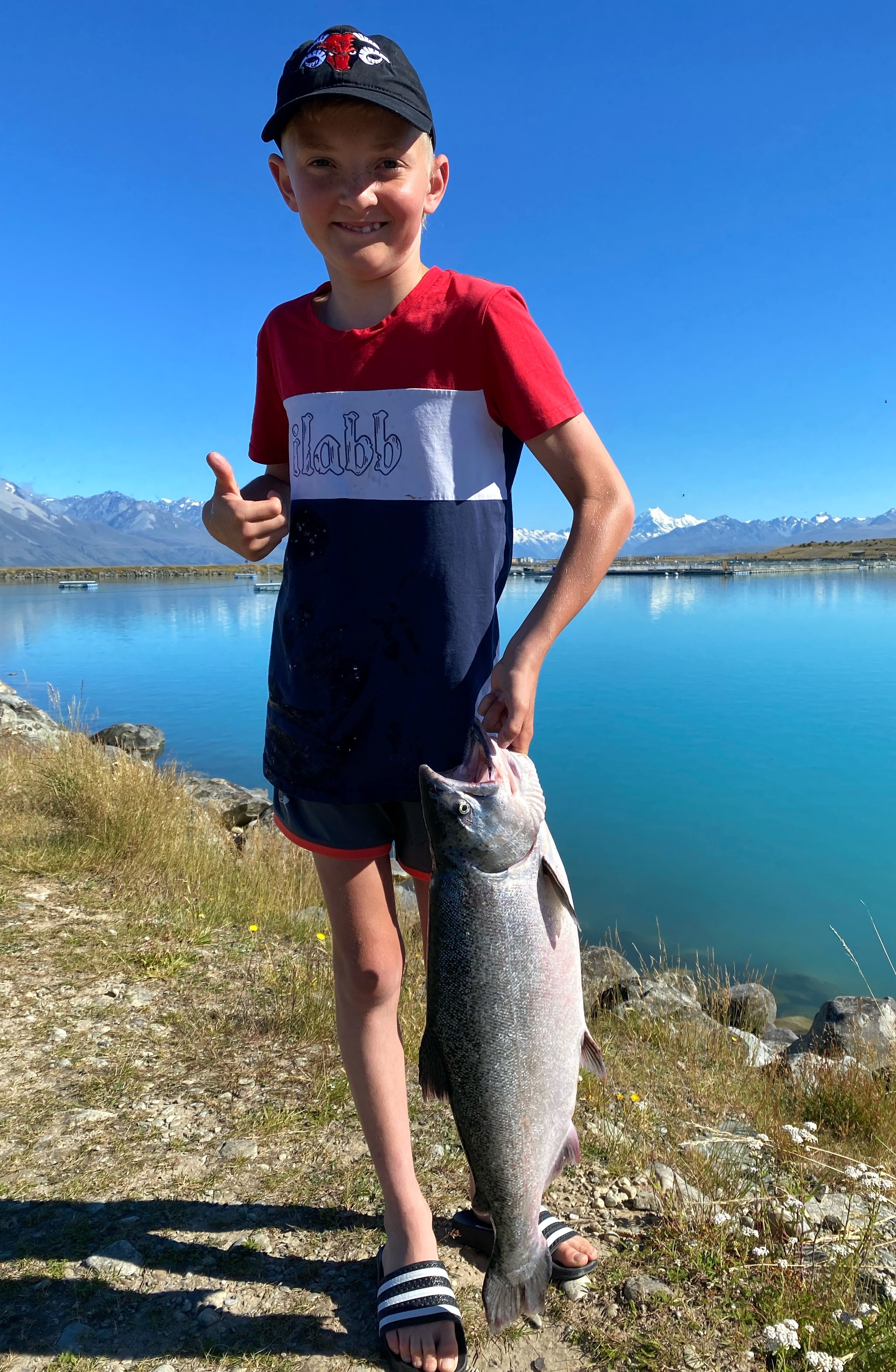 Thanks to anglers named Chris we have a few more catch reports to share this week.

The first two of the reports come from the “Fishbowl” at the downstream end of the Tekapo Canal.

Other names for the Fishbowl are the Stilling Basin and the Tekapo B Head pond.

Chris House got in touch to share a story of his 11-year-old son, Josh, catching an 11.7 pound salmon in early January — his personal best.

Chris said the catch got a lot of attention from the other anglers as it was only Josh’s third cast and no one else was catching anything.

Josh was spin fishing with a 21 gram Chinook lure. 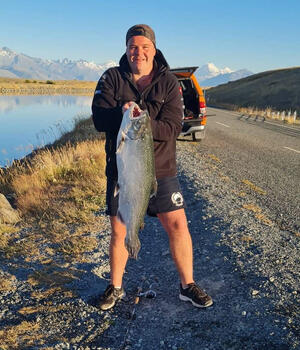 Chris Quigley hoists his 23-pound salmon from the Tekapo Canal

The next report and photo is of another awesome canal salmon catch on a spinner – this time a favourite for trolling lakes was used – the traffic Light Tasmanian devil lure (aka Christmas Tree).

In Mid-January Chris Quigley caught his first ever salmon, a whopper at 23 pounds.

Our third report come from Chris Fifield who ventured down to the Opihi River for an overnighter two weekends back and tells the following story.

“I was fishing into the riffles just below the big pool at Hanging Rock Bridge right on dusk as a few fish started rising. I hooked into a very nuggety fish that tore line off my reel flew all over the pool and jumped 3 times before I finally got it into the bank.”

“Very surprised to find it was an excellent conditioned rainbow of approx. 3lb. I would have knocked it on the head to eat if I actually had a chilly bin to keep it in, but as I was just expecting browns on this trip (catch and release) I had nothing to keep it in.  It’s back in there for another lucky angler…”

“Sundays wander up the river was blighted by heavy overcast low cloud so almost zero vis into the water, but once that burnt off, I was lucky to see some lovely fish and got a nice 5lb brown to the net to cap off the trip down. Very slippery wading with the low river conditions.”

Although a rare catch, every year we hear of one or two rainbow catches on the Opihi River — this time its Chris’ turn.

Thanks to Chris 1,2 and 3 for the reports, any other Chris’ out there with fishing reports to share from the waters if the CSI Region can please email them through to radams@fishandgame.org.nz 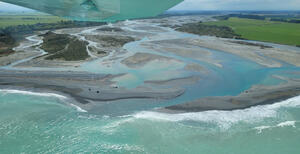 If you are lining up a trip to the Rangitata River for Waitangi weekend you may want to bring it forward to this weekend.

There is a pretty hefty rain event forecast to hit the main divide mid to late next week – just in time to make the river unfishable for Waitangi Weekend. Things may change but its one to keep an eye on.

The weather forecast for this weekend is looking pretty good, however.

The Rangitata is looking great for fishing currently and there have been just enough sea run salmon catches this season to support optimism that we are in for a half-decent season -at least, compared to the last few.

The salmon catch tally board at the Whipp’s hut at the South Side Huts on the Rangitata has 24 salmon recorded, 22 from January — as of Wednesday afternoon. This tally accounts for only salmon caught on the South Side of the mouth and nearby upstream.

We flew past the mouth on Tuesday afternoon (pictured) and there were a handful of anglers trying their luck.

If you are one of the lucky ones to have already caught and kept your season bag limit of 2 sea run salmon from combined waters of the Central South Island and North Canterbury Region then please return your completed sea run salmon season bag card.

You can drop off your card into the office, post it to CSI Fish & Game, PO Box 150, Temuka 7948, or photograph it and email to harvestcard@fishandgame.org.nz

Tekapo River flows in the lower river, downstream of the Mary Burn confluence, can be view on the ECan website here.”

The Bi-monthly Council meeting will be held online via Zoom as a precautionary approach to the health and safety of Council and Staff regarding Covid.

The meeting will be recorded and available at a later date on CSI Council Downloads page of the www.fishandgame.org.nz.