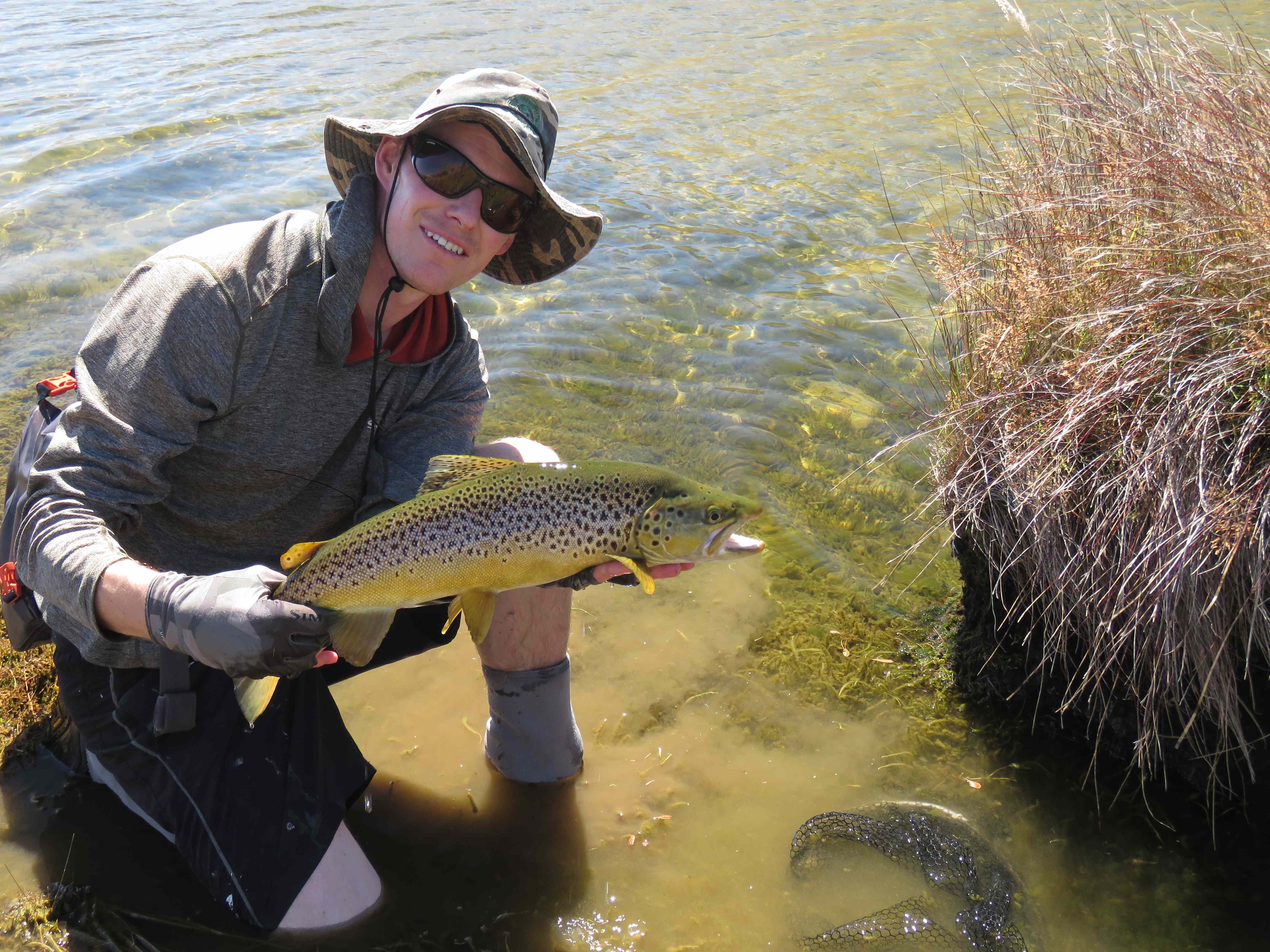 There is some amazing trout fishing too be had currently, I can tell you that first hand.

I have also seen some great potential while rod-less on the river.

They provide for thrilling dry fly fishing and iconic leisurely days recreating on our high-country lakes, but they also cause waterways to dry up and eye-sore algal growth to flourish in the sun-baked low country waterways.

Above Right: The author and his high-country brown trout from an overlooked 'spot X'' credit R Adams

We undertook our first fish salvage of the season this week, although it turned into a non-event.

We were alerted to schools of trout stranded in pools on the Waihao River below the State Highway One Bridge.

This section dries out pretty much every year. It turned out to be schools of Inanga and smelt (silveries) rather with some short fin eels hiding under the banks.

We relocated those downstream to permanent water.

Our wet spring and summer are now all but forgotten as several weeks of hot summery weather have had their effect on our waterways. Luckily, and in the nick of time, there is a burly wet front set to slam us this weekend.

We need some rain so let’s hope we get some minor flood flows down our low country rivers to scour the algae of the rocks and reset the river flows for the autumn ahead.

As I write this on Wednesday the weather forecasts are variable so I’d recommend you review the latest forecast before heading out, but I think you can anticipate both good and bad weather from Friday through Sunday and some respite from the heat.

Back to that amazing trout fishing, not to gloat, but I had an hour of dry fly magic in the weekend.

If you ever decide to take up fly fishing one thing you should do is focus your efforts on dry fly fishing in the high-country during February.

This is a time of ego enlargement, chest puffery, and big tips for fishing guides from gobsmacked clients.

Not because the angler’s skills are at their best, but because the trout feed almost recklessly, crap casts will catch trout.

The start of many fly anglers’ careers, including mine, are fraught with tangles, botched casts and spooked fish.

In February its quite normal to have trout give away their positions with splashy rises and wayward cast within 5 metres of the fish can be good enough to attract a fish over for an aggressive take.

You can even tweak the fly or slap it down on the cast, no natural drift or finesses is needed to entice the trout to bite.

My outing consisted of checking out a high-country waterway overlooked by all but the occasional local, which was confirmed by the lack of any sign of foot prints in the mud.

I made six casts, hooked four fish and landed three.

I used a Parachute Adams dry fly for the first two fish and then for the novelty I switched to something they should refuse, a big gaudy black Swisher’s foam PMX.

They didn’t refuse, but I suspect that bringing life to the fly by tweaking it, helped to entice the take.

I’ll share the photo of the most impressive fish I landed and make an admission that the photo is taken intentionally without a back drop.

I think it would be irresponsible of me to tell our 12,000 weekly fishing report subscribers where I was and spoil this spot for the next angler who stumbles upon this easy access “secret spot”, besides I only spotted five fish.

The other spot I alluded to with “great potential” was closer to home, the Temuka River.

Now bear in mind I only visited two pools, one above and one below the Manse Bridge and it was last Friday. 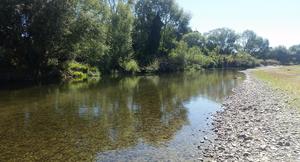 The Temuka River at Manse Bridge

What I saw was impressive for this time of year.

There were good flows, enjoyable algal-cover (if that exists) and enough adult trout to keep an angler occupied.

Considering its mid-February and it has been scorching hot, it’s a great reminder to make the most of your licence and get out for a fish, near or far.

And sorry to the Temuka locals for telling our 12,000 subscribers about our river.

The sea-run salmon season rolls on with limited reports of success reaching the office.

For our rivers the next month is generally the best time to fish for salmon so those yet to bank one this season will be awaiting the “main run”. Whether that happens will develop in time, no one can predict a salmon run, at least I can’t.

One update on the season I can provide is that there have been 20 salmon catches registered on the South Camp weigh-in board at the Whipp’s hut on the Rangitata for the month of February and 40 total for the season.

Four were caught on Monday and none on Tuesday or Wednesday morning.

In the CSI Region our sea-run salmon season finishes at the end of March so its time to go have a crack if you haven’t already this season. You may just time it perfectly.

The NZ Jet Boat River Racing Association would like to notify anglers that a jet boat race will be held on the Waitaki River on Saturday the 23rd of February 2019.

Racing will occur from SH1 through to Kurow and is scheduled to start at 10am and finish at 4pm. From around 12 noon the racing will be limited to the river upstream of the Otiake River confluence.