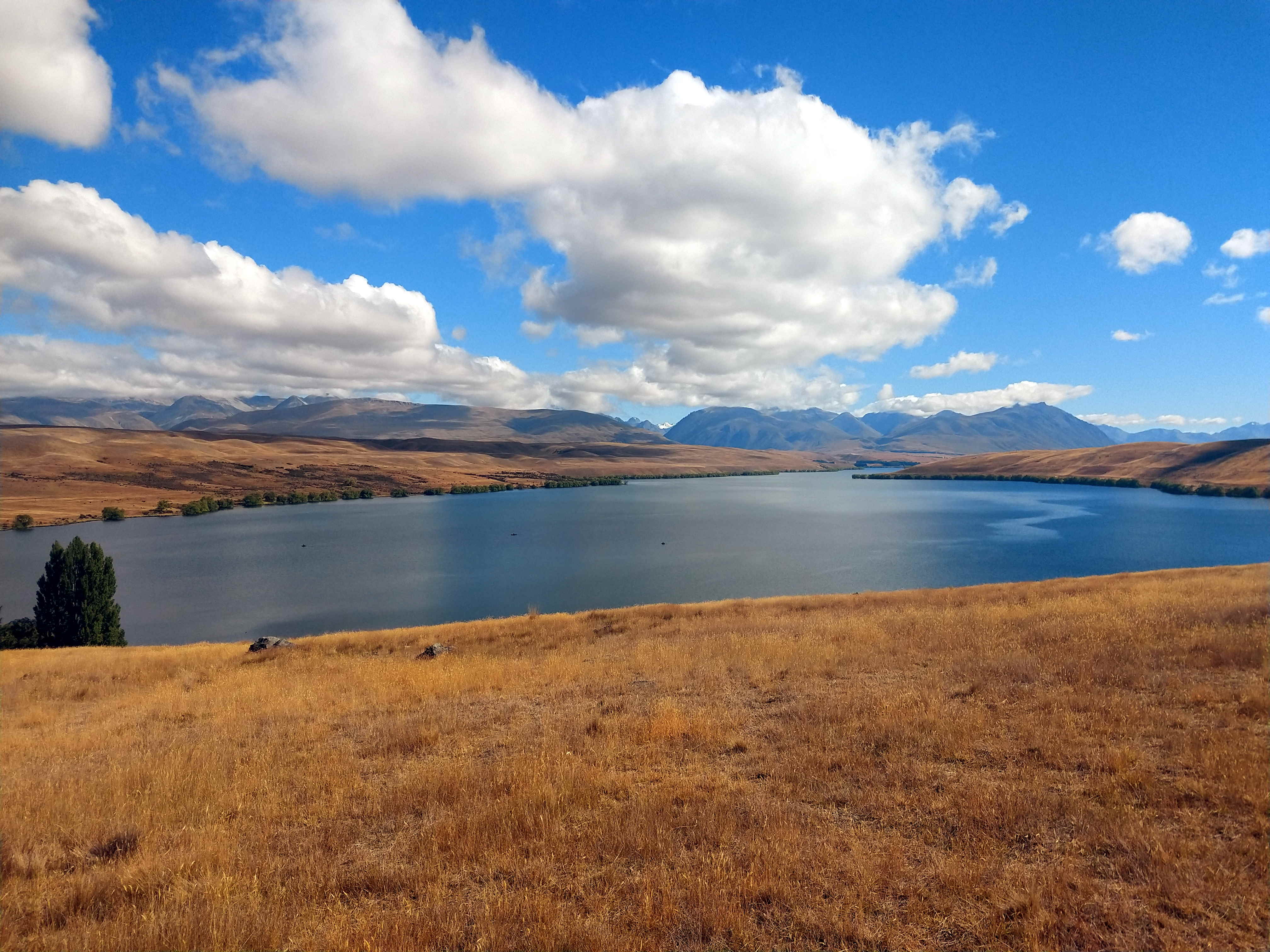 In the last week, I’ve managed to get around a fair chunk of the CSI Region and things are looking pretty good for this time of year as flows remain healthy following the big rains.

Lake Alexandrina is likely the CSI regions best large sight fishing lake however, you can have a lot of success blind fishing the depths.

I called into the southern end of Lake Alex to remove an old regulation sign that was in poor condition.

The cold, calm morning meant the lake was close to postcard-perfect and a few anglers were out in dinghies trying their luck.

Above: Lake Alexandrina on a calm day.

I managed to run into a couple of Temuka locals, Warren and Billy who had popped up to the lake for a couple of days and were running a friendly biggest fish competition for the morning. 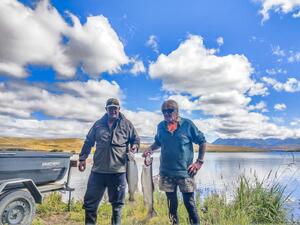 Warren and Billy with their Lake Alexandrina rainbows.

Warren and Billy both managed to land a nice rainbow each before having to head home.  Unfortunately, no one had scales there to declare a winner.

It’s a bit hard to tell from the photo that the fish were too close in weight to call, Billy’s fish, the shorter one was in fantastic condition.

The smaller lakes of the Mackenzie were mostly unfished, although I ran into a couple of mates setting up on Lake Poaka and was able to send them to a spot where I had seen good numbers of cruising brownies around a month ago.

The cicadas were feverishly chirping away in the grass all around the small lakes but no sign of them on the water.

The canals were inconsistent with a few lucky anglers doing well in some spots.

There were very few anglers on the Pukaki and Ohau B canals, and the ones I did talk to weren’t having much luck.

Ohau C seemed to be the pick of canals with a few anglers picking up salmon over 10lbs.

One angler I checked, Rosie, was happy to have her photo in the newsletter and share that her lucky lure was a bright green soft plastic.

It didn’t seem like there were loads of salmon around as there were quite a few having no luck, but I still think it’s worth a look if you are in the area. 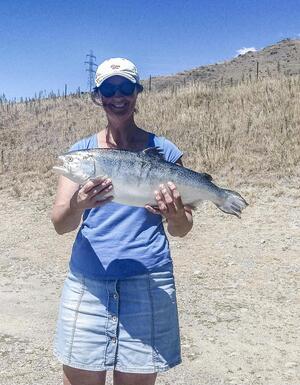 My colleague, Hamish briefly fished it last weekend and saw a few salmon caught as well.

The latter part of that afternoon was spent trying to track down some non-compliant anglers.

The office received a phone call from an angler which was passed on to me.

I spent a while keeping an eye on them but, unfortunately, I was unable to catch them in the act.

Remember it is an offence in CSI to treat fish you plan to return carelessly and that this includes, winding fish up the side of the dam or allowing them to flop around on the bank.

If you plan on releasing a fish, it’s important to minimise the time the fish is out of the water.

Further down country, the Waitaki is looking pretty good. I called in and checked the fish logs at the south kaik and saw very few salmon landed, at least on the south side.

If you are after a Waitaki salmon, late February through March is your best chance.

The walk to mouth on the south side is not too bad at the moment.

If you’re keen on heading to the Northside, allow time for a long walk around the lagoon.

The Rangitata has had a few salmon caught at the mouth over the last week.

The river has come back down to base flow following a fresh on the 10th.

Our diary records show that salmon are sometimes caught in clear water but it does reduce your chances.

Fishing the mouth would be a good option in the clear water.

On a personal note, I managed to get out at the weekend and fish a popular Ashburton River tributary for the first time.

I’ve walked it in winter a few times to monitor spawning trout and salmon, so it was good to finally make it up there for a fish.

I found good numbers of trout but unfortunately, they were mostly holding tight under the willow trees draping in the water and required better casting than I was able to muster.

I came away without a single take and a timely reminder to keep working on my casting.

Still, it was worth the trip, and I’ll definitely be back with a new plan and hopefully manage some slightly better casting.

Have a great weekend!

Meridian Energy has a scheduled flushing flow planned for the Waitaki River on Wednesday the 24th of February. The intent of the flow is to remove algae including didymo from the riverbed. The flow will be at least 450 cumecs, so the river will be unfishable for a couple of days.

Earlier in the week, the was a health warning issued for potentially toxic algae (cyanobacteria) in the Ashburton River. If you are planning a trip, make sure to visit Environment Canterbury’s website to view up to date notifications and information regarding toxic cyanobacteria warnings.