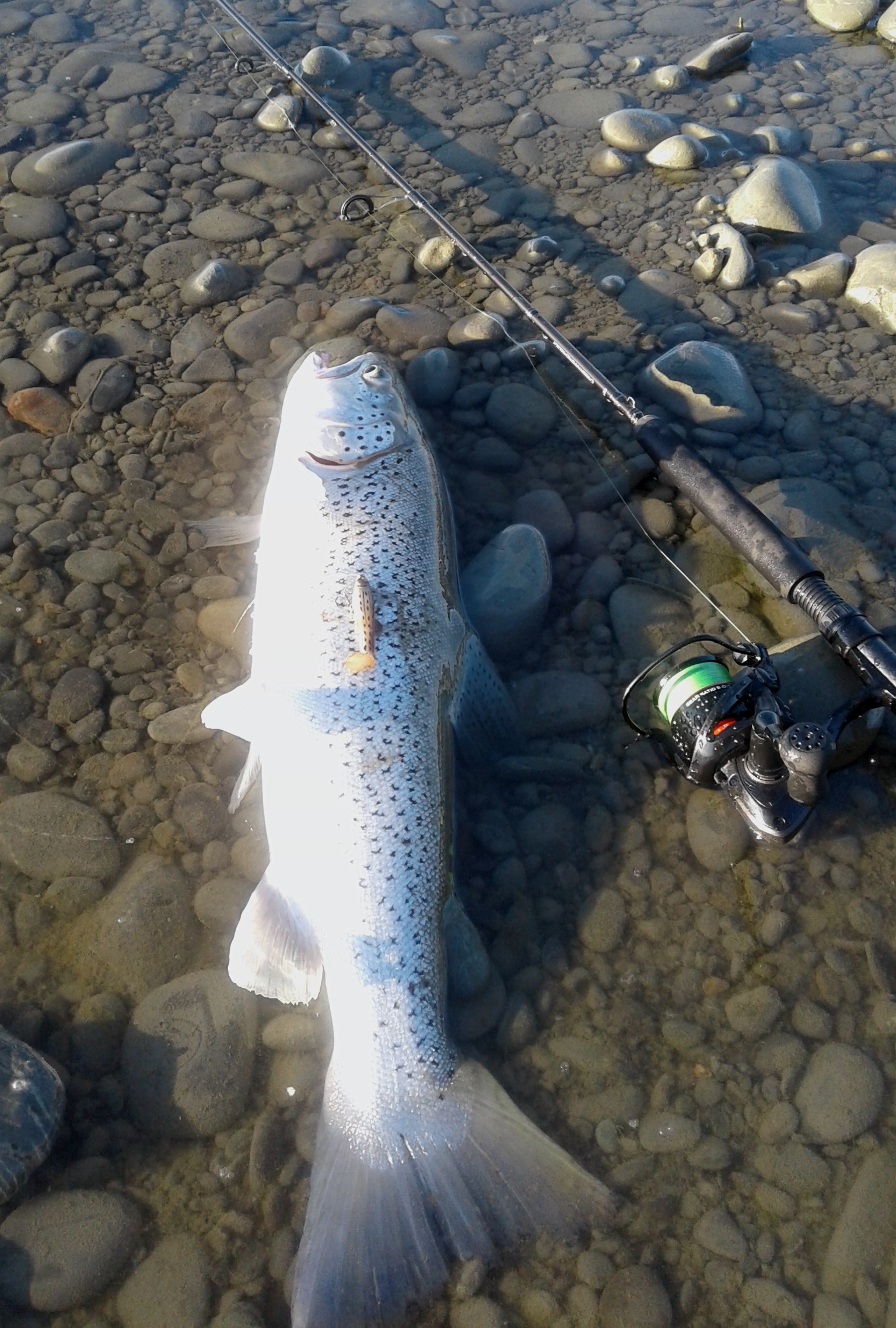 After providing reports on salmon fishing at the Opihi and Rangitata rivers last week I thought I better do the same for the Waitaki this week.

I got in touch with Richard at Oamaru Sports and Outdoors, he’s a man with his ear to the ground for Waitaki River fishing.

Richard said he has heard that three salmon have been caught this season and said there have been reports of salmon sighted at the Waitaki Dam.

Richard also had a very interesting discussion with the witness of an extraordinary catch; it appears a 55 pound (24.9kg) brown trout was caught in the Pukaki-Ohau A Canal.

The angler appears to be keeping the catch low key for now, but Richard thought that sometime in the future the pictures and story will come out to verify the catch.

Would that be the first 50+ pound trout caught at the canals and the biggest brown trout ever caught, anywhere?

I think it might be, someone email me if I’m wrong radams@fishandgame.org.nz

I was back down the Opihi mouth on Sunday kahawai fishing.

I bumped in to an angler who reported three salmon were caught in the surf on Saturday, but it appeared none on Sunday.

The kahawai were abundant again and the ones that I harvested had guts absolutely bursting with bait fish.

Although partly digested I reckon they were smelt (silveries).

I’d imagine the trout fishing in the lower rivers should be on fire now with trout keyed-in on smelt.

No anglers where present at the Ashburton so Hamish flicked out a Storm Muddler soft plastic lure in to the top of the gut and caught a four pound sea run brown.

Hamish does well on this lure and I used to do well on West Coast sea run browns with them.

Can’t say I have found them in the shops lately, anyone still sell them?

Hamish said the river was clear (13 cumecs @ SH1) and the mouth was open to the sea.

If you are an Ashburton River mouth angler, please visit the ECan website here and fill in a river user survey.

The way the mouth area is managed is under consideration, and changes could be made.

Please be sure to say what you value and what you want improved or maintained.

At the Rangitata mouth Hamish encountered 17 anglers, four being on the north side.

The report from one regular north side angler was that there have been three salmon caught at the mouth and three just upriver this season.

Over on the south side, the salmon run lately could be described as a trickle. 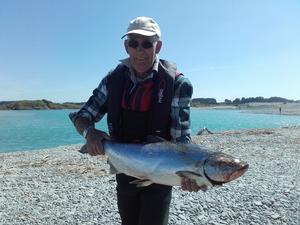 Hamish caught up with Ian Jenkins who had decided that he better dust of the old line for his first fish for the season.

He caught a  solid 15-pound salmon as you can see in the attached photo.

Story go’s one salmon was caught there the day before too, by another angler having their first go for the season.

Is there a moral to this story?

The rain events this season have been relentless and accordingly we had another dose from the sky last Sunday.

Most of our river received a bump in flow, most notably the Pareora and Kakanui.

By Friday all river levels should be fine for fishing, even if we get a shower or two of rain over night on Thursday (tonight) and a few more through Saturday.

Another westerly front is set to hit the divide this weekend, so keep an eye on river flows in the Rangitata and Ahuriri.

They might come up Saturday afternoon and probably will be up on Sunday.

A quick reminder, you will always find a link to the ECan river flows website at the bottom of this email in the blue banner.

For Saturday and Sunday, In the high country, the Metservice Canterbury High Country forecast is predicting gale force winds at times.

Keep this in mind boaties.

There will be westerly winds at times which is generally offshore direction on the East Coast and is suitable for salmon surf fishing at the river mouths.

For surf fishing, wind speed under 10 knots is best and wave height can be challenging for fishing if over about 1 metre.

A rough guide to forecasting the surf conditions can be had by reviewing the Jacks Point (Timaru) surf forecast here.

My advice is to take a second rod suited for fishing the gut or lagoons and then you should have fun regardless of the surf conditions.

Tomorrow (Friday) has the pick of the weather, mainly overcast, but light winds so I suggest you take the day off work and go fishing.

I’ll be ranging so I might see you out there; please remember to carry your licence with you.

These environmental conditions are the exception rather than the rule, so I suggest you make the most of the opportunity and get out there for a cast or troll.

Normally we would be looking to rescue fish from drying sections of river about now, not this year.

In fact, my colleague Jayde Couper fished one of those sections of river yesterday and had a blast hooking and landing three trout on a parachute Adams dry.

Jayde said the fish were feeding on willow grubs but still took his mayfly imitation with enthusiasm.