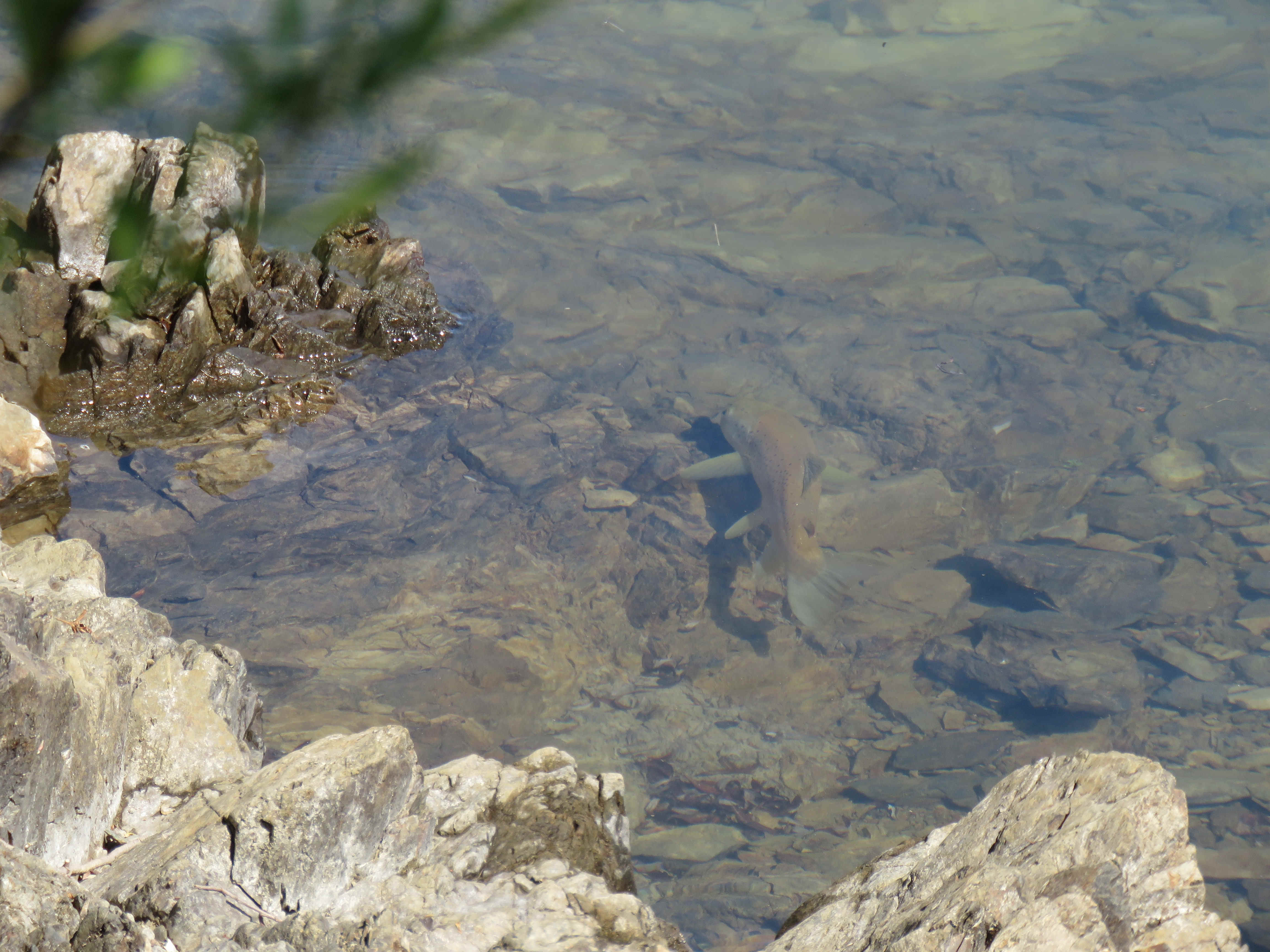 Many of our lowland streams remain low and clear and are providing excellent sight fishing opportunities.

The recent spurts of rain have made only minor jumps in the flows.

The weekend's forecast has only a few hours of rain showers predicted on Saturday in the low country and that won’t make a big difference to flows.

Sunday looks to have the pick of the weather this weekend, light winds, and cool temps in most places.

The Opihi Catchment would be my pick this weekend.

The Rangitata and Ashburton rivers have been affected by headwater rains and snow melt lately and have generally been unfishable, probably the case again this coming weekend.

There is a bit of rain predicted for the headwaters on Saturday to top-up the already elevated flows.

Above Right: A brown trout patrolling the shoreline at Lake Opuha-Credit R Adams

We were up at Lake Opuha on Wednesday doing annual boat training and spotted quite a few brown trout cruising the edges – including right across the Bennets Road boat ramp.

Some of these fish were practically touching the lake shore while patrolling for food items.

The section of shoreline between the Bennets Road boat ramp and the dam provides some high banks and on a sunny day the cruising trout can be spotted easily near the shore.

When fishing lakes like Opuha or the Ahuriri Arm of Lake Benmore, that have shallow margins and a good population of brown trout, it really pays to approach the shoreline stealthily.

Rushing up and throwing you lure out as far as possible will likely just scare away a great opportunity for some sight-fishing excitement.

Fly fishing is arguably the best way to target these fish but spin fishers can do just as well using the bubble and fly technique.

Click here to check out our Advanced Spin Fishing Techniques Guide which details the bubble and fly technique.

Some flies worth trying that you can find at tackle shops are a damselfly nymph, dragonfly nymph, San Juan worm, or a hare and copper.

The Waitaki River has been mainly flowing at flows suitable for all-river fishing this season, being below 300 cumecs.

It is anyone’s guess what the flows will be this weekend, but I’d be optimistic given the useful flows over the past fortnight.

If the flows are up above 350 cumecs its best to go and fish up around Kurow.

Check the Waitaki flows here before you go here and read up on where to access the river here.

The Upper Ohau River Spring Season has been attracting a steady use of intrigued anglers this October.

CSI staff are active on the river this season surveying angler use, catch and satisfaction.

The 2019 Spring Season Survey report can be viewed here.

DOC have a managed black-fronted tern nesting site on a largest river island of the upper Ohau River.

The island is located about 3.6km upstream from Lake Ruataniwha and is identifiable being cleared of vegetation and you will likely encounter some dive-bombing terns.

Tern nests and eggs are camouflaged and practically invisible so please keep off this island to avoid inadvertently trampling on their nests.

One of our honorary rangers was up at the Stilling Basin on the Tekapo Canal this week and witnessed some large salmon getting caught.

While there we ask that you keep an eye out for tagged trout in the Tekapo Canal.

If you catch a tagged trout please get in touch and let us know the unique four-digit tag number, location, whether it was kept or released and an estimate of size.

Thanks to those anglers that have reported catching tagged trout recently.

Most tagged trout have been caught within a few hundred metres of the release site – the upper most bridge on the Tekapo Canal and a only a small number have been caught at the Magic Carpet and down by the salmon farms.

There are also tagged trout in the Ohau C and Pukaki-Ohau A canals for joint research project between CSI Fish & Game, Meridian and NIWA.

If you catch one of these trout get in touch with NIWA Project Manager Dr Phil Jellyman (phillip.jellyman@niwa.co.nz).