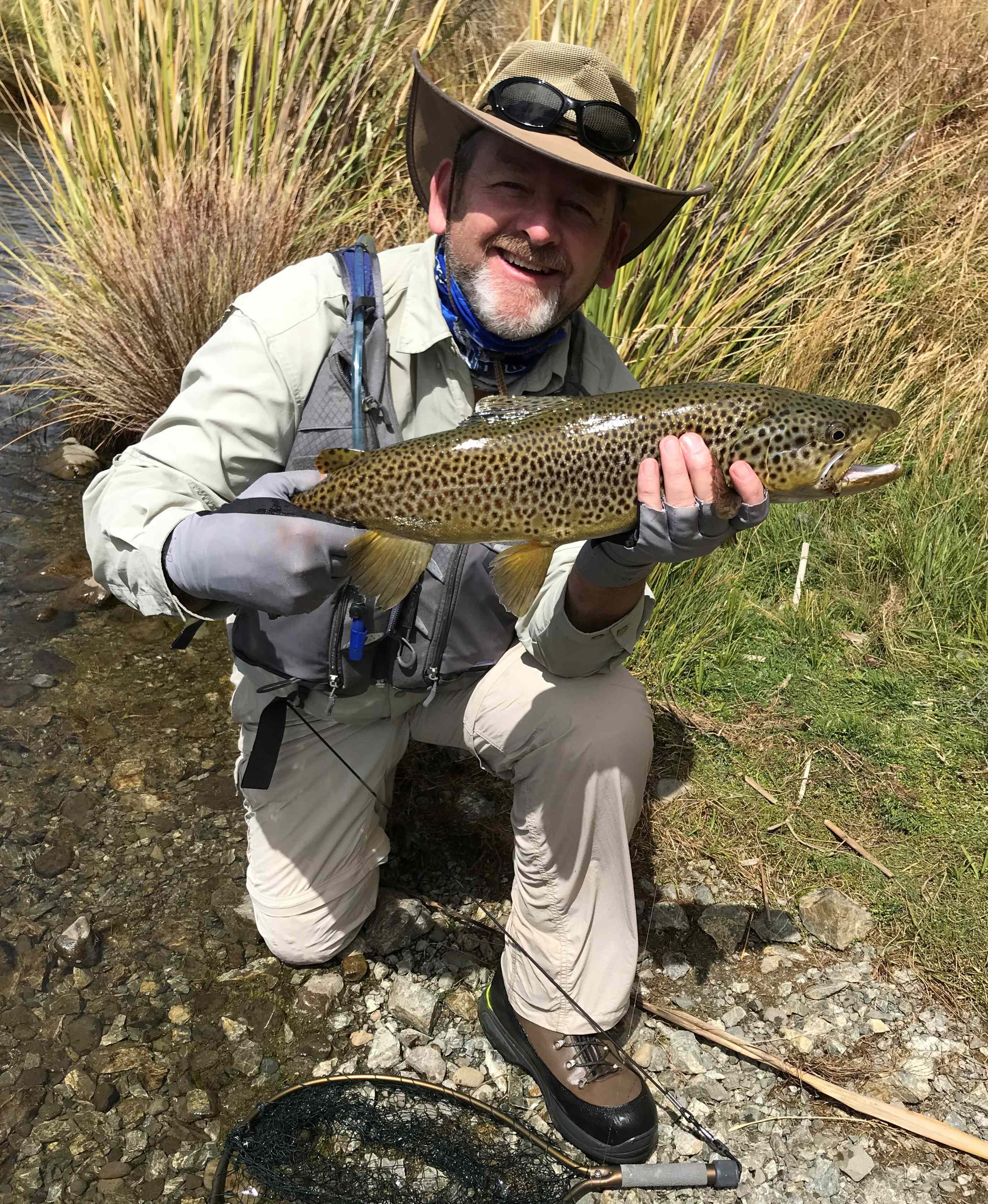 We are due for a southerly front to blast up the country tonight. In terms of rain it looks like the main divide may receive a meaningful rain event and the headwater of the Kakanui, Maerewhenua and Otematata river might get some heavy showers.

Elsewhere should only get a shower or two. Just to be cautious a quick check of the ECan river flows website could be worth it.

There may be some showers around on the weekend too but nothing substantial.

Above Right: Martin Stewart with his ripper brownie from Harrisons Bight, Lake Heron

All in all it is a positive outlook for fishing this weekend.

The hot weather we have been experiencing has been a mixed blessing, on one hand promoting the activity of prey items like cicadas but on the other heating up surface water past the comfort zone of trout and salmon.

The southerly flow over the weekend looks to be cold at times, good news for the fish and a heads-up for you to pack a couple of warm layers for your trip.

Its been a few years since I have done any mid-summer cicada fishing and I almost forgot why some anglers go out of their way to experience it.

Much like stags during the rutting season, trout go a little silly during a cicada hatch.

I got to experience this on a tiny spring creek tributary of a high-country braided river in the weekend.

In a single pool about the size of your living room I encountered seven rainbow trout.

A half decent cast of a classic Umpqua cicada pattern anywhere in the vicinity of the fish was attacked!

They even raced each other for my fly! One length testing cast intentionally landed well behind a fish but it spun around at the ‘plop’ and nailed it.

I managed to ‘horse’ the hooked fish to the back of the pool and cast to all seven fish and get each to take.

I only managed to set the hook on three fish, landing and releasing two.

Don’t delay if you want to experience some high-country cicada action this summer, autumn is just around the corner.

By coincidence, Martin Stewart sent me a pic of his ripper 5 lb brownie that he caught at Lake Heron on a cicada fly.

Martin has been visiting the lake for the last six years without luck but that changed this trip.

Good on ya Martin, perseverance often pays off.

If you’re up in the Mackenzie and up for a unique fishing challenge, then targeting sockeye salmon in streams and rivers may be a fleeting opportunity during late February.

You can fish for sockeye in the lakes year-round but targeting sockeye salmon in any river or stream in March and April is specifically prohibited.

Sockeye live in the lake as adults but run up the tributary streams to spawn from late February to mid-April.

Lake Benmore has been shown to hold a massive sockeye population.

In 2018 we undertook an intensive spawning survey of the Lake Benmore spawning population and estimated a run size of 32,000 sockeye.

Over the next month don’t be surprised to see large schools of fish pop up on your fish finder while fishing Lake Benmore, especially in the vicinity of river and stream mouths.

Back in spring we detailed an established method for boat anglers to target lake Benmore sockeye, here is a link to that article.

The crux of the method is to use small lures and get them deep enough.

Our work as Fish & Game Officers is varied and one cool part of our role is that we get to teach school kids about freshwater ecosystems. 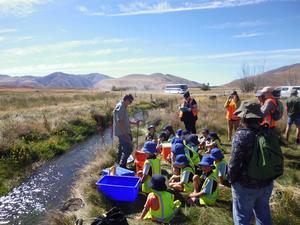 On Monday my colleagues Jayde and Hamish participated in a BioBlitz with Mt Somers Springburn School.

A BioBlitz is an intense period of biological surveying to record all the living species within a designated area.

The event was held in Lake Clearwater area and Jayde and Hamish used our electric fishing machine to help the students survey the fish populations.

They used fine mesh nets to sample the aquatic invertebrates in Lambies Stream, the outlet of Lake Clearwater.

They also found invertebrates including freshwater mussels, snails, worms and the larva of Dobsonfly, mayfly and caddisflies.

Environment Canterbury would like to inform anglers that helicopter spraying of riverbed gorse and broom weeds will be undertaken on parts of the South and North Ashburton River Branches and Taylors Stream over the next few days – weather dependent.

Licence holders and members of the public are welcome to attend our council meeting tonight (Thursday the 14th of February).

The meeting starts at 7:00pm and is held at the Fish & Game boardroom, 32 Richard Pearse Drive, Temuka.