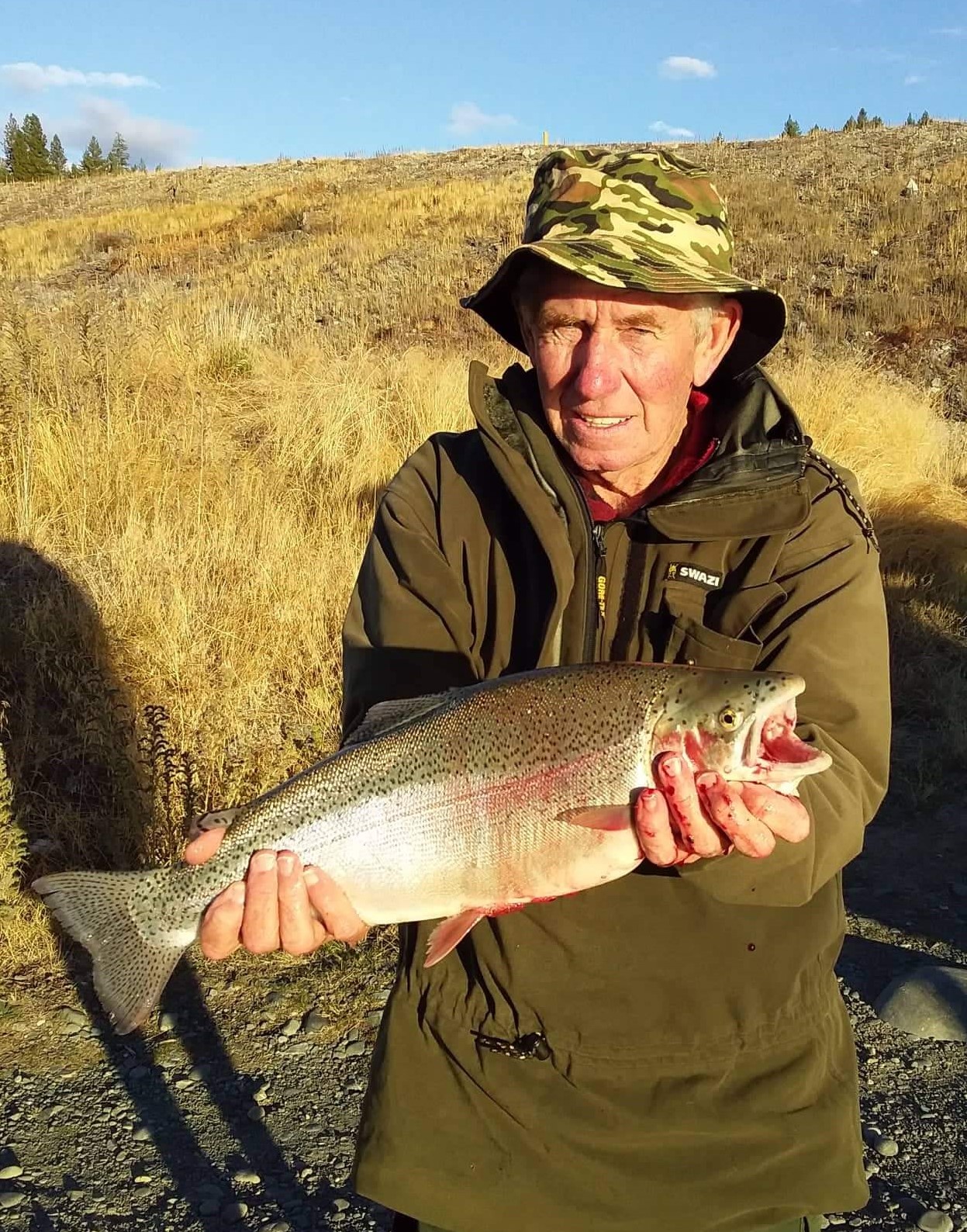 From the canals…Fish & Game ranger Allan 'Dizzy' Gillespie fished the canals this week with some luck.

He works on a casual basis at Timaru Hunting & Fishing, so thought he better learn the tricks to fishing the canals to share with customers and commandeered his workmate Shane to show him the ropes.

Allan said there was hardly anyone fishing, and he didn’t notice anyone else catch a fish.

Allan on the other hand, landed a nice rainbow by bouncing a 1/16th oz weight along the bottom with a purple booby fly trailing.

Allan checked a few licences at the Pukaki-Ohau A Canal too and said that all anglers were sticking to the rules.

I caught up with Fish & Game Councillor and keen Waitaki river angler Linn Koevoet to see how the sea-run salmon fishing has been on the Waitaki River this season.

The general news from Linn was that there hasn’t been much about and not many anglers chasing them.

Linn could confirm seven salmon catches this season and knew of another six rumoured to be caught.

Linn was fishing the river when I caught up with him on Wednesday after lunch.

He said he encountered five jet boats on the river while boating from the mouth to about 6km above State Highway One bridge.

News of the sea-run salmon fishing at the Opihi River came via keen angler and retailer Richard Davidson from Davo’s sports in Washdyke.

Richard reckons the lower river conditions are good and the mouth remains open for access, although it is starting to track to the north.

He would guess about 20 salmon have been taken from the Opihi this season, about eight of those in recent weeks.

I received an update from Linda Whipp, Mckinnons salmon hatchery volunteer, regarding the figures on the Rangitata South Camp weigh-in board.

Linda said there has been 62 salmon tallied for the season, including 12 caught in March.

One of the best days of the season was last Sunday, after a bump in flows, with six taken.

Considering the tally board only records part of the Rangitata River salmon catch, it would be fair to assume around 80-90 salmon have been caught for the season in total.

Sockeye salmon spawning is in full swing and there have been some interesting observations from spawning counts.

Last year at Larch Stream, a Lake Ohau tributary that is considered the historical key spawning ground of sockeye in New Zealand, we estimated that only 100 sockeye spawned.

This year when Fish & Game Officer Jayde Couper visited, he estimated that he encountered 8,500 spawners!

That’s easily the highest count since the sockeye population crashed in the 1980’s after the construction of the dam at the outlet of Lake Ohau.

Back in the 1970’s, before the crash, Larch stream used to get up to 18,000 spawning salmon returning annually.

Although back then the sockeye used to run right through from Lake Benmore, nowadays they're limited to only running from Lake Ohau and possibly from Lake Ruataniwha through the fish pass tunnel in the weir.

Jayde is still keen to hear of any sockeye sightings outside of the Twizel area, particularly in the Lake Ohau Catchment, the Ahuriri River Catchment and the Otematata River: jcouper@fishandgame.org.nz or 03 6158400.

The weather is a real mixed bag this weekend.

Sunday is looking like the best day for fishing, but it would be wise to keep an eye on river flows as there is region-wide rain forecast from Friday through Saturday morning.

In general waterway conditions are low and fishable but it's hard to predict how the weekend's rain will change that.

Any rain in the low country is welcome as some rivers like the Pareora and Tengawai are not much more than a trickle in places.

As a reminder, the ECan river flows website link can always be found at the bottom of the emailed report or alternatively click here.

Jet Boating NZ has notified Fish & Game that they hold permits for their members to jet boat the Ahuriri River for 16 or 17 March.

The permits say that jet boating is only allowed if river flows exceed 20 cumecs on ECan’s SH8 recorder on the day.