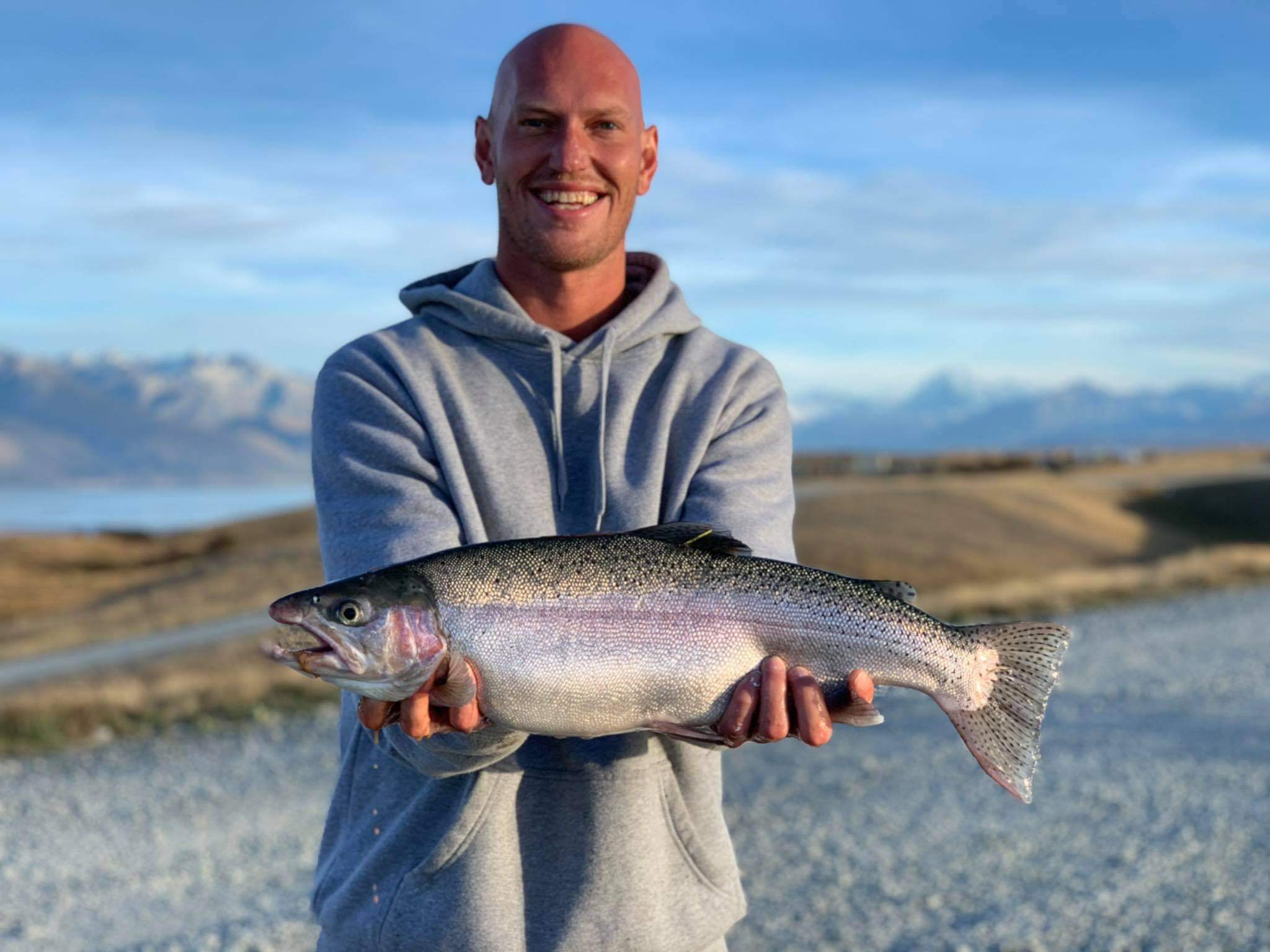 This week I have two tagged trout catch reports to share which also serves as a timely reminder for anglers to keep an eye out for tagged trout and to report the details to us at CSI Fish & Game, phone 03 6158400 or email csi@fishandgame.org.nz.

Whether you keep or release your tagged trout we are keen to know: unique four-digit tag number, place caught, length and weight.

Where could you catch a tagged trout currently in the CSI Region?

We have recently tagged and released hundreds of trout at the Tekapo Canal and a handful of trout in the Pukaki-Ohau A Canal and the Ohau C Canal.

Not too long ago we had a tagging project underway at Lake Alexandrina and the Waitaki/Hakataramea rivers.

Above: Elliot Gilchrist caught this tagged rainbow trout that doubled its weight in just seven months in the Tekapo Canal.

Last weekend Elliot Gilchrist caught a tagged trout in the Tekapo Canal at the salmon farms and its unique four-digit tag number revealed that it had been relocated from the Tekapo Spillway to the top end of the Tekapo Canal back on July 22, 2020 (the day the above YouTube video was filmed).

The unique aspect of this catch is the trout’s extreme growth experienced over the 220 days or approximately seven months between tagging and recapture.

To put that in perspective it was first measured as a mature adult trout of approximately three and a half pounds in July and was weighed at just shy of eight pounds and in great condition just seven months later — about doubling its weight.

All other tag reports from the Tekapo canal this year, mostly from the top end of the canals away from the salmon farms, had shown no evidence that the fish had grown.

So, what is the maximum size an adult trout originating from Lake Tekapo can reach in the Tekapo Canal after successfully migrating down the spillway?

Keep reporting your tagged fish catches and we might just find out.

Kevin anchored up his rowboat and fished a Mrs Simpson on a sinking fly line and caught a tagged five-pound brown trout that was in great condition.

Now, this catch is more unique because it shows that sometimes an adult fish doesn’t grow much at all.

It was 550mm long when we tagged it, I’d estimate that to be about five pounds.

Fast-forward 1,724 days or about 4.7 years and Kevin weighed it in at five pounds.

It practically hasn’t grown, although maintained good condition, and must be quite old.

It’s March now, the month to go sea-run salmon fishing at the Waitaki River, or, as local Glenavy angler and CSI Fish & Game Councillor Linn Koevoet says the best time to target the Waitaki’s sea-run salmon is the last 10 days in March.

I caught up with Linn this Wednesday to see how the salmon season is going down the Waitaki so far.

Linn said he knows of 6 sea-run salmon caught since January but said that the river has been too high and discoloured this week where he fishes in the lower reaches.

Linn reckons flows of over 350 cumecs will discolour the lower river even if it is clear up around Kurow.

While we have the chance, we are keen to collect some otolith and fin samples of angler caught sea-run salmon from the Waitaki River.

Linn Koevoet of Glenavy is happy freeze and store the samples so any successful anglers are asked to ring Linn to arrange a drop off time – phone 03 689 3883.

Please cut off the head and tail fin fresh and provide to Linn or freeze them down for later drop-off.

Alternatively, freeze them down and contact our Temuka office (03 6158400) to arrange later drop-off/collection.

Information to supply with the samples includes: angler contact details, date of catch, catch location, length, weight, whether it was fin-clipped or not and a photo of the fish (can be emailed).

We are saddened to report that John Wilkie passed away on February 27th.  John had a long involvement with Fish and Game serving 22 years as a Fish and Game Councillor.

John will long be remembered as a man of great integrity and mana.

He had such a positive outlook on life and fought hard for our waterways and freshwater species and habitat, including tuna (long-finned eel).

ECan is planning to undertake riverbed weed spraying for flood management through to mid-March at these rivers: Waitaki, Pukaki, Tekapo and Ohau.

Ever fished around the Tekapo Power Scheme and wondered what it looks like inside the power stations and how it all works to put a glow in your lightbulb…?

Genesis Energy is holding an open day on March 13 to show you around and teach you about the scheme.