It is great to be able to share exceptional catch reports this week from two weekly fishing report readers.

Hopefully, these photos give you some encouragement to head out fishing on ‘Waitangi Weekend’

Firstly, John Ferran sent in a pic of his local creek-trophy, not quite 10-pounds, but every bit a trophy.

Above Right: John Ferran and his biggest trout landed on fly from a creek in the Ashburton District.

John wanted to keep the location a secret, but he said it was from the Ashburton District, which makes the catch more special for him.

John said, “I managed to land my biggest trout on the fly last week. I estimate the fish to be between 8/9 lbs”.

John’s set up of choice was a size 16 hare and copper nymph fished below a dry fly.

The other great catch report may be a local record.

Nicor Sutherland recently caught what appears to be the biggest sockeye salmon ever caught and photographed in New Zealand.

Historical reports mention sockeye as long as 700mm but in extremely poor condition and others weighing up to 1.1kg. 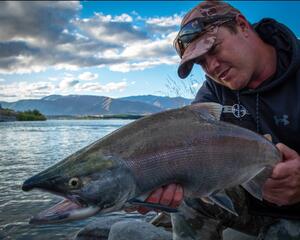 In recent years, CSI Fish & Game staff have counted thousands of sockeye on spawning surveys and measured a selection of carcasses. The longest we have measured is 455mm, estimated to be no heavier than 2.5 pounds.

Nicor caught his sockeye on a spoon lure at Lake Ruataniwha and said it went just-on 7 pounds.

After releasing the fish Nicor wondered if his catch had been feeding-up at the salmon farms.

If you catch a sockeye larger than 3 pounds or 500mm we would like to know about it.

Ultimately, we would like photos of the fish, its length and weigh measurements and ask that you freeze its head including gills for us to collect.

Sockeye can be tricky to identify from chinook salmon and trout so please read this ID tips article.

During February sockeye are getting ready to spawn and colour-up and anglers often encountered sockeye in large schools around the deltas of Waitaki lakes like the lower Ohau River on Lake Benmore.

They start their spawning run into tributary streams and rivers in late February and that provides a small window of opportunity to target them in flowing water.

No fishing for sockeye is allowed from 1 March to 30 April in any stream or river where sockeye salmon are present.

In lakes that are open all season, Like Lake Benmore, sockeye can be targeted all season.

It’s a dry looking forecast with relatively mild summer temps for the weekend.

Practically all rivers, streams and lakes will be fishable this weekend so go enjoy yourselves.

Rivers like the Ahuriri and Rangitata will be low and clear.

Although, as always, the hydro generated flows of the Waitaki remain unpredictable and its best to check the ECan flow website before you go and while you fish there.

And for more info on working around the flows and access points check out our Waitaki River Access Guide here.

The CSI “summer duck season” is open over the next two weekends 6-7 and 13-14 February.

Be sure to study up on the regulation guide here before heading out for a hunt.

Applications are open for the 2021 Opening Weekend hunting stand on wetland owned or managed by CSI Fish & Game.