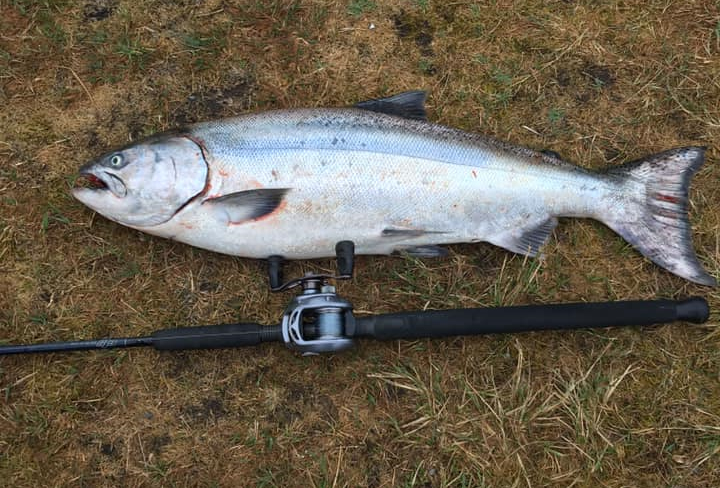 It is exciting to hear of the first two confirmed sea-run salmon catches for the season at the Rangitata River.

Like those salmon reported from further north at the Rakaia and Waimakariri the fish were silver bullets, in really good condition – the cream of the crop.

The Rangitata has been high and discoloured for most of the season so far, typical of springtime rain events in the main divide headwaters.

But recently, the river has cleared and now should provide good fishing opportunities between bumps in the flow.

On Wednesday we crossed the Rangitata River at the Arundel Bridge on the way back from completing electric fishing surveys at the Hinds River. 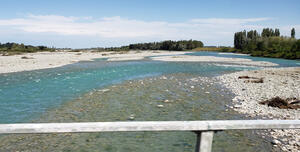 At 70 Cumecs on ECan Klondyke flow recorder the rivers clarity was good for spin fishing for trout and salmon, some may say a little too clear for salmon (see photo).

There are two wet and windy westerly fronts sets to hit the main divide this weekend so it will be worth keeping an eye on the Rangitata flows.

The same could be said about the Opening of the upper Ahuriri River and lagoons this Saturday, except that you will be fishing in the rough weather as well as dealing with any rise in flows.

As well as the unpredictability of the weather and flows for the Upper Ahuriri Opening, anglers will have no idea how busy it will be up there.

Traditionally its is a target for non-resident anglers but as our borders are closed, the numbers of those anglers will be down, with the question remaining - how many Kiwi anglers are going to fill their place?

Indications from licence sales are that there has been a resurgence in fishing activity by Kiwi’s early this season.

A rough rule of thumb for the Ahuriri River is that the river fishes best when flows at the SH8 flow recorder are below 25 Cumecs. 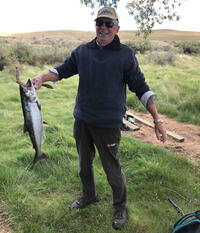 Thanks to Ron Braddick, who got in touch to share a report of his catch from Lake Alexandrina.

Ron was stoked to catch a 4-pound salmon and reported “Hooked at 11am, it took 20 minutes to net and secure in my dinghy”, “the trout are a bit on and off at the moment but good size, 4-6 pound.”

You may be thinking that a salmon catch in Lake Alexandrina isn’t possible, but we can confirm that there are a small number caught there most years.

They are occasional ‘upstream’ strays from our ‘put and take’ releases of female only stock into Lake Tekapo.

Ron’s catch is unique, in a way, as it is a “4-year-old” fish, being in its fourth year of life and destined to spawn and die close to its fourth birthday.

How do we know the age of Ron’s salmon, well the last salmon smolt release we did was from the 2017 spawning year.

Some Chinook salmon spawn and die nearing their second birthday but most spawn and die a year later as what we refer to as a three-year-old fish. 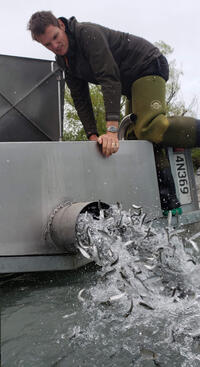 A few weeks back in November, CSI Fish & Game release 50,000 salmon smolt into Lake Tekapo to reinvigorate its ‘put and take’ salmon fishery.

The salmon smolt are a gift to anglers from Mount Cook Alpine Salmon, as part of their philosophy of giving back to the angling community.

Pencil in the spring and summer of 2022 to target these hard fighting fish as “three-year-old’s” in the 2-3 pound size class in Lake Tekapo.

Who knows, a few may even stray to “Lake Alex” and spice up your catch.

One final message to share is that our lowland rivers have received some nice top-ups in flow from recent rainfalls and they will have elevated but clear flows this weekend – a recipe for some awesome local fishing action!