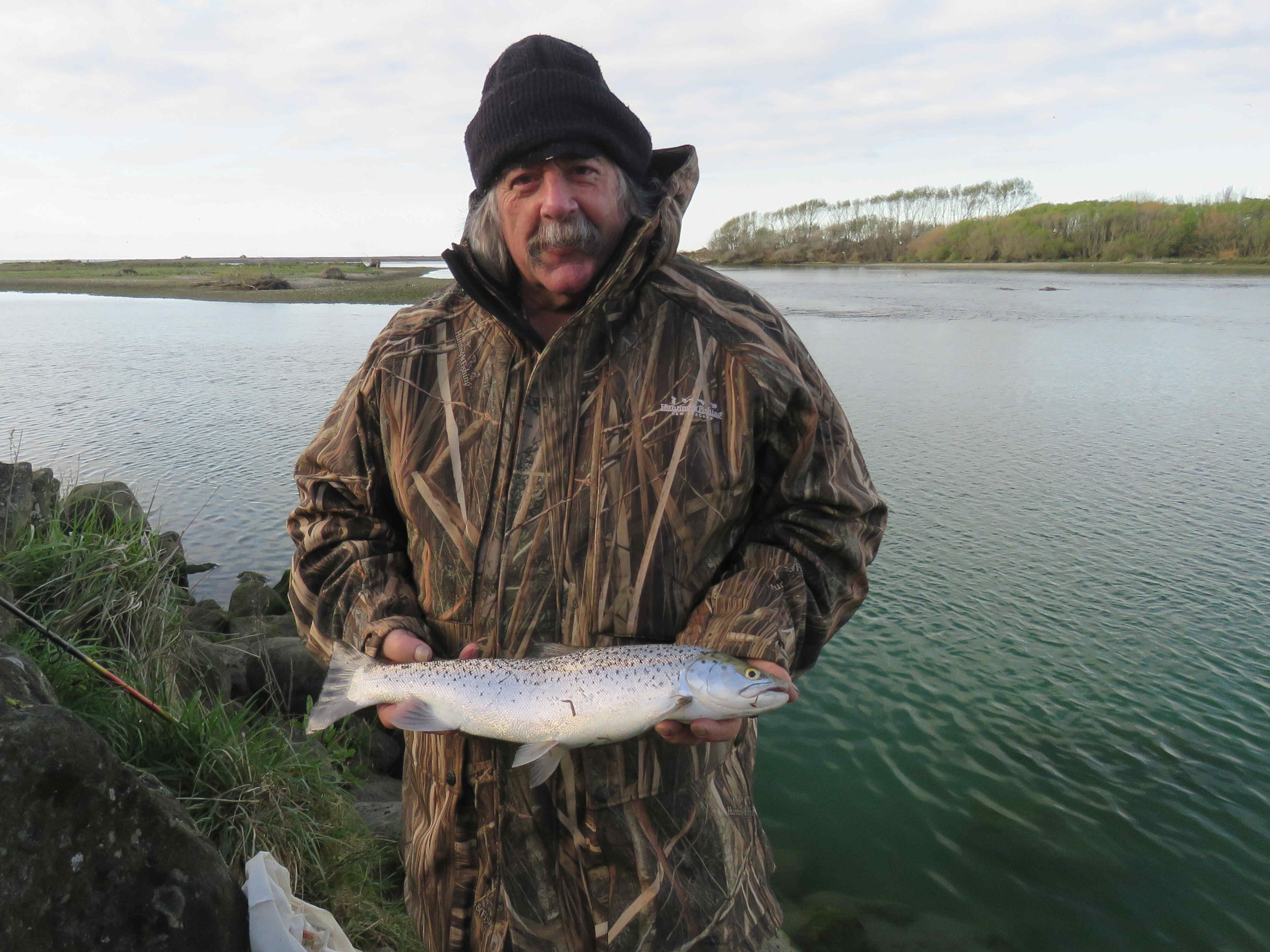 Well the season is underway and a fair few anglers have already tasted success.

For many, this weekend will be your first crack for 2019-20 and luckily for you some mixed bag weather from opening through to the weekend probably means there wasn’t too much activity on the waterways.

On opening day I was ranging on the lower Opihi River and bumped into a few anglers that were out enjoying the occasion.

Right: Ken Home caught this brownie on his second cast of the season at the Opihi Lagoon-Credit R Adams

Ten or so anglers fished the lagoon area in the morning and a few silver sea-run looking browns were landed and lost.

A scattering of anglers were to be found at most access points from Wareing Road through to Mill Road – not far from Pleasant Point. 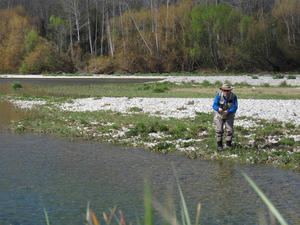 The river was low and at around 10 cumecs presented clear water sight fishing for what angler have become accustomed to on the Opihi, about 3-10 fish in every good pool.

The Opihi doesn’t give up its fish too easy though and an angler shouldn’t expect to catch many; generally, you’re doing well to land one fish per pool, as was the case on opening day.

I always enjoy having a yarn with the anglers on opening day and getting their 10 cents on the state of affairs.

One angler had returned from ill health and was stoked just to have the opportunity for a cast, another had the week off work and was giving it 110%, another told me not to mention the Opihi in the report, sorry mate…

My colleagues Hamish, Jayde and Richie were ranging up at Lake Opuha and they report that the lake remains the hub of opening day activities in the region.

They checked about 50 anglers from boat and lake shore for the morning, most of whom had hooked one or three fish.

Although it was snowing first thing, most of the anglers where dressed appropriately and stoked on the day. 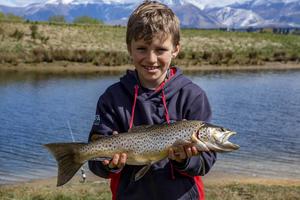 Brown trout were in good numbers and a few good rainbows made it to the chilli bin.

Anything over 3-pound was considered a large fish.

The lake is relatively low for this time of year and there is some good shoreline access with the ranging crew spotting some cruising fishing while walking the banks.

Ranger-in-training Stephen Newberry fished opening morning on the Waitaki with a couple of mates.

They have been doing a similar trip for 30 odd years, launching a jet boat at Kurow and parking up on a few of the braid islands in the area.

Stephen is forced to spin fish to remain competitive with his mates; they reckon flyfishing is too easy on the Waitaki.

Stephen used a black and gold soft plastic this year to good effect.

Stephen rated opening this year “pretty good” and “above average” considering the years since didymo struck.

They landed over 30 fish between three anglers for the morning and lost nearly as many, harvesting one or two each of the best.

Stephen said it wasn’t a busy opening at Kurow, about 10 trailers at the boat ramp and not a lot of shoreline anglers encountered.

The Waitaki was flowing at about 340 cumecs on opening.

Looking forward to the weekend, the river conditions are mostly good although I’m not sure on the clarity of the Ashburton.

I’d be keen to hear from one of you how the Ashburton River is fishing this season (radams@fishandgame.org.nz).

There is a cold and wet southerly front set to rip through the South Island on Saturday bringing a short and sharp dousing of rain to pretty much everywhere.

There might not be enough in it to put the rivers up too high, so I’d stay optimistic and keep an eye on the ECan flow website.

Sunday is looking like a great day for fishing!

Here is the link to the ECan flow page.

Finally in this report, Hamish Stevens and I featured on the Graeme Sinclair’s TV show Ocean Bounty on last Sunday afternoon.

If your interested to see the show which investigates the sustainable management of the canals, both commercially and recreationally, then you can sign up and watch it on ThreeNow (on demand).

Hamish and I discuss the nature of the fishery and some of our management considerations.

One thing the show doesn’t mention is that it was filmed a short time after the huge escape of salmon into the Ohau C Canal that hit the media during the winter of 2019.

During that time salmon catch rates were exceptional.

Check out episode 3, season 3 of Ocean Bounty on TV3 three now website here is the link