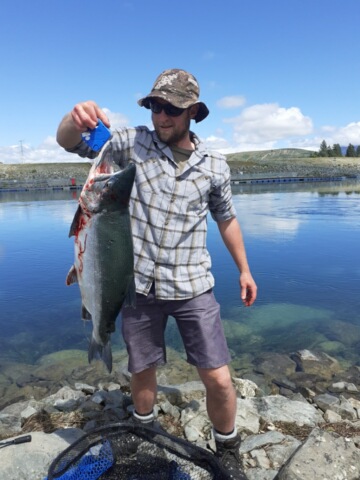 The canals have produced another potential world record sports fish!

A catch like this would make the news in Alaska; in fact, it probably will.

Geoff had initially thought his catch was a rainbow trout with its dark back colouration. Still, after sharing a photo of his catch on Facebook, he received messages informing him of the identity of his fish and that it could be a world record.

Geoff said the fight was unlike a rainbow or Chinook salmon’s — it did three medium size runs, surfaced once and then dove deep and tried to bury its head in the rocks and weed — about a 10-minute battle. 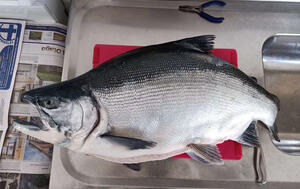 This super-sized sockeye catch comes nearly a year after several massive sockeye salmon were caught in the same area.

The XL sockeye caught last season were about 5 – 10-pounds, so I wonder if Geoff’s catch is from the same group of fish that didn’t spawn last year and now are about 10-pounds bigger…

Could we see a 20-pound sockeye caught this February?

Geoff is thinking about applying for the world record and will have to get all the paperwork sorted within the limited timeframes.

This is an iconic fishery, with scenery matching the fishing as an attraction.

Let’s hope the weather plays ball, but as I write this on Tuesday, there is a nasty wet front forecast to hit the alps on Friday and over the weekend.

Be sure to check the weather forecast before heading out this weekend.

The ECan website has a rain gauge in the Ahuriri valley, river flow gauges in the middle and lower sections of the river.

Last weekend we received region-wide rainfall, so it is well worth checking out the ECan river flows website before your trip this weekend to see how flows have abated.

There could be some great opportunities to fish those lowland rivers and streams as they drop back in flow.

The Opihi River was still high and discoloured on Tuesday afternoon, but other tributaries were coming right.

The weather forecast is half-decent for the Canterbury Plains this weekend – at this stage. 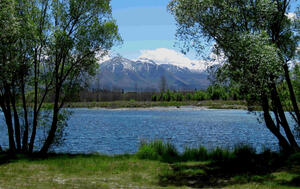 Finally, in this report, an idea for a fishing spot this December – Lake Poaka near Twizel.

Fish & Game, DOC and ECan have put considerable efforts to knock back the smothering riparian vegetation here over the past few years.

The key benefit of the vegetation control project for anglers is that it has made room to access the shoreline and to have room for a backcast. There are also other ecological benefits for birds and fish and recreational benefits for campers and the likes.

On a recent visit, I saw several medium to large trout cruising the shallow margins of the lake – and not an angler in sight.

The gaps between the trees around the camping area and small peninsulas held opportunities for sight fishing.

The Twizel River delta area would be a great spot to scout out in the daytime with some sight fishing on offer and then be well worth visiting after dark to swing a woolly bugger or lumo fly.

Tekapo River flows may rise rapidly during spilling, and all river users are urged to take extreme caution to avoid rising river flows.

Tekapo River flows in the lower river, downstream of the Mary Burn confluence can be view on the ECan website here.”

Waitaki River flows at Kurow can be viewed at the ECan website here.

The Annual Public Meeting of the Central South Island Fish and Game Council will be held on Thursday 9th December at 7:30 pm at Council's Boardroom, 32 Richard Pearse Drive, Temuka.

Licence holders are welcome to attend.  Please be advised that at both the Council and Annual Public meetings masks must be worn in Council’s building and 1-metre distancing rule will apply.  CSI Council will be adhering to the rules stipulated under the Orange Covid Traffic Light system.

The Draft Sports Fish and Game Management Plan for the Central South Island Region was publicly notified on 16 October.

The Draft Plan, public notice and submission form can be found here.