Want to catch a fish in winter? Head to the hydro canals!

The popularity of the Mackenzie Basin’s hydro canals for fishing continues to soar, with a new survey showing anglers putting in over 40 thousand fishery visits there last season.

And they are tasting success, with the survey showing that on average 122 fish are caught in the canals every single day.

Above Right: Anton Nally, with 18 pound brown on Pukaki-Ohau Canal.

Following a NIWA survey that showed that the hydro canals were the most popular freshwater fishery in New Zealand, Central South Island Fish & Game conducted the survey to get the full picture of what was happening in the canals.

This was done to help it make the right decisions to sustainably manage the fishery.

The survey showed that anglers made around 43,800 daytime visits to the canal fishery during the 2015-2016 season.

They caught approximately 44,500 sports fish. Because of the size restrictions for salmon, nearly half of these fish were returned to grow bigger but 23,400 of them were large enough to be harvested for dinner.

However because anglers were only counted during daylight hours, the results are likely to underestimate the true total use of the fishery as night time is often a productive time to catch fish in the canal system. 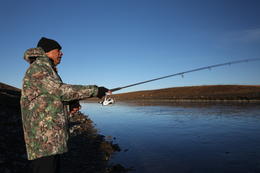 The survey saw anglers counted and interviewed during the 2015-2016 sports fishing season.

A follow-up phone survey allowed Fish & Game to ascertain what the anglers caught.

One of the surprising results was the number of trophy fish being landed by anglers.

When they were asked to estimate the weight of every fish caught, rainbow trout had the most impressive seasonal catch figures.  Of rainbows landed, 29% or roughly 2,900 fish were of ‘trophy’ size of between 10 and 20 pounds.  Nine percent or 940 rainbow trout ‘exceptionally large’ size – 20 or more pounds in weight.

For both salmon and brown trout, only about one percent of the catch was exceptionally large, while 17% of brown trout and 6% of salmon caught weighed between 10 and 20 pounds.

These catches mean the Makenzie hydro canals are fast building a reputation for the size of the trout and salmon being caught there.

The majority of brown and rainbow trout resident in the canals began life in the headwater tributaries to upstream lakes and migrate downstream through the lakes and into the canals. 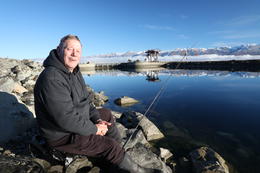 Once in the canals, they grow to world record sizes by receiving a ‘free feed’ of fish food pellets meant for the salmon being raised in the canals’ fish farms.

The survey showed anglers come from all over New Zealand to try and hook a monster trout, although most were from the two Canterbury Fish & Game Regions, Central South Island and North Canterbury.

Thousands of North Islanders were prepared to make the trip down to the Mackenzie trout mecca and they make up ten percent of anglers.

Only about two percent of anglers were from overseas.

Bait fishing was the most popular method of catching fish, and it was also the most productive with scented soft baits or crustaceans like shrimp and prawn accounting for the most fish.

Very few anglers fly fished but those that did caught more fish for less effort than bait or spin fishers.

“These fish get everything thrown at them so they are very discerning, you really have to bring your A-Game to tempt them!

“However salmon are easier to catch when there has been a breakout from the salmon farms.”

“But when you do catch a trout or salmon, there is about a 15 percent chance that it will be a large fish above 10 pounds in weight,” Mr Adams says. 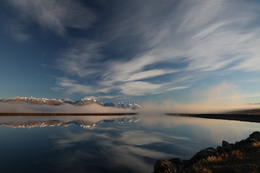 “If it is a trout, the odds get even better with almost a third of all brown and rainbow trout caught being in trophy  class.”

Left: You can't beat the scenery of the Mackenzie Basin.

“No other New Zealand freshwater fishery can match this and is able to produce such exceptionally large fish,” he says.

“We need to do everything we can to look after it and this survey will help us sustainably manage this magnificent angling destination.”

You can watch a video on the Canal fishery here.

You can read the full report here.

Posted in Fishing; Posted 6 years ago by Richie Cosgrove