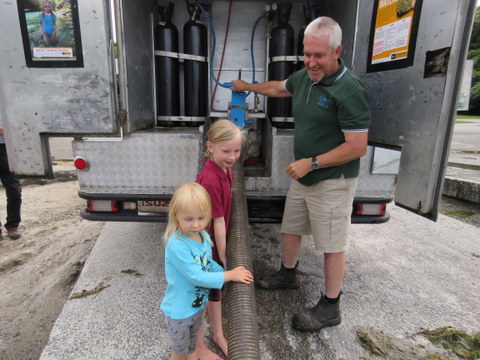 So far more than five thousand  yearling trout have been released into lakes Tarawera, Rotoiti and Okataina. Thousands more will be released in April and May.

Fish & Game officer Mark Sherburn says fish are liberated at different times through the year and their fins clipped to a certain pattern for identification and tracking, “via the surveys we run of anglers’ catches.”

Most of the fish let go this year will return to their release locations in the winter of 2019 providing action for shore-based fishers during each winter season, he says.

Up until that time they will be caught by anglers using boating methods such as trolling and jigging.

Eastern Fish & Game raises around 100,000 rainbow trout annually to keep the Rotorua lakes, and others around the North Island, stocked up for anglers.

A Lake Tarawera spawning stream provides quality parent fish for the hatchery’s annual production. Parents are selected for their size and quality.