Please send us your duck details

Fish & Game officers have made an urgent appeal for game bird hunters to send in any duck band information they have – after a “disappointingly slow” response to the annual call for returns. 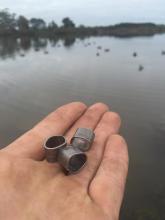 Senior Fish & Game Officer Matthew McDougall says the return of band details has been unusually poor for this time of year.

Mallard ducks are trapped and banded at various locations in summer and hunters are asked to send in details of any banded birds they bag, including the band number and where it was harvested.

“Normally by this time we would have received details on ten to 18% of those birds we banded in January, and about three percent of the bands from the previous year (January 2014).

“But this year only nine percent of birds banded in January have been recovered and reported, so we’re not sure what’s going on.”

Mr Mc Dougall says Fish & Game needs to take a closer look at the data to see if they can fathom this shortfall.

“We are very keen to hear from hunters who have bands lying around that have not been reported yet."

Mr McDougall says hunters are reminded that under the Banding Together promotion by Hunting and Fishing New Zealand they can go in the draw to win one of five Shearwater camo hunting jackets.

“We appreciate Hunting & Fishing’s ongoing support, and remind hunters that the deadline to go in the draw is 31 August 2015. In a rather cold winter these jackets are an appealing article of clothing up for grabs – for only a small amount of effort.”

“We have thrown our support behind the banding programme a couple of years running because we are well aware of the potential benefits for all.

"It’s vital that we all play our part in the mallard research – Fish & Game has earmarked hundreds of thousands of dollars to research that is well underway, so it’s not a lot to ask that we as hunters, all contribute in this small way.”

Mr McDougall says the banding helps Fish & Game determine productivity, population sizes, movement, and not least, survival rates for both adults and juveniles of both sexes.

He reminds hunters they don’t need the band itself, just the number on it and one or two other details like where and when you shot the bird.

Hunting & Fishing New Zealand has donated five of its Matuku Camo’ Shearwater Gen II waterfowling jackets as prizes for the season which began May 2, 2015. Hunters who return their band details by August 31, 2015, go in the draw to win one.