The unknown impacts of catch & release 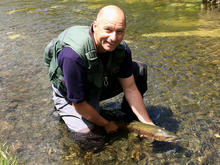 It seems that catch and release has become the norm for most trout anglers in NZ.  Many people are highly critical of those who like to take fish for the table - one guide told me he would refuse to take any client who wanted to do the same. Most of my fellow fishers adhere to the mantra of “catch and release, not catch and decease.” We seem to unquestioningly accept that catch and release is a good thing in maintaining a healthy fishery.  There is plenty of advice out there on how to play, land, handle and release a fish to maximise its chance of survival, including on the Fish & Game web site.

And of course we have the 1999 Cawthron Institute’s ‘Catch and Release: a review of overseas research and implications for New Zealand’ (Roger Young 1999).  This, along with some observations undertaken by Cawthron’s Dr John Hayes in the Crow River, Kahurangi, is one of the few pieces of work on the subject of catch and release that touches on the effects over and beyond the physiological impacts and survivability. I have reproduced a paragraph of this review paper below:

In New Zealand, Jellyman & Graynoth (1994) reported on the results of a questionnaire sent to experienced guides and anglers. Of 35 replies, 23 respondents had noticed a change in the behaviour of trout during the years they had been fishing. Some anglers considered that trout occupied traditional feeding spots less often and mainly at times when feeding was most profitable (Jellyman & Graynoth 1994).

Decreases in the susceptibility of trout to anglers over the duration of the fishing season were also reported although it was not possible to remove the effects of temperature from the effects of angling pressure. Ten of the anglers considered that the settling down period for trout after being disturbed had increased, while 18 anglers thought that there had been no change. A recent experiment that we conducted on brown trout behaviour in a remote river in Kahurangi National Park showed that trout responded to fishing pressure by hiding more and becoming more difficult to catch (Young & Hayes unpublished data).

The paper concludes that a lot more study is needed in this area if we are to have effective fishery management in NZ.  There are numerous anecdotal observations, particularly for large brown trout, of fish being increasingly harder to catch as the season progresses but little scientific analysis as to how much is the result of fish being repeatedly caught, handled and released.  After all, it has taken over ten years for Fish & Game to finally introduce some sensible additions to the regulations on fishing etiquette. They include suggesting that, if practicing catch and release, to limit yourself to catching no more than six fish per day (chance would be a fine thing in most South Island back country fisheries these days).

Survivability and fish behaviour are two important issues for anglers, the latter being more researched than the former. Another element of catch and release that has had even less attention than fish behaviour is the impact on genetic vigour of the stock. Large jack (male) trout tend to dominate the headwaters of most fisheries, presumably so they spend the least effort encountering the most hens (females) come spawning season and these are the fish that if caught, will invariably be released on the basis of them being trophy quality and hence too precious to kill.

But, as with all animals, as they grow old their fecundity (reproductive capacity) decreases.  So, might we unwittingly be assisting sub-optimal breeding jacks maintain the principle spawning positions by releasing them back to their lair and so denying the younger, more vigorous jacks from taking up the prime spawning positions?  A bit like giving only grandfathers access to a dating agency.

The Cawthron review also touched on ‘density dependent populations’ – where the biomass of a species is limited by its environment in terms of food, space, competition, shelter, for example.  Generally, in such a system there is either a higher number of smaller animals or a smaller number of larger animals. Catch and release in a reproducing stock of fish can, all things being equal, increase the overall fish population but at a cost of the average size fish being smaller – the antithesis of why many anglers go fishing in back country fisheries in the first place!

The whole issue of catch and release would benefit from more scientific evaluation of the impacts and less from the current assumption that it is a “good thing”.

Have a happy Christmas, tight lines and see you all in the New Year