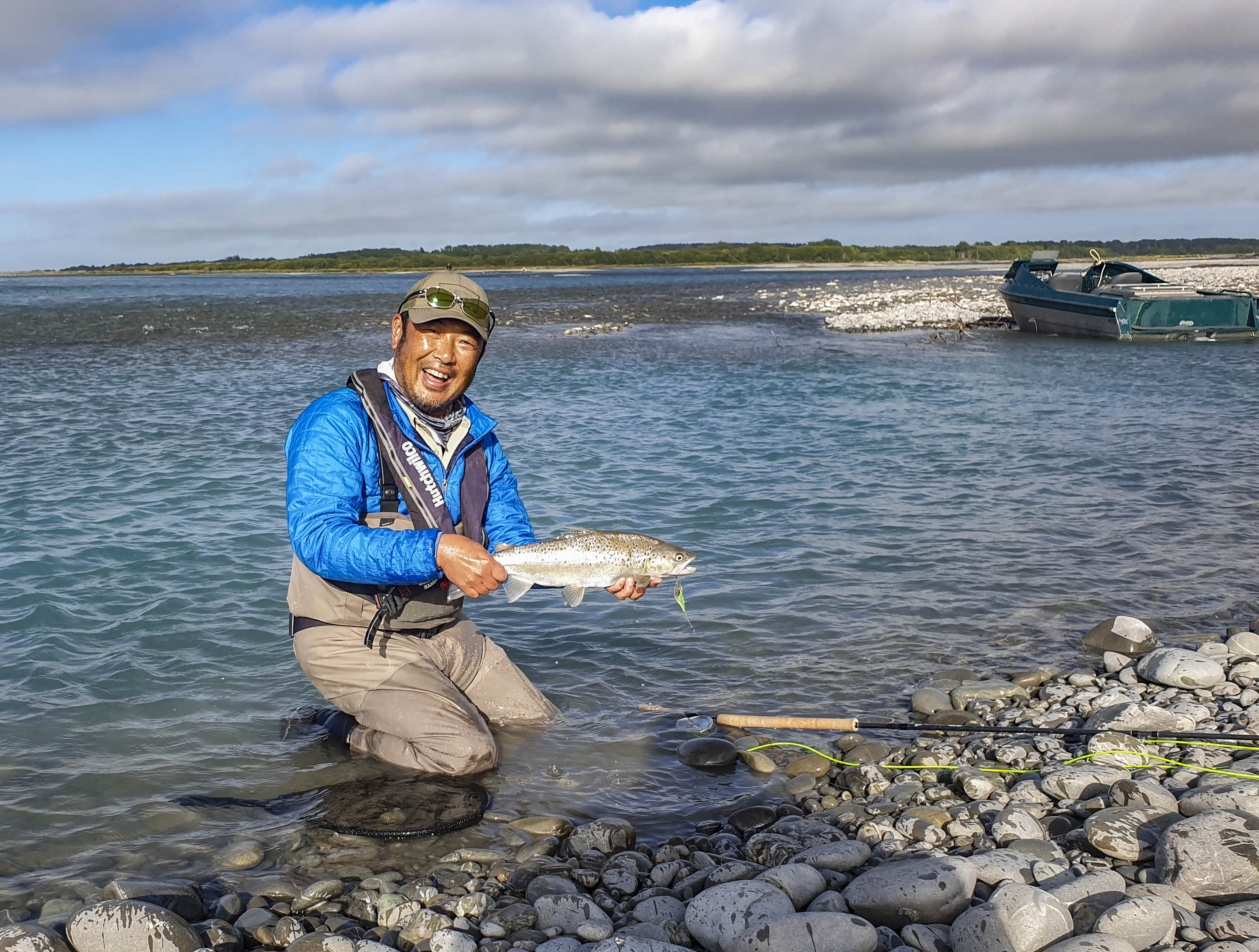 The prospects for fishing over the next week look great, with variable light winds across the region.

A small system is approaching the West Coast from the Tasman, however this is unlikely to spill over the alps into our headwaters.

The main rivers had a small fresh last weekend following rain in the alps, but they are dropping quickly and will be in ideal condition for salmon fishing over the next few days, with no further rain forecast.

Before the recent freshes, salmon were being caught in the lower reaches of the Rakaia and Waimakariri rivers and word of this has spread with an increasing number of anglers out fishing.

Above: Kunio Onishi with a excellent Rakaia River estuarine trout.

A number of these salmon have been some of the best conditioned fish seen in recent years, with a number weighing just under the magic 20 pound mark.

The lower reaches of the Rakaia had been the preferred area to fish, although salmon have been caught right through to the gorge and this recent fresh will have provided the salmon ample incentive to move further upstream.

There seems to be quite a bit of talk amongst the dedicated salmon anglers that this has been one of the better starts to a salmon fishing season seen for many years.

I hope all this activity continues and develops into a bumper season, something we haven’t seen in recent years.

We have heard very little from the Hurunui or Waiau rivers, but with reports of salmon in most of the east coast rivers at present, I imagine there will be a few salmon entering these rivers as well.

The salmon are generally larger and in better condition than last years indicating good food sources at sea, which is welcomed by anglers.

Spin fishing a Veltec, Toby or Rapala spinner can produce good results in the upriver reaches of these main rivers and they are just as successful in the larger lakes, allowing anglers to cast reasonable distance into deeper water where rainbows and landlocked salmon reside.

This is also an easier option than fly fishing in strong winds, something I am sure we will get at some point over the festive season.

The Lower Waimakariri River would also be worth over the break and anglers should again use either a thread line and spinner fished deep, or a sinking fly line with a Hope silvery to imitate whitebait, and for those anglers after a table fish, Kahawai also appear to be present in good numbers at present.

Similar methods should also work in the South Branch of the Waimakariri below Dickies Road.

Good luck for the weekend and best wishes for the festive season.