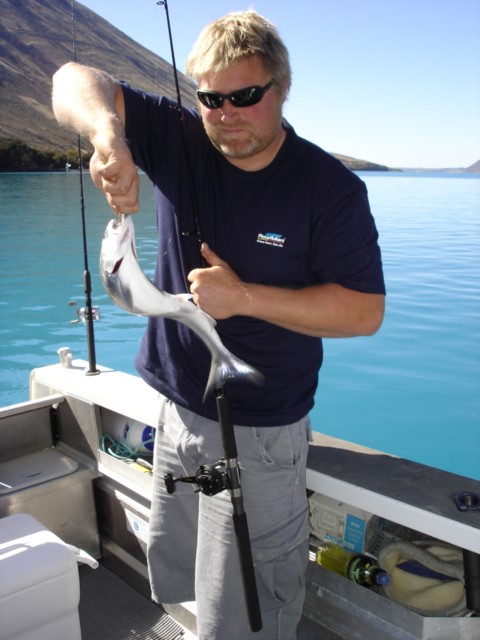 The last week has been a relatively positive week for salmon anglers in the region.

Although the salmon fishery is not experiencing the returns seen in the nineties, anglers are more optimistic than they've been for a few years.

Above right:Thomas Moffett with a nice Lake Coleridge Salmon.

Reasonable numbers were caught in the lower Waimakariri River, with McIntosh’s the favored spot.

The Rakaia, Hurunui and Waiau rivers have also seen a few salmon caught over the last week.

The next few weeks should see the peak of the Waimakariri salmon fishing so make the most of this period.

A nor-wester in the alps is likely to bring the rivers down dirty this weekend, but this will encourage salmon to run the rivers as they clear.

When the rivers do come down with a bit of colour, the tail end of the fresh is usually a good time to target salmon, with things generally quietening off as flows recede and waters become clear at this time of year.

The forecast doesn't look good for the high country on Friday and Saturday, but the wind and rain is expected to ease Saturday and be clear by Sunday.

Anglers should make the most of any good weather as we should still get some great fishing in the high country lakes, especially Lake Coleridge over the next few weeks, with the fishing season closing in most places at the end of April.

As well as promoting the catching of salmon, the recently formed National Sea-Run Salmon Committee is looking at ways to reduce salmon harvest in the future, which will not find favour with all anglers.

Our science suggests we’re potentially over-harvesting returning adult salmon, which may reduce the viability of the population long-term.

To reduce harvest, our council will be considering a number of options and we will keep you updated on this process.

The two monster rainbows (Walter and Jill)  released into Lake Georgina on Waitangi Day, have yet to be caught.

For the lucky angler that lands either one of these fish there are some fantastic prizes from Hunting & Fishing Tower Junction, for the person that presents the tag at the North Canterbury Fish & Game office.

We have only heard of anglers that have lost these fish so they are still out there, lurking in the depths!

The second part of the annual chinook salmon smolt fin clipping program will commence at the Montrose hatchery at 8.30 am Saturday 6th and Sunday 7th of April and will probably involve two partial days clipping finishing around  2pm with a good team both days.

Numbers of club members needed to complete this task on this weekend are 40 volunteers on both days.

Fish and Game rangers and council members are also invited to take part over the weekend.

The next North Canterbury Fish & Game Council meeting is next Wednesday, March 20, start time is 6.30pm all welcome to attend.