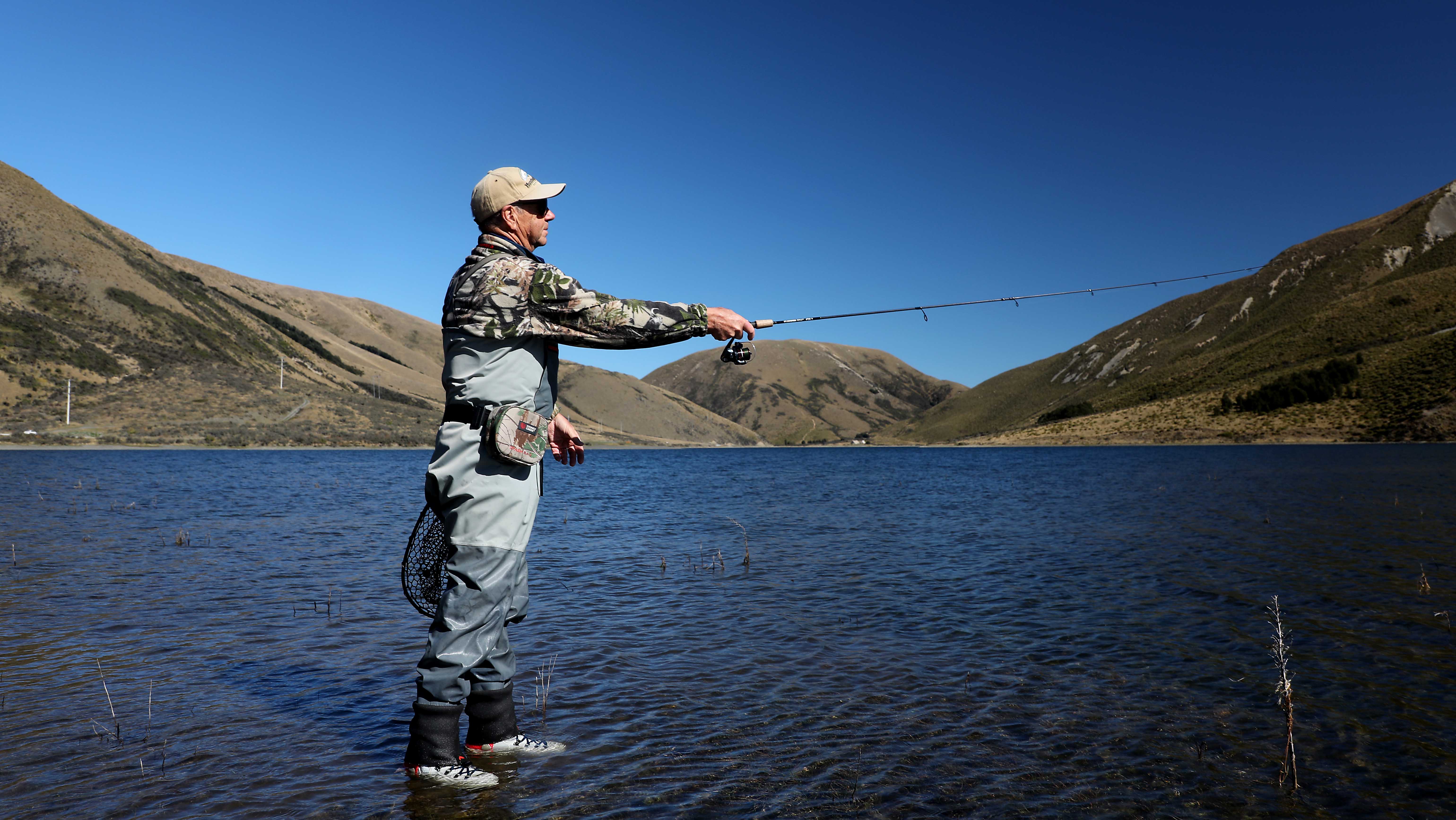 There have been only limited opportunities for salmon anglers over the last week and as such, reports of success are again minimal.

Above Right: Christchurch Angler Kevin Williams enjoys a days fishing at Lake Lyndon, Williams visits Lakes Lyndon and Pearson on a weekly basis as they are only an hour from Christchurch they are such an easy trip. Williams efforts were rewarded with two nice rainbow trout before lunchtime.

With the recent rain and lift in flows last week, salmon will be on the move heading for their spawning streams and the main rivers are all well worth a look, especially on the receding flows following this small fresh.

In the Waimakariri, Macintosh’s Rocks and the Banana Hole should still produce a few salmon when conditions allow.

A friendly reminder to anglers also, please remember, there is no salmon fishing in the Western Zone of our rivers above the white posts, as we have had reports of this occurring recently.

The weather for the weekend looks very average with northerly winds and rain in the alps, which will limit opportunities for lake and back country fishing.

Tomorrow morning is the best bet for anglers wishing to head into the high country and one option worth thinking about is salmon Lake Coleridge, as salmon are starting to think about spawning and are often caught either near the mouth of the Ryton River or trolling around Ryton Bay.

Most anglers have packed their fishing gear away until next season (many of whom are eagerly awaiting opening day of the gamebird season on Saturday 5th May), however for those keen anglers that cannot wait until next season, there are a number of rivers open all year in the Eastern Zone.

Please check your regulation booklet,  or the North Canterbury Fish & Game website for regulations on these waters https://fishandgame.org.nz/assets/Uploads/Anglers-Notice-2017-North-Canterbury2.pdf

Anglers will note in the Regulations book for North Canterbury that after May in some sections of rivers there is a zero limit, this means you can fish but you cannot take the fish.

North Canterbury Fish & Game bought in this regulation change after submissions from a number of anglers who were wanting to winter fish rivers but did not want to harvest the fish.

Above all, always check the regulations for the waterway you are going to fish in as they will differ.

This winter season offers a special opportunity for anglers keen to brave the elements on these high country lakes.

Winter fishing is often overlooked by anglers, but this is a great time to head into the high country to fish, with snow-capped alps in the background, calmer weather and the low number of anglers about at this time of year, there can be some very enjoyable days out, but make sure you dress warm!

The most popular spot in the region is LakeColeridge which has fished well during the winter months in recent years.

Later in the winter season, salmon fishing usually really fires up with some weighing up to five pounds caught in recent seasons, which is relatively large for Lake Coleridge.

There are also a few large rainbow trout in the lake with a number of 5-6 pound rainbow caught each season and the odd fish up to 8 pounds which is well above average for this lake.

It is also not uncommon for experienced anglers fishing Lake Selfe to catch and release many trout on some calm winter days.

Decent trout have also been spotted in Lake Roto Kohatu on the outskirts of Christchurch, Fish & Game is keen to see some results from anglers who have success from this little known waterway.

Good luck if you are heading out for a fish over the weekend.