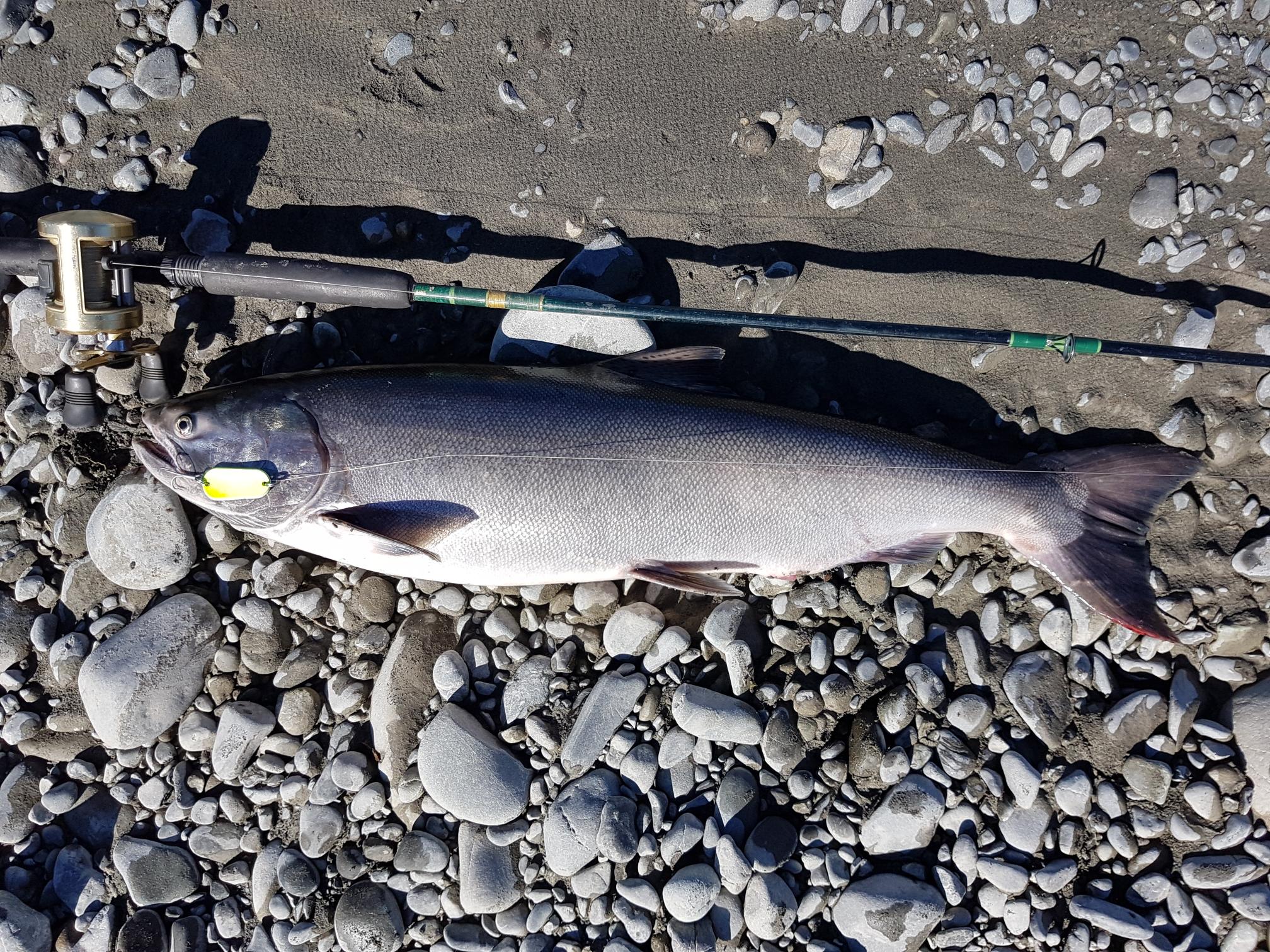 Dear Anglers, This report has been written a couple of days in advance of the weekend as field work has kept us out of range for the later part of the week.

At the time of writing over 100 mm of rain has fallen in the Alps and the rivers are on the rise.

Above Right: A salmon caught on a lime green zeddy.

With that amount of rain it is hard to imagine that our main catchments will be fishable by Good Friday.

Maybe late in the weekend is a possibility however more rain is forecast in the headwaters on Saturday.

With the long weekend approaching angling prospects may be better  targeted at lake trout fishing, or even land locked salmon in lake Coleridge, this lake can fish very well late in the season.

The month of April can produce some very good results on landlocked salmon and also rainbow trout.

Trolling from a boat with perch rapalas, or just a plain silver 10 gram toby are my favourites for this method.

For shore based anglers use soft baits or silver or black lures like small ticers up to 20 grams, and cast into the deep drop off margin.

Early before the sun hits the water is best, or fish from dusk and on into the night can be very productive.

Salmon will be starting to congregate around the in-flowing streams soon if not now.

With fishable water there are still good prospects of catching a sea run salmon.

It has been quiet at the mouths recently, but there has been some good reports of salmon success in the mid reaches of the Waimakariri river especially.

We keep hoping that the run is late! April has been a good month in the past, especially on the Waimakariri, however that normally happens after a good March.

Climatically conditions have been unusual this season, is this having an effect on our salmon at sea?

So many adverse factors have been proven to be to the detriment of salmon populations around the world, are current warming sea temperatures are something relatively new to us.

What effect is this having on salmon in NZ, and will they adapt if this is a long term trend?

Lets hope that this summer is not something that we are going to have to get used to. 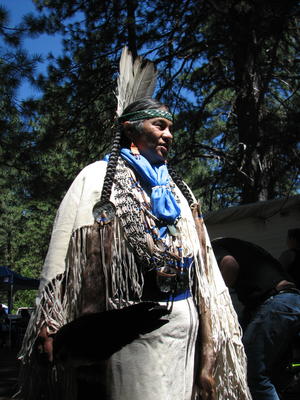 Over 100 years ago a Winnemem Wintu tribesman accompanied the first shipments of chinook salmon ova to New Zealand.

The ova came from the Baird Hatchery based on the McCloud River in the upper Sacramento catchment in California.

As a result of that and decades of smolt releases and ova planting around the South Island acclimatisation of the species was achieved.

Back in the United States some 50 years later, a dam was constructed on the McCloud River and the  salmon run was completely severed.

There are no chinook salmon in the McCloud River any more, they are extinct to the historic tribal land of the Winnemem Wintu people.

The tribe discovered by chance in 2009, that on the other side of the world in New Zealand, the ancestors of their chinook exist in our rivers.

New Zealand was the only country out of 13 that the chinook salmon were released in that they were successful in becoming acclimatised.

When the tribe learned of this they immediately made plans to visit their ancestral chinook salmon in 2009.

They held ceremony on the Rakaia River and prayed and danced for the return of their salmon.

This story is so much bigger than what I can tell here, however this is where we are at: 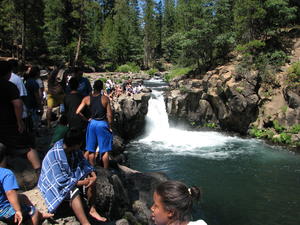 The McCloud River in California the origin of chinook salmon in New Zealand, the tribe have an annual trek which follows the historic migration spawning run of their lost chinook.

Funding from US fisheries agencies and a neighboring tribe has been granted to research the genetic comparison of the New Zealand chinook salmon, to those of the Sacramento catchment.

Ultimately it is hoped that New Zealand maybe able to return the magnificent gift of our Chinook to the Winnemem Wintu people, and their river of origin, the McCloud River.

Of course we do not have the abundance of chinook ova available these days, so a genetic family would be created by a small number of ova from late running fish, hopefully with Winter run genetic tendencies.

This ova would be grown in the US to create brood stocks, producing 100,000's of ova to re seed the McCloud river.

This information has been provided to anglers due to the fact that the tribe will be visiting us here in April for the planning of the genetic sampling project which will start in June.

Media coverage maybe prominent with this story, and it is fair that anglers are informed of the objective.

One thing is for sure, we have had a lot to be thankful for from this gift of the mighty chinook, and for New Zealand to be able to help repopulate the McCloud River would be an amazing thing to do.