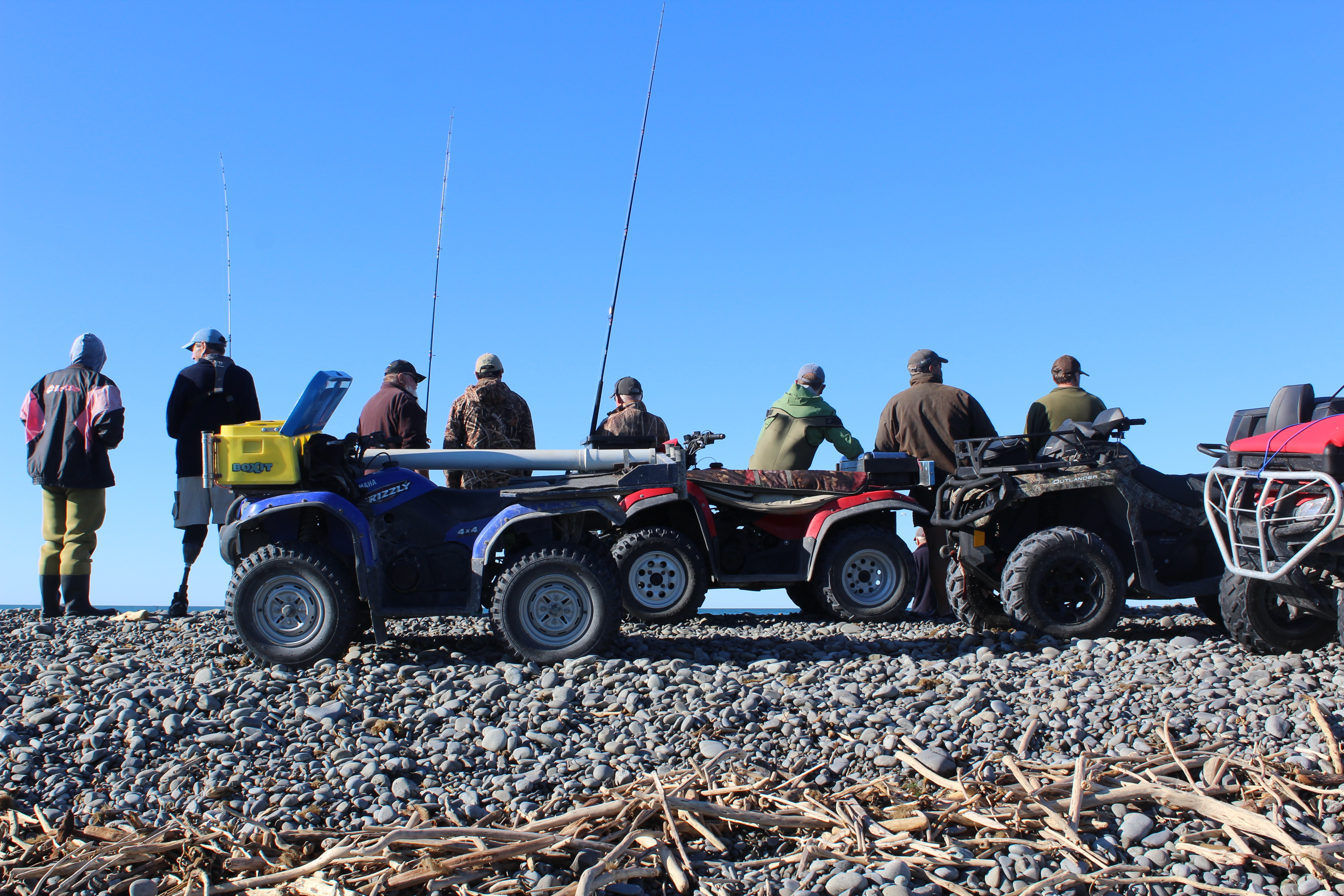 Dear Anglers, At the time of writing (Thursday morning)  there is a nor-west front making its way up the West Coast.

There has been no rain in the Alps behind Canterbury yet but there will be some later in the day.

The forecast is for 25 – 30 mm to fall before midnight, this amount may not have too much of an effect on our main snow fed rivers, and maybe be just  enough to provide some much needed colour to the current gin clear flows.

Above Right: The Rakaia River will be a hotbed of angler activity with the Rakaia Salmon Competition next weekend.

Then again if there is more than what is predicted, there maybe dirty water for a couple of days.

The Rakaia river is currently flowing at 135 cumecs and the Waimakariri River at the old highway bridge is at 35 cumecs.

The Waiau, and Hurunui rivers are also getting very low.

These low flows at present are concerning, as March is typically the low flow month.

The best chance of fishability for salmon over the weekend will be dependent on tonight’s rain in the divide.

Have a look at the ECan rainfall data and river flows on Friday morning, the front will have passed by then, being replaced by a Southerly.

The high country weather conditions should be pretty good this weekend.

The southerly may reach inland a little on Saturday morning but fade during the day, and Sunday’s forecast is for light winds.

Perfect for stretching a fly line, the Canterbury coastline is expecting a Southerly change tonight which will continue through Friday so surf conditions maybe rough for a day or two.

So as far as fishing prospects go this weekend, they are all pretty good, just watch that nor-west rain fall in the Alps which will occur before midnight Thursday.

Over 35mm at Arthurs Pass and Carrington will have a definite effect on river flows and fishability.

This weekend is a must for checking the ECan river flows website, and rainfall data.

These sites are really helpful for anglers and I'm sure have saved many turning up at the river to find it un-fishable, and from getting caught out on our riverbeds with rising water levels.

Where shall we go fishing?

A good place to take the kids out for a fish this weekend is Lake Georgina or Lake Lyndon.

These lakes are very easily accessible and both are within about an hour of Christchurch.

They are good places to learn to fish, sometimes it is more about favourable weather conditions for young ones, than how many fish are caught.

Its all the other things around the actual act of fishing also that make the day a success.

The anticipation of going fishing is a huge factor, the picnic lunch, a swim in the lake, playing with mates, the total outdoor experience! is what its all about.

This Sunday looks like a good learning day for the kids, light winds will certainly help their casting practice.

Other options will be Lake Coleridge this weekend, the lake is still producing consistent catches of nice land locked salmon and rainbow trout.

Trolling from boats is very productive, and fishing the lake edges near the Harper and Ryton river mouths can also be rewarding for the shore based angler.

Another exciting option for the young ones are the Kahawai shoals at our main river mouths lately.

Many generations of anglers have started their fishing experience by catching these very exciting and strong fighting fish.

Many anglers have also caught their first ever salmon when the target was actually catching Kahawai.

Keep an eye on the kids whilst fishing for them, as one might transform into something more serious.

I remember an old boy coming up to me at the Rangitata, when I was a ten year old fishing well away from the serious anglers near the mouth, “ you better be careful with that one sonny” he said. It happens time and time again.

Sometimes salmon are underneath the shoal of Kahawai!

The Rakaia River Salmon Fishing Competition is next week.

The annual Rakaia River Salmon Fishing competition has been running for the past 35 years, and over this time has been responsible for bringing hundreds of anglers together in one place, Rakaia.

The Rakaia river is undoubtably the salmon capital of the North Canterbury region, the competition has attracted anglers from all over the world, and brings around 750 senior anglers, and 100 junior anglers, to one little local hall to socialise, and celebrate our salmon fishery.

This event epitomises the promotion of salmon angling as a sport in this country. There is no doubt, the more people that even hear the words “salmon fishing” the better the chances are of successfully advocating for the protection of salmon, our paramount sports fish.

Your entry has more value than what you may think. Firstly, hundreds of anglers are standing together in one place. They are united by the passion of salmon angling!

Then there are the proceeds, or your entry fees, all of the funds generated from this event go back in to the river.

The passionate volunteers of Rakaia River Promotions have been promoting salmon angling for 35 years, and have created so much enjoyment for so many, through their hard working efforts.

When one competition finishes, within a couple of weeks, they are starting work on the next years event they deserve huge credit for what they contribute to our fishery.

For how to enter and more information click here.

The forecast for a public fin clipping weekend at the Montrose Hatchery is that it will be one of the first two weekends in April.

This will hopefully coincide with the first  salmon returning home to the hatchery also. Watch this space as a date will be confirmed soon. 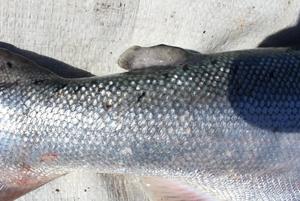 The photo on the left is of a salmon caught at the Rakaia recently.

The angler would not have recognised it as being a fin clipped salmon from Montrose, unless it was pointed out by an experienced fin clipper.

Of course the object of fin clipping is to remove the fin completely, however occasionally what can happen is that the curved shaped scissors can ride over the fin, particularly if they are blunt.

The most common result is usually a sharks fin effect which is still very recognisable,

In this case it seems that is more likely that a new helper actually clipped this one from the wrong direction, scissors facing the tail instead of the head.

Have a good look at the adipose fin when admiring your, or others catch, there may be the occasional one like this. 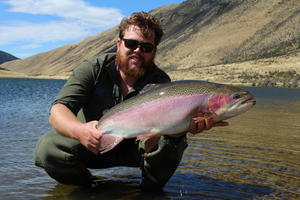 Ryton Barr with Jill and her tag.

On the eve of Waitangi day, and as a special focus for all anglers, North Canterbury Fish and Game released two massive rainbow trout into Lake Georgina.

These trout are tagged for identification, and the anglers whom catch these lucky tagged trout will win a prize sponsored by Hunting and Fishing NZ, Tower Junction.

There is a prize for each trout tag handed in, the prize pool has a  value of over $500

Walter and Jill are still at large! They will be well settled in now after eight days in the lake, and the chances of being caught are high as they settle into their new diet.

Reports from the Lake are that they have been seen, and Walter may have been lost by an angler.

Other anglers report catching two or three rainbow trout each, around the two-three pound mark.

This is a good fishing trip to take the kids on as they have a very good chance at catching them also, these trout will be something they will never forget.

Anglers will have a choice to let the fish go, or keep it. That is totally up to you. If your desire is to release it simply cut the tag off with scissors and bring it to the North Canterbury office at 595 Johns road to collect your prize.

Don’t forget to get a photo holding the fish. It is best to keep the fish, in the net, in the water.

The Rakaia, Hurunui, Waiau, and Waimakariri rivers have all produced salmon to date, and there have been some nice ones caught.

Numerous fish have been reported in the 18 – 20 pound range, with the heaviest one being a 24 pound fish from the Hurunui.

The Rakaia has fished well so far this season, followed by the Hurunui.

The Waimakariri has not fired up yet but an angler called in the other day reporting catching a fin clipped salmon at McIntosh’s, so there is the odd one there.

The Waimakariri is known for its later run peaking in March, and these hot days of late, creating warm river water in the lower reaches will not be helping.

Over the next week temperatures are forecast to drop substantially so keep an eye on things then.

Over the next few weeks there is great potential for some positive runs of salmon, as in late February more salmon should be starting to turn up.

please keep an eye out for any fin-clipped fish and keep this information for the end of season angler survey’s.

Up coming dates on the Salmon fishing Calendar.