Anglers flocked to the high country lakes and rivers in Canterbury at the weekend as the back country fishing season opened on Saturday.

Almost 1000 anglers headed to the Lake Coleridge area to try their hand at catching some salmon, brown and rainbow trout.

The lake about 90 minutes from Christchurch is North Canterbury’s most popular fishing lake and has attracted local anglers for generations.

Coleridge is one of the few lakes where an angler can catch all three sports fish in one lake.

Above right: Roy Thompson from Nelson, fishing at Lake Georgina. He had a successful morning, catching a rainbow trout.

North-westerly winds did little to dampen the enthusiasm of anglers and while boat-based fishers were hampered by the choppy conditions, shore-based anglers consistently reeled in good condition fish. 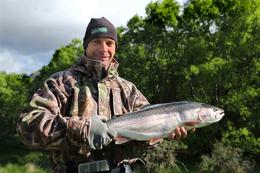 And more than $5000 in prizes sponsored by Hunting & Fishing Christchurch were given away at Ryton Bay on Saturday afternoon.

Anglers and their families are able to camp out in Ryton Bay thanks to the generosity of the owners of Glenthorne Station, who unlike many other landowners, have allowed anglers to continue a tradition that dates back many generations. 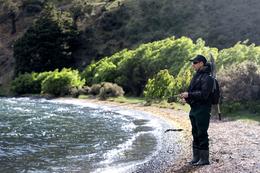 Fish & Game rangers turned out in force and checked 460 anglers on Saturday, but no offences were detected.