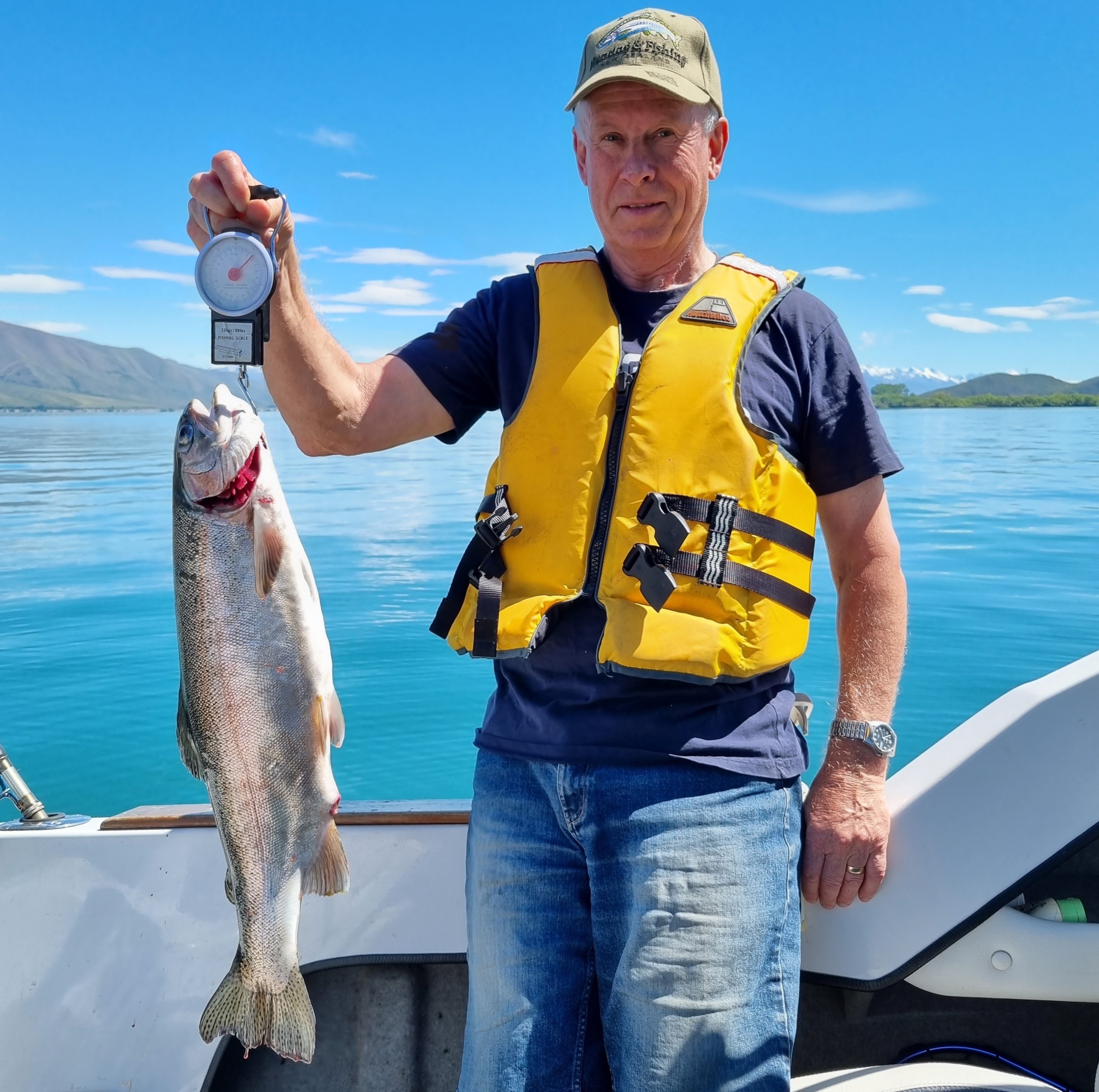 Big Rainbows at Lake Benmore and Ōhau B Canal

Two veteran anglers are claiming the rainbow trout are big this season at Lake Benmore.

Trevor Hendry has been fishing Lake Benmore for 27 years; this November, he and his 7-year-old Grandson, Jaxon White, caught a 6.5 and 5.5-pound rainbow, respectively.

Trevor claims these are the biggest rainbows he’s ever caught at Benmore.

Above Right: Trevor Hendry caught this 6.5lb rainbow at Lake Benmore this November.

Trevor and Jaxon trolled the lake’s Haldon Arm near Black Forest Station, targeting a water depth of around 5-6 metres and caught their fish on ‘Salmo’ lures.

Check out our monthly Reel Life newsletter here for a photo of Jaxon’s big ‘bow’.

The other report I had comes from a Lake Benmore local expert; I won’t name him as he said a few folks are already cottoning on to the fun he’s having by adapting a ‘canal method’ to the Lake.

Remarkably, he’s regularly been catching fish over 5 pounds this season; on one trip, he caught a 9-pounder and two others over 5-pound. 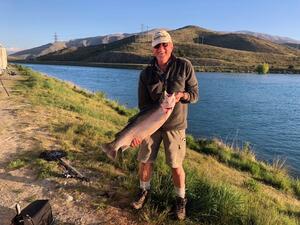 The unnamed angler reckons a gut full of large-sized snails has led to the exceptional size of some of the Benmore trout he has caught this season.

The next big rainbow report comes from Peter Fantham, one of the many anglers that stay at the Ōhau B Canal motor home park-up from time to time.

After finishing his evening meal, Peter wandered up the canal to the point of Lake Ruataniwha to try his luck drifting a shrimp for a salmon.

Although there was not much current in the canal and five other anglers fishing, Peter overrode his thoughts of giving it a miss and threw a line out.

Twenty minutes later, Peter was back at his motor home with a 17-pound rainbow trout and a small crowd of gob-smacked North Islanders lining up for photos of the biggest rainbow trout they’d ever laid eyes on.

Outlook for the Weekend

The weather looks to be a mixed bag this weekend; expect it to be both nice and wet at times and generally on the cold end of the thermometer.

Those of you heading to lakes and the Mackenzie Canals shouldn’t have too much to worry about if you’re well prepared for any sudden change in weather with warm clothes and a rain jacket.

If you’re planning to fish a river this weekend best to check the ECan Flow website beforehand.

Most rivers and streams in the regions have high flows currently; many though, are receding swiftly and are likely to be at excellent fishing flows this weekend – especially for bait and spin fishing and also fly fishing with artificial worm flies and streamers.

Not all CSI Region rivers can be bait fished however (including scented soft baits), so be sure to check your 2022/23 regulation guide before fishing.

Genesis are currently managing the high levels of Lake Takapō/Tekapo by spilling to the Takapō/Tekapo River via the George Scott Spill Weir – in effect, the river is in flood currently and is not suitable for fishing.

Spill flows may cause a bit of discolouration of Lake Benmore too around the Takapō/Tekapo River delta.

With all that water to manage too, you can expect the Tekapo Canal to have a fair amount of flow – this will help some forms of drift fishing.

Sea-run salmon anglers will have to remain patient, the Rangitata River is high and silty currently after a series of rain events – it won’t clear for a while.

These same rain events have affected our headwater rivers like the Ahuriri too; let’s hope it won’t affect the opening day of the upper river and tarns on the first Saturday in December (3rd).

Genesis wish to advise that there is now a 30kph speed restriction on the true right of the Tekapo Canal, (gravel side) through the Upper Tekapo Salmon Farm area due to safety concerns relating to traffic speed.

Environment Canterbury have advised their fairway weed spraying program is to commence on various rivers to allow for flood conveyance and stop the spread of the pest plants.

This will involve a tractor and trucks when required, spraying the pest plants within the active fairway of the rivers.

Signage will be put up at all access points to the rivers to let people know that vegetation has been sprayed and spraying is in progress.

The areas ECan are planning on targeting are as follows 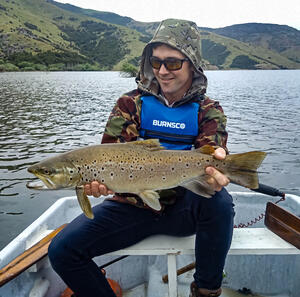 Cohan Ryder caught this beauty of a brown in Lake Forsyth, weighing in at 2 kg or 4.5 pounds.

This fish is an excellent example of what can be caught in our lowland fisheries.

And it’s a timely reminder that there are some great fish to be caught close to the city.

With unstable weather conditions like what we are experiencing at the moment, the regulations book can be a great place to start if you are looking for somewhere to fish.

As we say in Fish & Game, “every bridge you cross is a fishing opportunity,” and with this weekend being a question of finding a spot not affected by the weather, it’s time to do a bit of exploring and checking out some new areas.

Fish & Game Officers Harry Graham Samson and Matthew Garrick were out around Te Waihora/Lake Ellesmere yesterday and were pleasantly surprised to find a few anglers out and about checking out the lake and its tributaries.

All anglers checked had their licences on them and were seeing a reasonable number of fish to keep their interest peaked.

We are still getting reports of salmon being seen in the region, but it will be next week before the rivers are fishable and someone is lucky enough to catch the first salmon of the season.

Some anglers have been asking if the Rakaia Salmon fishing competition is on this summer.

The Rakaia competition is the largest freshwater fishing competition in New Zealand, attracting over 700 entrants yearly.

Also, next year will be the 40th anniversary of this great celebration of the Rakaia River and its salmon fishery.

Rakaia River Promotions (the organisers) will be putting out more details soon but bookmark their webpage to get the latest info.

At Fish & Game, we occasionally get asked about how we can support salmon competitions when the sea-run salmon runs are under threat. 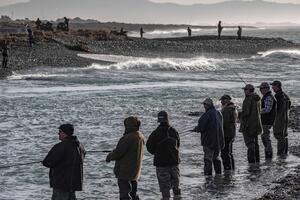 Anglers at the Rakaia mouth during the 2020 Competition.

For anglers to enter the Rakaia Competition (which has some fantastic prizes on offer), they must not only show their valid fishing licence they must also present their correctly filled out sea run salmon harvest card to enter.

It’s important to remember the goal of the season bag limit is to help increase the number of fish returning to spawn.

Last season the reduction of angler harvest from over 50% of the run on some rivers to less than 20% which demonstrates that the season bag limit is working, and more fish are reaching the spawning grounds.

Volunteer of the Year - Bob Loasby 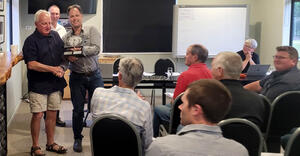 Bob has been a stalwart of the North Canterbury Fish & Game Ranging team for over 25 years.

Unfortunately, some recent surgery has meant that Bob is not as mobile as he would like to be for ranging, and he has handed in his warrant after many years of dedicated service.

His wisdom, sage advice and experience have helped countless new Rangers to Fish & Game over those years. In addition, he has helped out by being a member of the Compliance Review Committee, which provides advice on prosecution decisions.

Bob has also helped out when North Canterbury Fish & Game has needed an extra set of hands, be it fishing competitions, fish salvages or angler education.

His support has not gone unnoticed, and for that, we wish to thank Bob with the awarding of the Ian McCory Volunteer of the Year trophy.

If you have any recent photos of your fishing exploits or fishing events you want to publicise, send them to northcanterbury@fishandgame.org.nz ; even if they aren’t from our region, I’ll pass them on so they can get used.