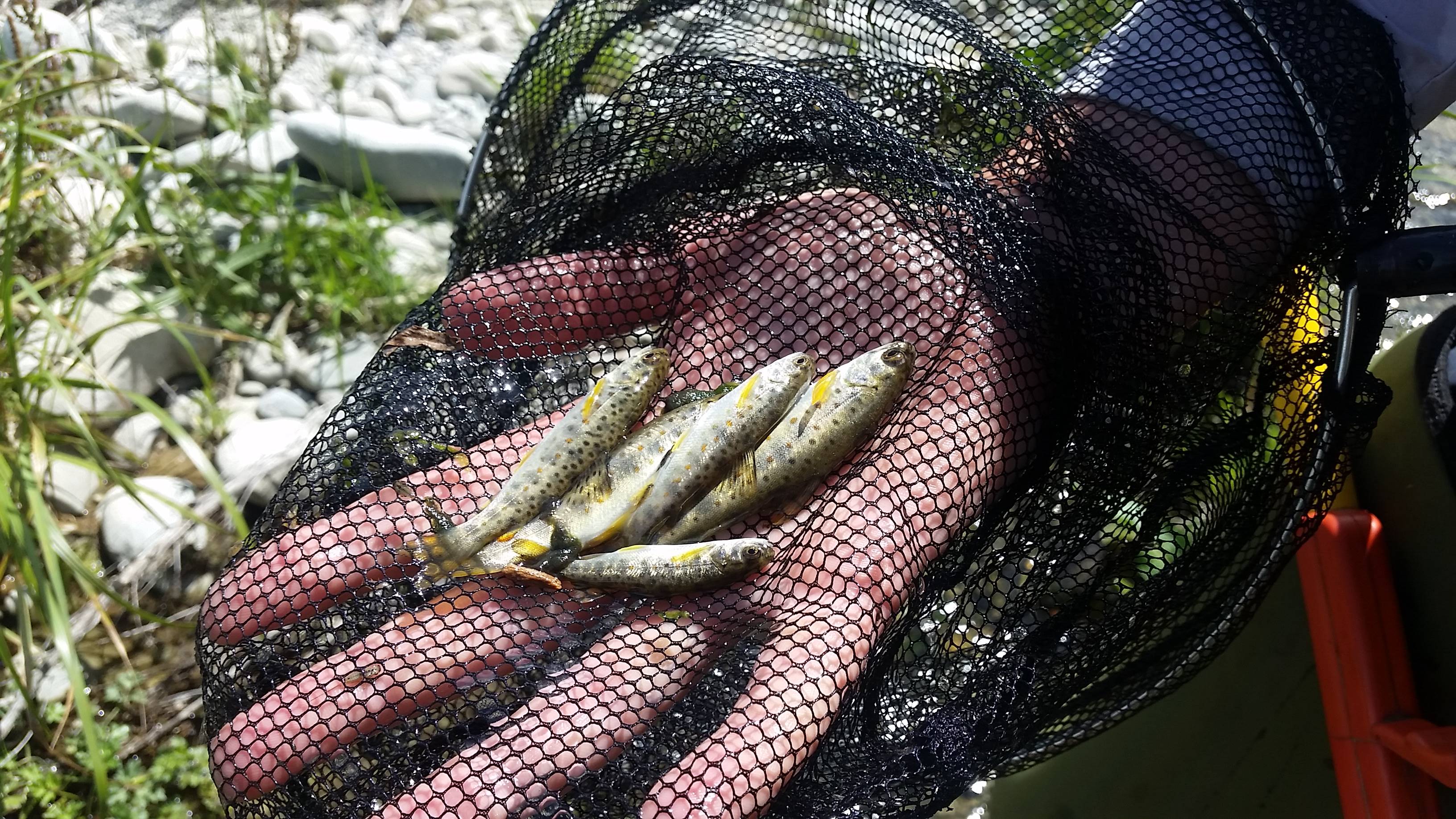 Over the past couple of weeks, we have been spending a fair chunk of our time electric fishing waterways around our region in the search for juvenile salmon and trout.

A major ongoing project we have is counting, weighing and measuring trout we catch from all around the Opihi Catchment.

These trout were born last year and the year before and we are looking at how their growth is tracking compared to optimum rates.

Above Right:  Hamish Stevens with a handful of juvenile trout from a Lake Opuha Tributary (Photo- R Adams)

We can work out the optimum growth rates by using data collected by ECan on temperature and invertebrates present at each site.

As we build up this dataset it can help us to understand the limiting factors of trout populations in some of our key fisheries.

The project hasn’t been running long enough to come up with these answers yet, but it still provides us valuable information on the juveniles present and gives us a rough guess of what to expect over the next few years.

Most of our sites on the Opihi Catchment had good numbers of juvenile trout present this year.

We put this mostly down to the wet summer we had this year.

In hot years we are often out salvaging trout from drying up pools on the rivers.

Even if we manage to rescue them all the effect on the fishery is huge.

We believe it probably takes a couple of seasons of constant flow for the fishery to bounce back.

We also went for a look further inland as part of monitoring the Lake Opuha fishery.

As we worked our way down the tributaries, we noticed an increase in the number of juvenile trout.

This probably means the trout are heading down to live in the lake.

If you are up at Lake Opuha over the next month, it would be definitely be worth having a crack at the larger fish that are likely to be waiting at the drop-offs for an easy feed of young trout.

Take care round the river mouths flowing in to Lake Opuha as there are quite a few submerged trees waiting to steal your lure or scrape up your boat.

Further south, we spent a few days with volunteers out on the Hakataramea and the Waitaki river.

The aim of the mission was to get a snapshot of the juvenile salmon on their journey to sea.

We were unable to track down any salmon which was surprising even considering the spawning numbers last year were low.

On the upside we found large numbers of well-conditioned juvenile brown and rainbow trout.

At most accesses on the Waitaki we found lots of small vegetated braids and back waters; perfect juvenile rearing habitat.

We also saw good numbers of adults in some of the medium sized braids and backwaters.

Fishing the Waitaki can be tough and often it’s a case of checking multiple accesses to find one that suits your style of fishing. 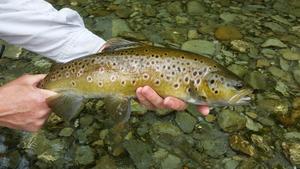 Often these spots will change as river flows fluctuate.

Despite the difficulties involved, I have no doubt that the are large numbers of trout on the Waitaki that won’t have seen an angler this season, so there is some rewarding fishing for anglers willing to do a bit of exploration.

If you’re fishing the in Waitaki area and catch a fish with a yellow tag near the dorsal fin, please flick us an email with the or call the office on (03) 615-8400.

It looks like it’s going to be a hot one this weekend, so make the most of it and get out for a fish, Autumn is just around the corner.

Note: At 7pm on Thursday the 14th of February there will be a Fish & Game Council meeting held at the CSI F&G offices: 32 Richard Pearce Drive, Temuka. Licence holders and members of the public are welcome to attend.