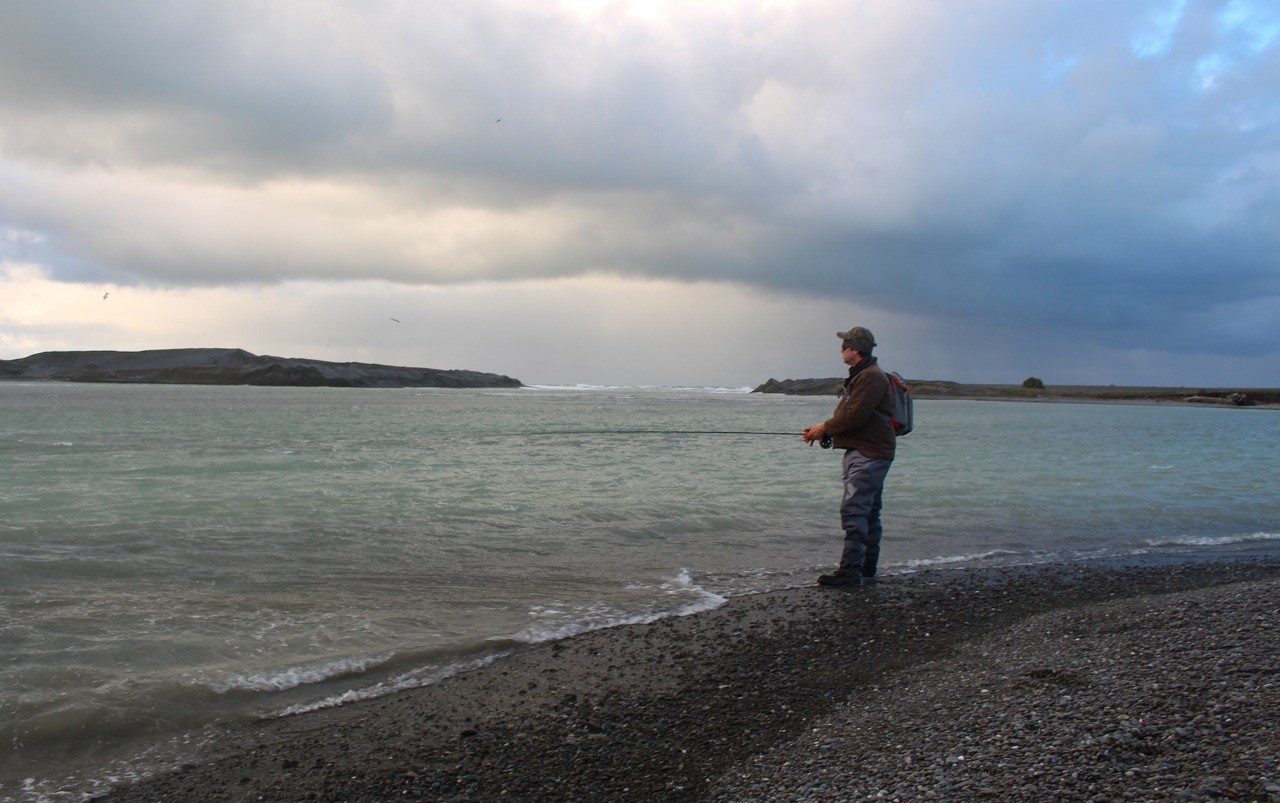 For myself, as with many fly tiers, the most fun part is going through new phases of exploration and experimentation often inspired by the use of new materials.

Top right: the stage...often vast, wild and windswept and that's why we like it!

So a perfect stage was set in recent years when I found a passion for fishing large articulated streamers (combined with inspirational materials to simulate the body parts of a fish) in the  South Island, targeting our lesser known sea-run trout.

So the drama began. Let me set the scene…these vast estuaries, coastal lagoons and lakes are alive with baitfish that are aggressively predated by trout. So to the ear, its seagulls married with the sounds of ocean waves crashing, a far cry from the inland mountain stream sight fishing we mostly do here in NZ.

The challenges often faced as a fly tier and angler in these coastal situations are twofold. Firstly, the water is often discoloured, making it hard for the trout to see any real distance. Secondly, the trout populations are not high, which means that anglers often have to work long and hard to get results – especially when using more regular streamer patterns.

We started off like this blind fishing for hours, covering water, getting the odd nice fish and as we did so a whole act of inquiry was born. We needed to develop better patterns that would have more potential to be noticed by the trout in the vastness of discoloured water. Of course it was important that these patterns should resemble the baitfish species present. So the drama continued...

Over time, we thought it would be prudent to take some time away from just fishing to further investigate the baitfish these trout were mostly feeding on, which would happily lead us to a better understanding of the situation. Armed with nets, tanks and cameras we found the baitfish to be a smelt species common throughout New Zealand with very similar types found throughout the world.

These observations gave us great clues to work on in developing better patterns; in particular, colourations combined with large 3D eyes undoubtedly improved results. But I still felt for much of the time these single #8-4 patterns were not grabbing enough attention. We needed more drama ! More noise, more size , more caricature…heck, MORE DRAMA !!!

The act of inquiry begins...

So smelt was the main character in the drama.  And as serendipity would have it, I was introduced to Flymen Fishmasks right at that time, which would become integral in the Helter Smelter, a pattern that went on to prove its worth time and time again.

The concept started with the notion of chaining two

smelt patterns together in articulated form, especially as the smelt often swim in schools. Of course I knew it would be easy for trout to locate such a pattern in discoloured water. Incorporated into this fairly standard streamer was the colouration of bait fish. Importantly, their wide profile and accentuated silver eyes was achieved with the fish masks and I really feel the idea of having two sets of eyes to be very attention-grabbing for predatory trout. And so the notion of trout fly drama (to be expanded on) and Helter Smelter pattern were born and have proved a lot of fun to fish.

You can apply this principle to other bait fish patterns and mix up the colours and sizes of both the sections. For example, use a larger fish mask on the back section and a smaller one at the front to achieve a food chain effect and create your own drama...this is merely act one of the Helter Smelter for me :)

Some coastal drama as this fantastic South Island New Zealand fell to the Helter Smelter .

Notice the discoloured water we are fishing in.

Enjoy the drama this coming season ...