Game bird hunters prepared to help Fish & Game in their ongoing duck research – have the chance of winning one of the latest camo’ hunting jackets. 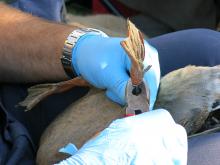 Hunting & Fishing New Zealand is again sponsoring the Banding Together programme in conjunction with Fish & Game for a third year running. Hunters who send in their band details by the end of August go in the draw to win one of five Matuku camo’ jackets valued at $199 each.

The nationwide retail company’s Marketing Manager, Andy Tannock, says the company is again pleased to be able to contribute to the “very worthwhile” Fish & Game programme that gathers crucial information on the mallard harvest.

“We are well aware of the big research picture – in particular, Fish & Game’s mallard telemetry or tracking project is entering another phase after two years of intensive monitoring and data collection.

“Mountains of data need to be analysed.”

But Mr Tannock says that the information gathered via the banding programme is also important – and continues to play a vital role in keeping track of harvest information and mallard population trends.

“By helping Fish & Game pull in as much information as possible we are well aware that we are contributing to management decisions that will benefit us all as hunters.”

“We’re again very pleased to have Hunting & Fishing New Zealand on board with this project – their willingness to assist us for now, a third year in a row, is highly valued.

“We simply ask hunters to do their bit and return band details – the data remains crucial and as we’ve noted, complement the findings coming to light from the new telemetry tracking of mallards and other research.”

Mr Tannock says the prize draw works simply, in the same way as last season. Hunting & Fishing New Zealand is offering another five of its Matuku camo’ jackets as prizes for the season beginning Saturday May 7, 2016. Hunters who return their band details by August 31, 2016, go in the draw to win one.

Mr Tannock says the camo’ jackets are an awesome prize. “The name Matuku means bittern in Maori, the wetland bird is regarded as a master of disguise.

“The Matuku camo blends into New Zealand wetland or alpine backgrounds better than any American pattern as it is created from high-resolution shots of actual NZ swamp and tussock vegetation. ”

This competition is now closed.