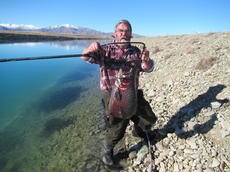 The 2017/18 season ended with a flourish. A wetter than usual summer and autumn resulted in excellent stream flows right up until the end of April, and this was reflected in some of the best mayfly hatches in years in lowland streams throughout the area. The trout responded accordingly. Since then though, the region has experienced abnormally dry, windless conditions right up until the time of writing in the latter part of August. All the region’s waterways are running at low levels. On the plus side spawning success should have been exceptionally good, compensating for the massive July 2017 flood that wrought enormous damage. Nature has a way of redressing the balance it seems. However, spring rains may change things again.

During the winter season many local and visiting anglers target the massive trout of the Mackenzie Country canals. With limited options otherwise, I join them occasionally. Some time ago I wrote an article for Fish & Game’s magazine reporting on the canal fishery, and bemoaning the fact that I was finding the fishing patchy and difficult to fathom. Since then, with the help of some good friends and by talking to successful anglers I feel that I’ve gone a long way towards ‘cracking the code.’ I haven’t kept records but in just 15 days over about nine months I’ve landed literally dozens of double digit trout (all rainbows) and a significant number of fish in excess of 9kg (20lb) including three over 13.5kg (30lb). This is simply a world class fishery but I have some concerns that I would like to share.

Forget about solitude up there now. One day at Queens Birthday Weekend I counted over 30 rods on just one much favoured stretch. Even the more isolated and hard to get to places are receiving attention now. Sadly, a small cohort of ‘fish hogs’ have also discovered the fishery. While most of us enjoy an epic battle with some of the biggest trout in the world, have a photo taken and then carefully release them a significant number of anglers are keeping spawned out fish in the mistaken belief that they “will smoke up well.” In fact the opposite is true. I made that mistake once and was bitterly disappointed in the results. The fish was pale-fleshed, ‘oily’ in texture and quite rank tasting. I’m ashamed to admit that the bulk of it got dumped; a terrible fate for a truly magnificent fish.

A bit of advice…if you are fortunate enough to hook into a real canal monster do your best to subdue it as quickly as possible. I do not subscribe to the use of excessively light tackle. I’m catching plenty on high abrasion resistant 4.5kg leaders. Use a large net and if possible have someone land the fish for you. I’ve helped many anglers who found themselves miles away from a net. Take your pics quickly and get the fish back in the water. Cradle it until it’s ready to swim away and never, ever touch the gills with your fingers as this will surely cause its demise.

Most of the winter fish being caught are in spawning mode. My colleagues and I recently moved away from the main spawning areas deliberately, and it’s paying off. Constantly harassing fish on the redds is simply not ethical. If an eating fish is the object look at taking a smaller one. Given the superb water quality coming out of Tekapo, Pukaki and Ohau the trout taste simply great outside of spawning time. Look for those not too ‘coloured’ up or really dark. Fish caught close to the salmon farms are less likely to be in spawning mode.

And the secret weapon? I’ve found that egg imitations work well but other friends swear by streamer flies, soft baits, imitation worms and shrimp. I know anglers who fish nothing but nymph patterns. The key it seems, is presentation. As in most forms of fishing 90% of the fish seem to be caught by 10% of the anglers. Newcomers would do well to observe just how that 10% of fishers set up their gear and how they deploy it. It’s not rocket science but there are some subtleties that need to be applied to consistently achieve success. Takes can be very soft but there will be no doubting that you have hooked up when something akin to a Mack truck heads off to the far side of the canal. Enjoy the ride!