The Government is being urged to heed Parliament’s environmental watchdog’s call to better monitor and protect New Zealand’s environment, including addressing public concerns over whether it is safe to swim in rivers and lakes. 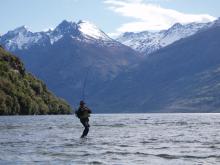 The call for more action by the Parliamentary Commissioner for the Environment comes in her detailed analysis issued today of the government’s Environment Aotearoa 2015 report.

"Dr Wright has clearly identified the challenges New Zealand needs to face up to if it is to protect its environment.

“Time is running out to address many of these issues and requiring the Secretary for the Environment to start reporting to her minister and the public on priorities will add a discipline that has not been evident before,” says Mr Johnson.

Bryce Johnson says the commissioner is also right to question why the Environment Aotearoa 2015 report omitted addressing public concern over whether they can swim in this country’s waterways.

“The government’s proposal to require rivers to only be wadeable would effectively be a terminal life sentence for our waterways and enshrine the right for polluters to pollute,” Mr Johnson says.

“New Zealanders are becoming increasingly angry and frustrated that the clean water they once took for granted is disappearing. They are right to demand better water quality and rivers, lakes and streams where they can swim, drink from and gather food in," Mr Johnson says.

The Parliamentary Commissioner’s concern over the high level of erosion and the resulting sedimentation of waterways is also strongly supported by Fish & Game.

Bryce Johnson says sedimentation has been the elephant in the room when considering ecosystem health and is long overdue for attention.

“Sediment is being washed off the land into waterways, clogging many streams, rivers and estuaries, smothering the life there. Fish & Game fully supports the commissioner’s recommendation for more attention to be focussed on the problem and that officials provide better reporting on it," he says.

Fish & Game is calling on the government to accept the Parliamentary Commissioner for the Environment’s recommendations and act on them.

Bryce Johnson says while it is unclear at this stage how the Secretary for the Environment will implement the recommendations, as a statutory body, Fish & Game expects to be involved in that process.