New Zealanders who want to help protect some of the country’s most important environmental areas are urged to buy the latest Fish & Game habitat stamp being launched today (Tuesday 2 Feb, 2016) to mark World Wetlands Day. 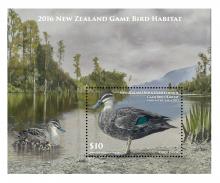 The new Game Bird Habitat Stamp 2016 features the grey duck or parera in a painting by Whangarei artist Sandra Whyte. The Game Bird Habitat Stamp programme was set up to raise funds – from the sale of the game bird hunting licences, stamp collection and related products – for projects aimed at protecting and enhancing wetlands and game bird and other wildlife habitat.

“Wetlands are vital for wildlife because they provide valuable habitat for native species. The general public can buy the stamps and other products too,” Mr Johnson says.

“I urge them to buy a habitat stamp because very dollar helps preserve wetlands and establish new areas for birds to shelter and breed.”

It’s one small simple way to give some direct support to habitat protection, and there are lots of choices – from a $10 stamp up to $65 for the limited edition print, he adds.

This year’s theme for World Wetlands Day is Sustainable Livelihoods. Mr Johnson says that Fish & Game has a hand in many wetland projects around the country ranging in size from the Para Wetland in the South Island, New Zealand’s largest remaining lowland wetland, largely owned by Fish & Game, to the likes of Awakaponga Wildlife Management Reserve in the Bay of Plenty.

The Fish & Game project at Awakaponga near the Tarawera River features an innovative water supply system which makes use of solar energy and air-lift technology. Fish & Game Chief Executive Bryce Johnson says it’s a great example of a sustainable approach, with the use of renewable energy, to sustain a wetland area which had been prone to drying out in summer.

With financial help from Bay of Plenty Regional Council Environmental Enhancement Funding, Fish & Game launched an enhancement project in 2004 for the area, which has become a wetland highly valued for waterfowl breeding and hunting. The work included removal of willows and other pest plants, and physical works – excavating the old oxbow and surrounding areas, creating tracks, planting, and installing a new water supply culvert.

“As an isolated site, the challenge was to come up with a water supply system, preferably using renewable energy which was reliable, maintenance free, and with minimal ongoing costs,” Mr Johnson says.

“The system works by bringing water up from the Tarawera River to feed the wetland. The result was enough flow to ensure that water remains throughout the year, instead of the area drying out every summer.”

Mr Johnson says that various water supply options had been investigated included electric pumps powered by solar, wind and grid supply, wind turbine and river turbine systems. But one of the main reasons for trialling the solar-powered system included its potential use at other wetlands “at an affordable cost.” The reserve appears to be an important breeding site for mallard and grey duck, but it is also frequented by a whole host of waterfowl species, including pukeko, paradise shelduck, dabchick, and white heron.

“Fish & Game, and game bird hunters, are proud to have played a leading role in wetland protection and conservation – managing and creating numerous wetlands in many parts of the country through the distribution of funds raised through the sale of the Game Bird Habitat stamp.”

The Game Bird Habitat Trust has supported many projects on both public and private land and landowners can apply for grants to enhance or develop wetlands before the end of June. Application forms can be found on the Fish & Game website, www.fishandgame.org.nz