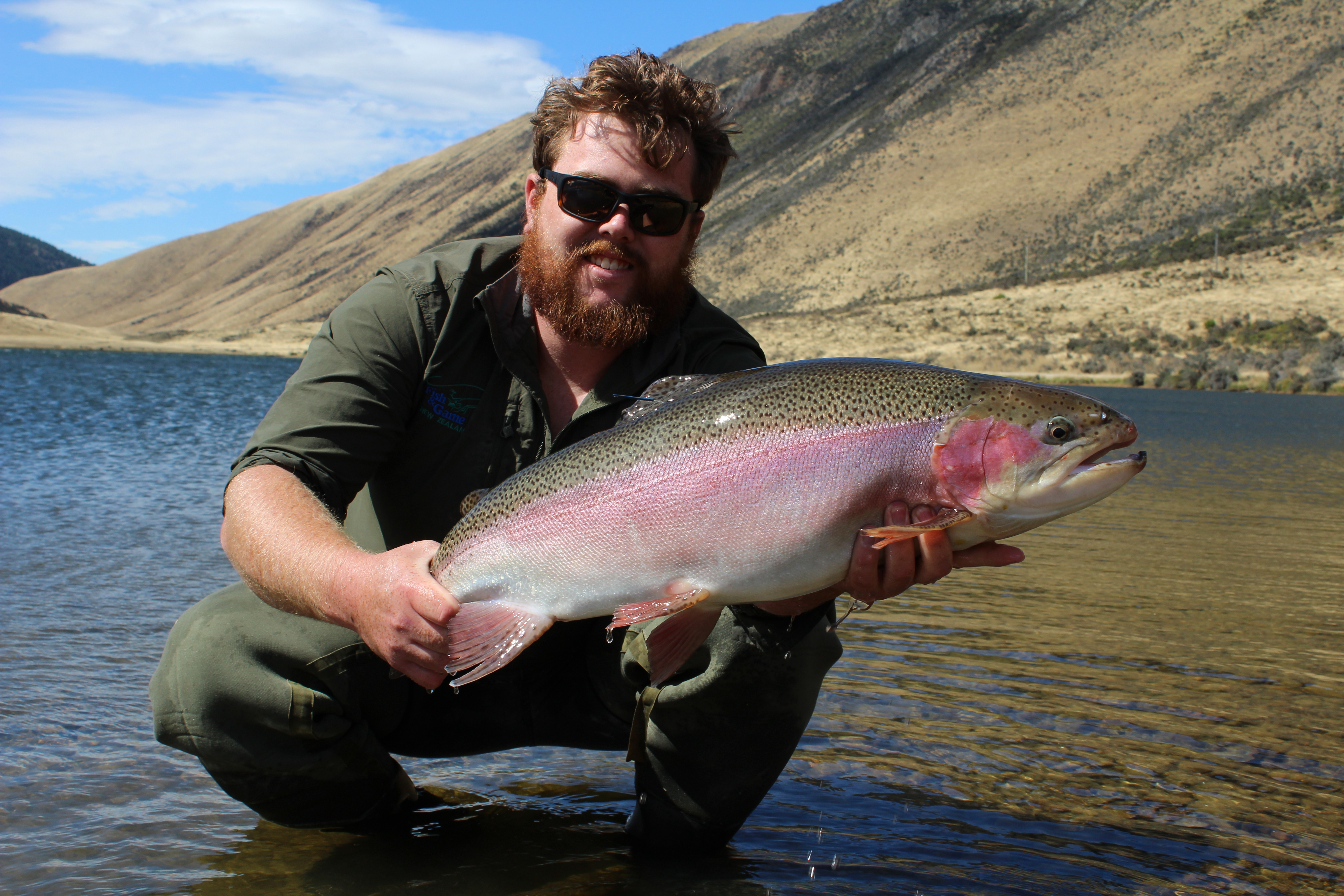 Hello and welcome to the North Canterbury region fishing report, It’s going to be another scorcher this weekend.

Hot blustery North West winds with temperatures on the plains set to reach the 30s again.

All rivers are clear and fishable at the moment and will remain so heading into the weekend.

Above Right: Two monster rainbows were released into Lake Georgina on Tuesday, pictured here is "Jill" who weighed in at 15 pounds before here release with "Walter", both fish are tagged and anglers can win a prize for catching them, find out more below.

The main alpine rivers are now dropping fast so will be even clearer by the weekend.

Salmon are being caught in the Hurunui and Rakaia Rivers.

Especially during the cooler days this week.

Early morning starts are a must as the water will be at its coolest then.

There looks to be some rain forecast on the main divide which will hopefully bring a much needed fresh for these rivers.

Look out for that either Monday afternoon or Tuesday morning.

Foot hill streams are holding their flows well despite the hot dry weather.  The Ashley is still around 3 cumecs at the Gorge and the Selwyn is around 1 cumec at Whitecliffs.  Those flows are reasonable for this time of year.

I visited the Ashley this week and found a reasonable number of trout through the middle reaches.

They were actively feeding under the willows.

The cicadas were deafening but they didn’t react much to cicada imitations.

What they were actually feeding on was willow grubs.

One trout was so intent on feeding on them it was even rising to leaves that were falling out of the tree.

When trout are in this mood they can be very selective.

You don’t always have to match the exact species they are feeding on but you do have to watch what size of fly you use.

Just be aware there is a cyanobacteria warning for the Ashley at the moment.

It is best to get familiar with the toxic forming weed mats yourself rather than rely on a press release as they can happen anywhere in the catchment and there are only a limited amount of sites monitored.

Be especially careful if you take your dog fishing.

If you do fish the Ashley over the next couple of weeks, NIWA is undertaking a tagging exercise throughout the catchment.

The purpose of which is to monitor trout movements through the catchment as flows get lower.

So you may see the team trying to catch trout at the main access points.

If you happen to catch a trout with a tag in it, please release it again if possible as the trout will be tracked throughout the catchment and will provide some useful information.

The high country is likely to be windy this weekend.

The best chance of a calm period may be Saturday morning.

Otherwise the wind is going to be gale force by Sunday afternoon.

The lakes are still fishing well.  A lot of surface activity in the evenings with the warm weather.

This weekend spin fishing to trout cruising the waves might the best method.

As the Hurunui and Waiau flows drop it will provide anglers with an opportunity to explore the middle and lower reaches of these rivers.

They both run through gorges in the middle reaches that offer great water for spin fishing.

Even the braided areas of the Waiau can be surprisingly productive.

Look for water that runs under willows at this time of year.

As a special focus for all anglers, North Canterbury Fish and Game released two massive Rainbow trout into Lake Georgina.

These two trout are tagged for identification, and the anglers whom catch these lucky tagged trout will win an amazing prize sponsored by Hunting and Fishing NZ, Tower Junction.

Mums and Dads, make sure that the reel drag is not set too firm so that when a fish takes the impact does not break the line.