Fish & Game officers have used a boat to release fish “far and wide” on Lake Tarawera this week. 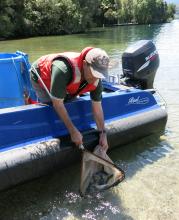 The young rainbow trout are normally transported to the various lakes in the ‘live trout truck’ equipped with oxygen-fed tanks.

Fish & Game officer Matt Osborne says the 1,000 fish were carried out by boat as part of their spring releases, so they can easily reach areas that can’t be accessed by road.

“We released the fish off three stream mouths, Waitangi Stream, Twin Creeks and Wairua Stream, to enhance the autumn shoreline opportunities for anglers.

“Hopefully these fish will return as three or four-olds to the places they were released, to spawn.”

Mr Osborne says the boat release is part of efforts by Fish & Game to provide opportunities for anglers to catch quality fish by boat and shore-based methods throughout the season.

Lake Tarawera is currently experiencing a decline in trout growth which has been seen throughout the year classes, he says.

"Fish & Game acknowledges this decline and is making some slight tweaks to the liberation strategy to try and address the issue."

The young fish are transferred from the trout truck to an oxygenated tank on board the boat, and transported out to the stream mouths for release using a net.

So far around 40,000 trout have been released into Rotorua lakes as part of the spring liberation programme.

Holidaymakers are reminded that Fish & Game’s new licences are available on our website (see right) and in accredited sports shops and other outlets.