Fish & Game is calling on the Department of Conservation to do more to reduce the threat 1080 poison poses to people gathering food from waterways, saying its present effort is inadequate and self-serving. 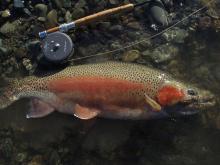 On the eve of the trout season opening, DoC has just issued a warning to trout anglers not to eat trout from 1080 drop areas for a week after a poisoning operation.

DoC says while it believes it would be rare, it is possible for an angler to be exposed to risk from 1080 by eating a trout which had consumed 1080 bait.

1080 is presently being dropped as part of the national “Battle for the Birds” campaign to control predator numbers.

DoC’s health warning comes after Fish & Game raised serious concerns with both DoC and the Ministry of Primary Industries about the health threat anglers were exposing themselves to by eating trout which had consumed 1080.

“Fish & Game questions the basis of DoC’s advice and believes to be on the safe side, the waiting period needs to be much longer. We recommend instead that anglers wait for a month after a 1080 drop before eating trout from a poisoned area,” Mr Johnson says.

And he says DoC could do much more to reduce the health threat.

“Fish & Game has trialled how attractive 1080 baits are to trout and unfortunately we have found they will eat them.

“As a result, we have asked DoC not to drop 1080 into or immediately beside rivers and streams. The technology to do this is readily available and is already used in aerial poisoning operations along conservation land boundaries to stop 1080 falling onto neighbouring proiperties.”

“We thought we had reached agreement in talks with DoC last week for this to happen but DoC now appears reluctant to commit itself to this course of action and we must now assume it has failed to instruct its helicopter operators dropping the 1080,” Mr Johnson says.

“We are especially concerned DoC is conducting a major 1080 drop in trophy trout waters such as the Kahurangi National Park over the opening period of the trout fishing season. These rivers and streams attract local and international anglers who value them highly, yet now face a co-ordinated poisoning operation.

“I expect they will be pretty disgusted if they are showered with 1080 pellets as has happened in previous years.

“We don’t oppose efforts to save New Zealand’s indigenous species but are seriously worried by DoC’s inability to organise a poison drop at a less sensitive time of year,” Mr Johnson says.

Fish & Game is now calling for more research into how susceptible trout are to ingesting 1080 and the health threat posed by humans eating freshwater fish exposed to 1080.

“There is uncertainty around the existing science. What we need is more robust scientific research to be undertaken to establish once and for all what the risk is to humans and freshwater species like trout and the best way to mitigate that risk.

“That will ensure the long term safety of all people gathering food from rivers, lakes and streams,” Mr Johnson says.